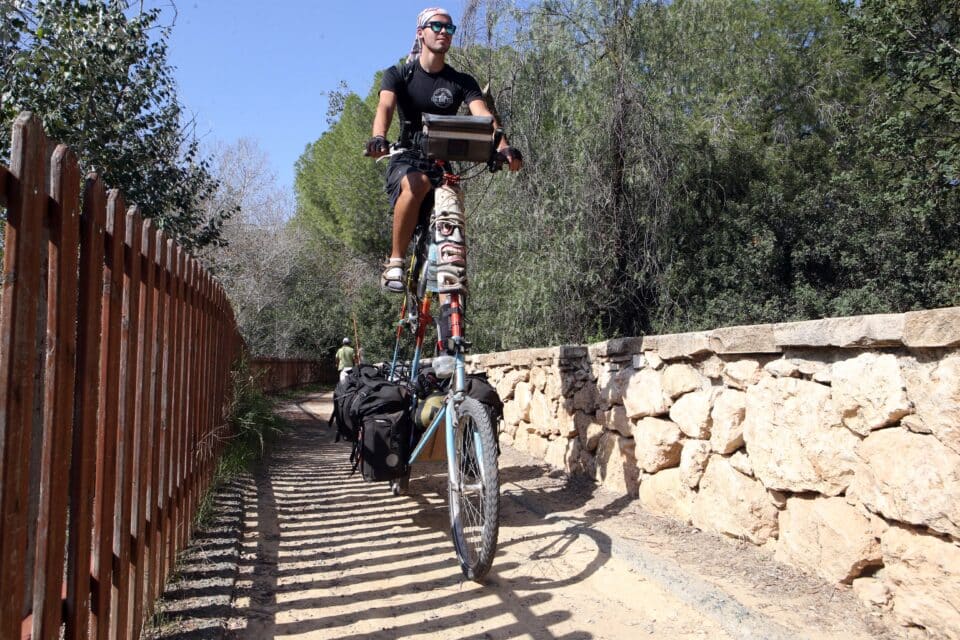 Expanding his tour around Europe to take in the rest of the world, one travel enthusiast has now reached the island. If you haven’t already seen him round Cyprus, you soon could as he is hard to miss finds ALIX NORMAN

Currently en route from Europe to Asia, Alex is one of a handful of tall bike enthusiasts – people who build and ride outsize bikes! But while most aficionados remain fairly close to home, Alex has ventured out from Dereham, Norfolk to take on the world by tall bike, one thrust of the pedal at a time. And, for the next few months, he’ll be in Cyprus: overwintering and enjoying the sights before he sets off once more on his Tall Bike Tour of the planet!

It’s an unusual hobby. But then Alex is an unusual young man. Half-English, half-Italian, the 19-year-old has had had a passion for building tall bikes ever since he rescued a broken BMX from a junk heap at the age of 11 and welded it to another bike frame. He’s been at it ever since, using his remarkable ingenuity to add scooter wheels, bits of broken Tesco trolleys, and odd handlebars to his singular creations.

It makes, he reveals, for a unique experience. “I remember the first time I rode a tall bike, I put it against a pole, climbed up and set off. It was brilliant, a totally unique experience! Until, that is, I reached the traffic lights, had no means of balancing, and gently fell off!”

Over time, and with nine tall bikes to his name, Alex has mastered the skills required. And he’s gradually taken on longer journeys: day trips to Norwich soon became overnight journeys to Cambridge, London, Bournemouth and even Scotland. And then, in January 2022, he set off to see the world from atop Mambo No 5, a tall bike named for her tropical decoration…

“I left the UK in January with £100 in my pocket, most of which went on the ferry ticket to the Netherlands,” he reveals. “I did work-away in Amsterdam for a while, caring for animals and children in return for board and lodging. And I also busked at the weekend. By the time I left on May 1, I had €450 – which got me as far as Switzerland, where campsites alone cost upwards of €40 a night!”

Wherever possible, Alex has been saving money by setting up his tent in the parks or forests of the places he’s visited: Germany, France, Switzerland, Lichtenstein, Austria, Slovakia, Hungary, Croatia, Serbia, Bulgaria, North Macedonia, Greece and Turkey. He’s taken on work where he can (an accomplished pianist, he’s just spent two days busking on Ledra Street) and set up a donation site that contributes towards basic costs. “And there’s a cup on my bike with a brief explanation in the local language; people can throw in a couple of euros if they’d like,” he adds. “But mostly, I’ve never had more than €100 to my name at any one time.”

It’s an epic undertaking, especially on a bike that’s not easy to handle. At the start of his journey, Alex set himself the task of travelling every mile on land “by human power only. So no lifts, no trains, no attempts to hitch-hike! It hasn’t made things easy. In Macedonia I found myself at the summit of a massive mountain only to discover my rear brake discs had worn down. The descent involved twists and turns, and night was fast approaching, so I put out an Insta call for help. A couple of local tall bike enthusiasts came to rescue me in a huge Landrover. I let them take my bags and my dog, and they lit my way down with their headlights: I reached 80km/hour down that hill – it was hairy! But my dog was safe, and that was what was important!”

Nova, a Collie-Lab mix rescued on the Serbian border, is one of the reasons Alex is wintering in Cyprus. “Originally, I’d planned to travel as far as Turkey, so I could say I’d made it to Asia,” he explains. “But somewhere along the way, I decided I wanted to see the entire world. Which was fine until Nova picked up a dog virus in Kyrenia and almost died. We rushed her to a vet in Nicosia, and she’s survived. But her vet bill is extortionate, and both she and I need a good rest, so we’re staying here until we recover – financially and physically!”

While in Cyprus, Alex will be riding his tall bike around the island, enjoying nature and taking trips up into the hills and down to the coast whenever possible. He’s also hoping to pick up a bit of work to rebuild the finances – “enough for the visas needed for the next few countries on my trip.”

When he sets off once more (Nova riding happily and healthily in his bike trailer) the plan is to “either head back to Turkey and on to Georgia, through the Stans and into south-east Asia, or to go through Iran, Pakistan, India and China. And then,” he grins, “it’s on to Australia and the Americas. As long as Nova and I can keep going, we will!”

A passion for travel, culture and a love of meeting others drives this young man onward; at 19, Alex has seen more of the real world than most of us ever will. “The soaring peaks of Switzerland, dark forests in Germany, tiny villages in Bulgaria, dusty plains in Anatolia – there’s a whole world out there,” he grins. “Every country I’ve visited has wonderful attributes: the views in Switzerland were incredible; the food in Hungary outstanding. And the people of Macedonia were the most welcoming I’ve ever encountered: I was offered a bed every night; strangers fed me and put me up!”

Just 10 days into his stay in Cyprus, Alex has yet to determine how he feels about the island. But he’s certainly looking forward to learning more of the nation’s history and culture as he rides from coast to coast. “It’s a small island, so I’ll probably become a fairly familiar sight over the next few months,” he laughs. “If you see me, give me a wave or stop for a chat: Nova and I would love to meet you!”

For more information on Alex’s journey, visit the Instagram accounts @tallbiketour or @Novabybike