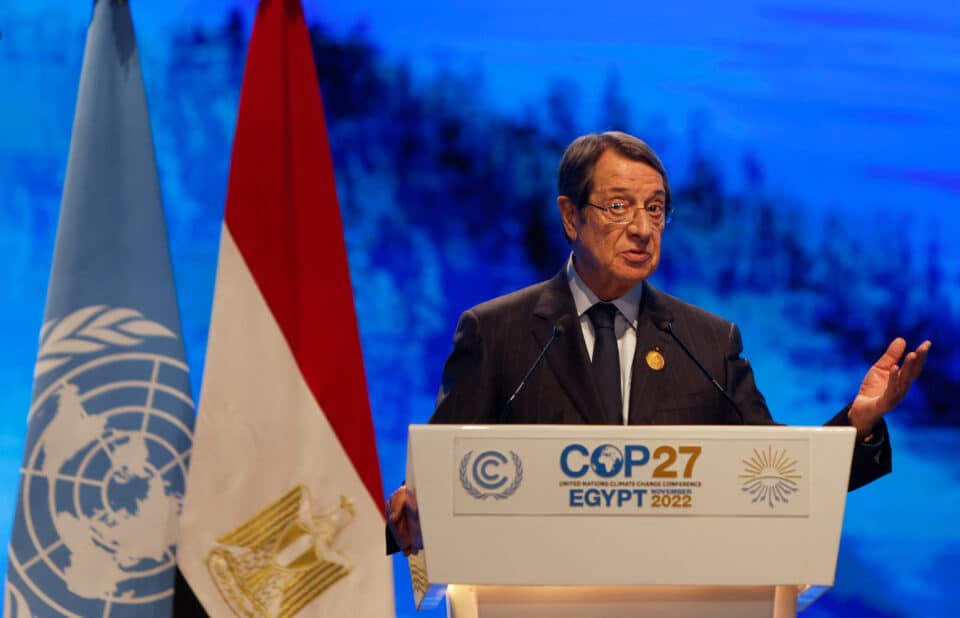 With Cyprus feeling the impact of climate change including prolonged periods of drought and increased temperatures, the country is fully prepared to implement an action plan to combat these problems, President Nicos Anastasiades said on Tuesday.

Speaking at United Nations climate change conference COP27 in Sharm-el-Sheikh, Egypt, Anastasiades pledged Cyprus’ commitment to reduce carbon emissions. He also reassured the youth their voice was being heard and this is being translated into concrete action.

“Notwithstanding the size of our country and our small carbon footprint, we are committed to contributing to carbon emissions reduction.

“Young people’s voices have been instrumental in galvanising action for a more ambitious climate agenda. We are hearing these voices, this clear message demanding action to be able to look to the future with optimism. Let us respond, let us all walk the road towards climate neutrality, towards a future of green, sustainable, resilient economies and societies.”

On the sidelines of COP27, Anastasiades also held an event for Cyprus’ Climate Change Initiative in the Eastern Mediterranean and Middle East with Egyptian President Abdel Fatah al Sisi.

Following an urgent call by the scientific community, Cyprus recognised the need to immediately act and effectively address, or mitigate to the extent possible, the catastrophic phenomena, he added.

As a result, Nicosia is fully prepared to implement the action plan, which will enable new green employment opportunities, access to climate change financial instruments and mechanisms and incentives to businesses and industries to adapt and shift to sustainable and green technologies to increase their competitiveness in the global markets.

Furthermore, the action plan will establish the necessary mechanisms for more resilient and competitive economies by switching to renewable and cleaner energy, adapting to some of the unavoidable climate change impacts and reducing greenhouse gas emissions as well as the carbon footprint.

“A historic milestone, which fits perfectly in our collective vision, which is none other than to look to the future with optimism and to use common challenges as an opportunity to proudly demonstrate what our countries can achieve when they join forces by cooperating and acting together.”

Sisi said the initiative is a major global mechanism when it comes to actions to deal with the impact of climate change. He noted the importance of such initiatives, pointing out that the scientific component this initiative includes is indispensable.