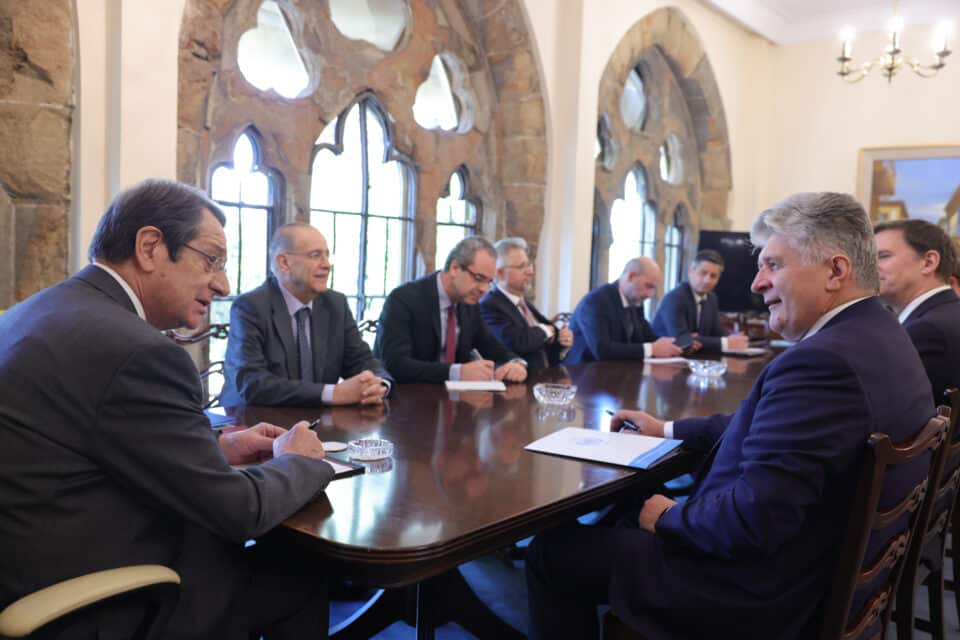 The UN Secretary-General Antonio Guterres will remain committed to being involved in the process of finding common ground to restart Cyprus talks, UN Assistant Secretary-General for Europe, Central Asia and Americas Miroslav Jenca said on Thursday.

Following a meeting with President Nicos Anastasiades, Jenca said that he and Anastasiades had a very frank and constructive discussion in the presence of the foreign minister, and other representatives.

“We have had a very frank, very constructive discussion with his excellency Mr Anastasiades, the foreign minister, and the delegation,” he said.

He added that the UN Secretary-General remains involved in the process of finding common ground and understanding to proceed with the issue of a solution that will benefit all the people of the island.

“I just would like to underline the commitment of the Secretary-General to stay engaged in the process searching for common ground and finding understanding to move forward the issue of settlement for the benefit and prosperity of the people of the island. So, we will continue in this good spirit,” he told the press.

Speaking after the meeting, Foreign Minister Ioannis Kasoulides said: “You realise the climate we live in here in Cyprus at the moment with repeated challenges by occupation forces, challenges in the buffer zone, challenges that are gaining recognition in the Organisation of Turkic States or elsewhere and with their demand for a SOFA (status of forces) agreement as a separate entity.”

He added that Cyprus has moved “heaven and earth” and Turkey will not accomplish its goals for the breakaway regime.

Commenting further on all the Turkish propaganda for upgrading the ‘TRNC’, Kasoulides said that they have not achieved any goal.

“The Cypriot media need to choose who they believe, us or the Turkish propaganda?” he questioned.

Kasoulides added that the president also mentioned to Jenca the issues in the buffer zone over the past few weeks, where farmers have been harassed by Turkish forces and works began on the Cetinkaya stadium in the area.

Commenting on whether another UN official will visit Cyprus before the presidential elections, he said that there probably will not be a visit if there is no mobility on the Cyprus issue.

It was announced in September that UN official Rosemary DiCarlo would visit Cyprus in the autumn to assess prospects for talks. However, over the course of the past few months, the government was informed that Jenca would be coming instead, as he had also come in July. Both officials hold equal standing on the UN hierarchy.

Kasoulides said that he would also be meeting with Unficyp head Colin Stewart, after Stewart meets with the people responsible for the Cyprus issue.

When asked if he is worried about any negative developments until the elections, the minister said: “Of course. You remember I spoke publicly about the dangers for Famagusta. I spoke publicly about the risks of interventions in the EEZ of Cyprus with drilling by Turkey. I didn’t do it to scare the Cypriots. I did it so that we could mobilise proactively. If they [Turkey] do everything after that, what does it matter anymore? And indeed at this moment we do not foresee any actions in the short term. Maybe we’ll see later.”

After meeting with Tatar, Jenca said: “I would also like to underline that during the meeting, I expressed our full commitment to continuing the dialogue. There is a prospect for a settlement for the benefit and development of the island’s inhabitants.”

On Wednesday, CNA reported that nothing specific is expected to develop from Jenca’s meetings at this moment, but the visit is still important as it sends the message the UN secretary-general continues to make contacts on the Cyprus problem and that he is sending a high-level official to talk to both sides.

The message is also to overcome the impasse based on UN framework.

Also, CNA’s information said that the main objective is to continue the discussion and engagement with the parties as part of the UN secretary-general’s effort to help create the right climate so that this very sensitive period can be overcome and a point can be reached, where the issue of restarting the talks process can be considered.