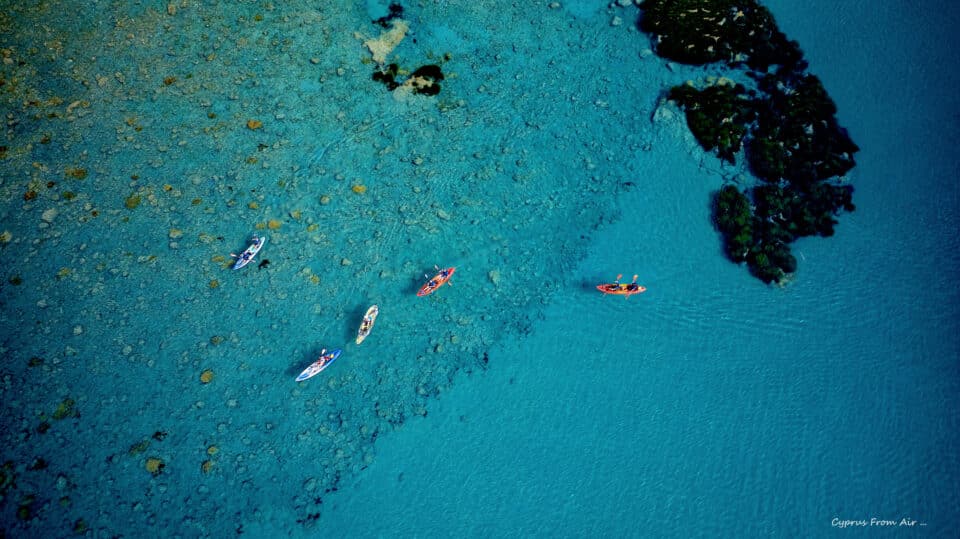 A pioneer of drone photography has captured some unique images of the island. Alix Norman takes a look

Manos Manoli sees Cyprus like nobody else. From soaring city skylines to the high, hidden reaches of the Troodos mountains, his perspective is unique. Fortunately, it’s a perspective he loves to share…

He is an aerial photographer, a pioneer of drone photography on the island. He’s known worldwide for his stunning views of Cyprus from above: its cities and villages, its sea, its secret vales and snow-capped peaks. He’s even been known to take his drones down into the depths of the earth – as a keen spelunker, he’s documented and filmed in many a hidden cave.

“I’m in the shipping industry by profession,” says the Limassol-based 50-year-old. “But my two great loves are Cyprus and its environment. My mother is a painter and my father a keen outdoorsman – I reckon I have them to thank my sense of the aesthetic and a passion for nature!”

While genetics may play a part, Manos’ stunning footage and images are a talent all his own: indicative of a man who has always enjoyed seeing the world “from a completely different angle. Long before drone photography existed, I would spend most of my weekends exploring the island with my camera, finding unusual views and viewpoints. I completed rock climbing courses so I could get up high – take pictures of things nobody else could see so I could share them with friends and on Facebook.”

By 2012, Manos already had a following on his social media pages: people who loved his novel take on the island’s beauty. “Honestly, I would have been a terrible wedding photographer!” he laughs. “I’ve always loved seeing things from a different angle, whether that’s exploring caves deep under the earth, climbing to the top of mountains, taking undersea pictures, or using my sea dome to capture photos that are half in, half out of the water. I love images that really stick in your mind, photos that inspire emotion in the viewer. And for me, that’s all about seeing an unusual composition from a unique perspective.”

But in 2013, when he purchased one of the first drones in Cyprus he was able to further widen his perspective. “I ordered a DJI Fandom 1 online from the United States; probably one of the very first drones ever to come to Cyprus,” he reveals. “At that time, drones came without cameras, so I had to attach my own GoPro. Neither did they come with high-tech software or stabilisation – so flying could be a risky business!”

Technical challenges aside, Manos “fell instantly in love with this means of photography. Taking pictures from 60 metres off the ground – it was an entirely novel concept! And though it was quite stressful to have €1,000 in the sky above me, it was incredibly freeing to be able to explore Cyprus from this new angle.

“I remember my first flight like it was yesterday,” he adds. “I chose Limassol pier for its safe take-off and landing spots, and lack of people. But within 30 minutes, I’d attracted hordes of children, crowds of adults, and two patrol cars. Apparently, hundreds of callers had convinced the police that the first alien invasion of Cyprus was underway!”

Today, a decade on, drones are a familiar sight in Cyprus. Manos often takes his drones (now totalling seven, and ranging from the light to long-distance models) along when he and the ‘Cyprus From Air’ team accompany guests on hikes into the hinterland. He also runs a sideline in commercial aerial photography, and mentors many a young drone pilot. But his first love will always be sharing his own unique angle on Cyprus with others…

“Many of my photos and much of my footage are available on Facebook,” he explains. “So it can be freely used by anyone – schools, universities, media companies, individuals – as long as it’s for a non-commercial purpose, and my photo credit is included. The whole reason I do what I do is to celebrate Cyprus, and to reveal a unique angle on the island’s beauty. That’s something I feel should be shared with everyone.”

Nowadays, Cyprus boasts a burgeoning community of drone pilots and aerial photographers. “But I do think it’s crucial to know what you’re doing before you buy,” says Manos. “Drone pilots must adhere to the European Union Aviation Safety Agency rules. It’s also highly recommended that anyone who intends to fly a drone take the Cyprus Aviation Authority’s online training course, and attain an A1/A3 licence.”

For those who’d like to take things a step further – like Manos himself – there’s the A2 licence, which requires classes, an in-depth knowledge of the regulations, a detailed understanding of meteorology, and the ability to carry out thorough risk assessments…

“Obviously you shouldn’t fly near hospitals, prisons, police stations, military bases, or airports,” Manos explains. “But you also need to be able to assess your take-off and landing sites: are there trees, power lines, crowds? Could the weather change? And, most importantly, will you be negatively impacting the environment in any way?”

With his deep love of Cyprus, Manos is passionate that everyone – drone pilot or not – cares for the unique beauty of the island. Any aerial footage he takes of local wildlife is always carefully assessed in advance, and usually requires a long-range lens “so that you are disturbing nothing, harming nothing. Drone piloting involves a lot of multi-tasking,” he notes. “Long before you choose your subject and take your picture, you need to plan your flying time, allow for obstacles, and start thinking in three dimensions rather than the usual two.

“But it is,” he adds, “absolutely worth it. As long as you’re safe and trained, then aerial photography is a wonderful hobby. You will see,” he concludes, “things you’ve never imagined. You’ll experience Cyprus as never before. And you’ll enjoy an entirely unique perspective of this beautiful island. There’s nothing like it!”

For more information, visit the Facebook page ‘Cyprus from Air’

‘Pumpkin spice and everything nice’