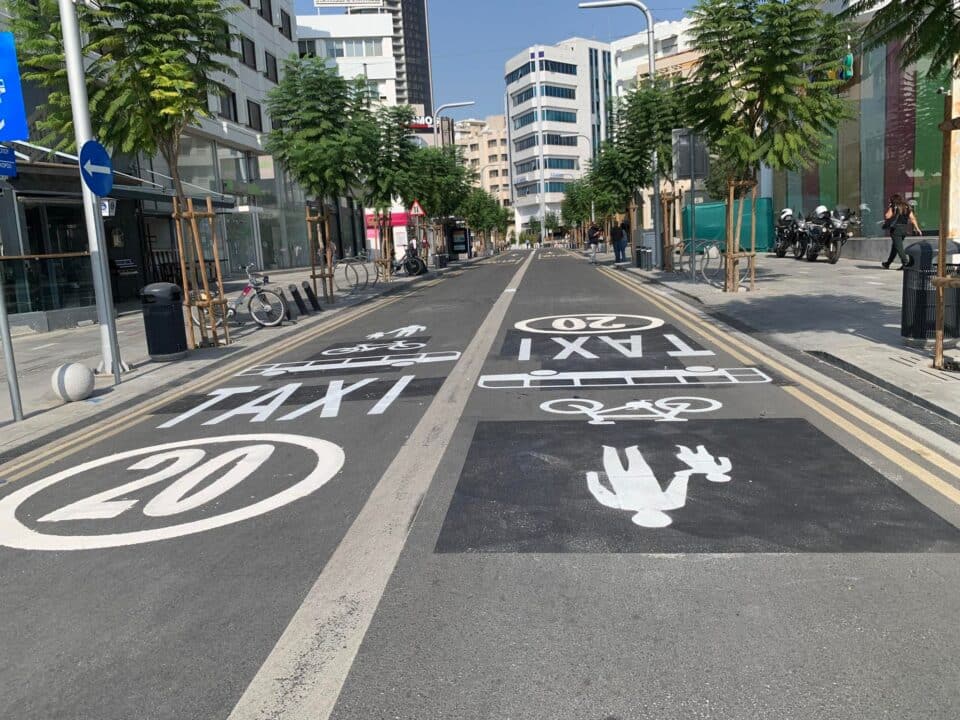 Makarios avenue in Nicosia is now banned for cars

We are used to businesses whining in Cyprus. Sometimes it’s justified and sometimes it’s not, but overall, there is often a mentality that we should not ever sympathise with them.

Not all enterprises are part of ‘big business’. Someone might be supporting their whole family from a small specialised shop, which was a point made by businesses along the upper part of Makarios avenue during a recent discussion at the House over road changes affecting their custom.

What was most striking was the response of the bureaucrats from the transport ministry who shut them down, responding that the one-way system implemented on that section of the avenue was a commitment made to the European Union, which financed the ‘sustainable mobility’ project. Additionally, every three months Cypriot authorities must report to the EU carbon dioxide measurements taken in the area.

It’s fantastic to have emissions-free areas within the city centre that people can choose to visit and enjoy, shop and have a coffee. Who would want to return to the car-choked Ledra street or the old version of lower Makarios avenue where people inhaled car fumes along with the aroma of their overpriced lattes?

There is something called the 15-minute city proposal currently underway as part of the EU’s green policies that aims to transform all urban areas in this way, but unlike just creating an-emissions-free city centre for instance, it’s shaping up to be a whole other ballgame because it is being designed to encompass every area.

The goal looks great on paper until it suddenly becomes eerily similar to Covid lockdowns. Indeed, referring to Covid, an EU report on the proposal literally cites the pandemic as an example of how confining people to their neighbourhoods as much as possible can work for the environment. “Our society has proven capable to adopt our way of living at very short time following the imperatives of the crisis.  This suggests that radical required changes in decision-making and behaviour are possible,” it says.

The proposal for the 15-minute city, thought up by academia and now part of the ‘smart city’ concept, proposes that people stay in their neighbourhoods and access services that are within a 15-minute walk or bike ride. Everything outside of that would need to be accessed through public transport while car usage would be limited on pain of penalty.

This is all very well if every neighbourhood in a city contained everything a person needed at any given time, possibly like New York perhaps, but there are areas in Nicosia where even the nearest kiosk is a good 30 minutes’ walk, not to mention supermarkets. Neighbourhood ‘bakalis’ in Cyprus have all but disappeared.

To implement the 15-minute city successfully there would also need to be rules and penalties and smart-city technology including sensors because otherwise people would obviously ignore their imposed car limits. A debate is underway in Oxford in the UK at the moment where city leaders plan to divide it into these 15-minute zones. The proposal, up for discussion this month, includes a penalty of 70 pounds on anyone who takes their car outside of their zone more than 100 days a year. And there’s the rub.

Irrespective of work obligations, the weather, visiting friends or relatives across town, attending an event, taking into account people’s ages or differing physical abilities, a dearth of services or shops, needing to drive to A&E, it doesn’t matter. Take the bus or walk. Take the car but don’t exceed the annual or monthly journey allowance outside the neighbourhood or face a fine. Sound familiar?

Despite Brexit, the UK, along with Cyprus and most other EU states, have signed up for this. There is a similar plan for London. But London is London where most neighbourhoods have what people need within that 15-minute limit plus a number of choices of public transport.  Cities in Cyprus… well they’re in Cyprus where public transport has to date been a lost cause. And despite this, the agenda to limit people’s only other form of transport is going ahead anyway.

The businesses that complained to MPs at the recent House discussion were told in no uncertain terms there was a “new pan-European order of things now” and that “the privileges enjoyed by private cars must end”, no acknowledgement at all to the fact that car use is sometimes a privilege and sometimes it really is a necessity. And I speak as someone who does not own a car.

It’s not that less car usage is undesirable or that people don’t need to walk more or cycle more. They do need to, and they often could. But without a change in mentality, and alterative transport that is so good people actually choose to use it – which we are still years away from if ever – people are instead going to be force-fed on pain of penalty for driving ‘too much’, even out of necessity.

It will be interesting to see how transport ministry and other public officials like those who unceremoniously shut down the concerns of business owners, react when the time comes when they will not be allowed to drive up to the front doors of their offices because they too will be located in an emissions-free zone.

Tales from the Coffeeshop: Hippy message of love from church frontrunner

An uncaring government propped up by weak institutions