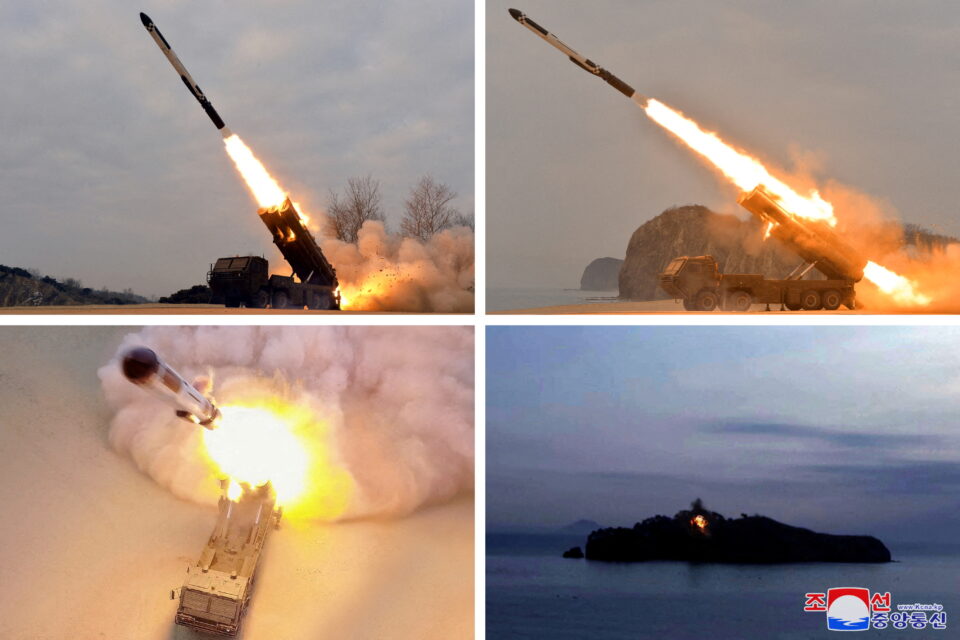 A combination image shows a missile test that state media KCNA says was conducted this week at undisclosed locations in North Korea (KCNA).

The U.S. ambassador to the United Nations, Linda Thomas-Greenfield said it was vital the 15-member Security Council respond with one voice and reiterated U.S. charges that China and Russia were “emboldening” Pyongyang by blocking council action.

“We will offer another opportunity for the Council to hold the DPRK accountable for its dangerous rhetoric and its destabilizing actions. The United States will be proposing a Presidential Statement to this end,” she said, referring to North Korea by the initials of its official name, the Democratic People’s Republic of Korea.

China’s U.N. Ambassador Zhang Jun said China was “concerned” by the “upward spiral of rising tension and intensifying confrontation” on the Korean peninsula, but said the Council should help ease tensions and not always condemn or pressure Pyongyang.

He said Washington should take the initiative and put forward realistic proposals to respond to North Korea’s “legitimate concerns.”

“All parties should remain calm, exercise restraint, act and speak with caution, and avoid any actions that may escalate tensions and lead to miscalculation, so as to prevent the situation from falling into a vicious cycle,” Zhang said.

Russia’s deputy U.N. Ambassador Anna Evstigneeva accused Washington of trying to force North Korea into unilateral disarmament though sanctions and force, and blamed the missile tests on military drills by the United States and its allies.

A spokesperson for the U.S. mission to the United Nations said a draft president’s statement would be shared with the Security Council soon and negotiations would follow.

After the meeting, Thomas-Greenfield read out a joint statement by 14 countries, including eight Security Council members, condemning North Korea’s latest launch, as well as a subsequent North Korean state media report saying the missile could be used for a preemptive nuclear strike.

The statement said the missile landed about 120 miles (200 km) from Japan’s coastline and the test was “a serious escalation” that “poses an unequivocal threat to international peace and security.”

It said the Council must act to limit the advancement of North Korea’s weapons programs.

North Korea has conducted an unprecedented number of ballistic missile launches this year and Washington has warned for months that Pyongyang could conduct its first nuclear bomb test since 2017 at any time.

A senior U.S. official said this month that Washington believes China and Russia have leverage to persuade North Korea not to resume nuclear testing and U.S. President Joe Biden told his Chinese counterpart last week Beijing has an obligation to try.

North Korea’s foreign minister on Monday accused U.N. Secretary General Antonio Guterres of siding with Washington and failing to maintain impartiality and objectivity, saying it was Pyongyang’s right to develop weapons for self defense.