The House recently decided to extend the period during which foreclosures will be suspended until the end of next January for non-performing loans secured by a person’s main residence worth up to €350,000.

The decision also affects loans related to commercial housing with a turnover of up to €750,000 and plots of land worth up to €100,000. 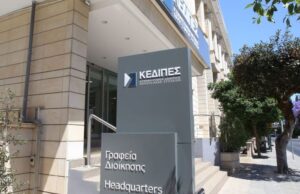 “Due to these frequent interventions, cash inflows will be reduced and the ability to fully repay the state aid will be negatively affected,” Papadopoulos said at a press conference on the company’s results for the third quarter of 2022.

In response to questions, the Kedipes chairman said that if the moratorium only applied to a person’s first and primary home, it would be more manageable, since there are no foreclosures affecting such residences, whereas now the moratorium has more of a multiplier effect due to the inclusion of plots of land and commercial housing.

“For us, foreclosures are a tool, not an end in itself, but starting the foreclosure process we very often find consensual solutions, especially when we talk about strategic defaulters,” he said.

The decrease on a quarterly basis has been primarily attributed to seasonal factors combined with a contribution of €12.3 million from the divestment of Kedipes’ holdings in commercial cooperative companies.

As Papadopoulos mentioned, the results are consistent with the business plan of Kedipes, while the next aid repayment to the state will be made within the fourth quarter and will range between €60 and €80 million.

What is more, the cumulative cash inflows since the start of Kedipes’ operations on September 1, 2018, amounted to €1.55 billion, while the income generated from the management of loans and real estate reached €1.48 billion.

The assets of KEDIPES at the end of the third quarter of 2022 stood at €6.96 billion in nominal value and included €121 million in cash, €582 million in real estate and €631 million in servicing loans.

At the same time, third quarter 2022 operating and asset management expenses amounted to €25 million, down by 6.9 per cent quarter-on-quarter and down 2 per cent when compared to the corresponding quarter of the previous year.

Ukraine promises shelters for its people as winter sets in