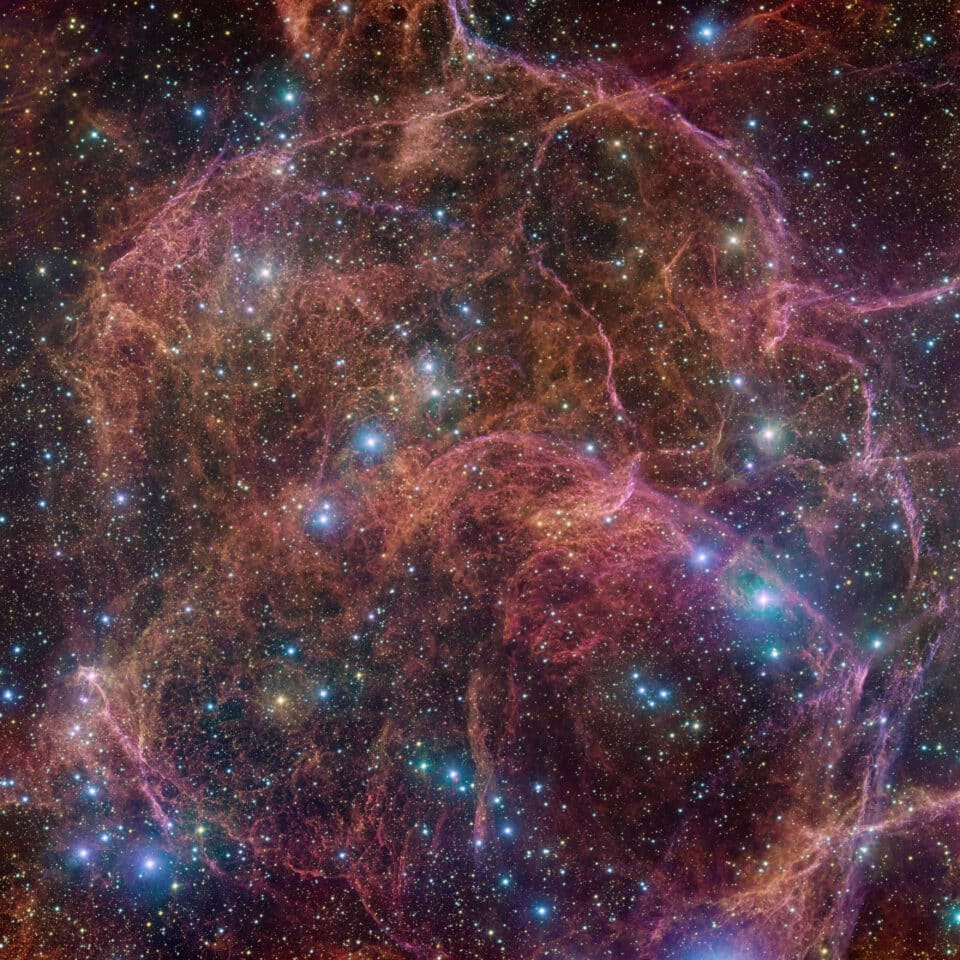 An undated image shows a view of the orange and pink clouds that make up what remains after the explosive death of a massive star - the Vela supernova remnant. This image consists of 554 million pixels and is a combined mosaic image of observations taken with the 268-million-pixel OmegaCAM camera at the VLT Survey Telescope, hosted at ESO’s Paranal Observatory. OmegaCAM can take images through several filters that each let the telescope see the light emitted in a distinct color. To capture this image, four filters have been used, represented here by a combination of magenta, blue, green and red. The result is an extremely detailed and stunning view of both the gaseous filaments in the remnant and the foreground bright blue stars that add sparkle to the image. ESO/VPHAS+ team/Cambridge Astronomical Survey Unit/Handout via REUTERS NO RESALES. NO ARCHIVES. MANDATORY CREDIT. THIS IMAGE HAS BEEN SUPPLIED BY A THIRD PARTY.

Most galaxies are built around humongous black holes. While many of these are comparatively docile, like the one at our Milky Way’s center, some are fierce – guzzling surrounding material and unleashing huge and blazingly bright jets of high-energy particles far into space.

The researchers studied an exotic object called a blazar at the center of a large elliptical galaxy named Markarian 501 located about 460 million light years away from Earth in the direction of the constellation Hercules. A light year is the distance light travels in a year, 5.9 trillion miles (9.5 trillion km).

Blazars are a subset of objects called quasars that are powered by supermassive black holes feeding on gas and other material at the center of galaxies and sending two jets of particles in opposite directions into space. Blazars are oriented such that one of their two jets from our vantage point on Earth is heading directly at us.

“Blazars are the most persistently bright objects in the observable universe. They are the most energetic. They have the biggest, scariest black holes. Everything that happens around them is so fascinating,” said astronomer Yannis Liodakis of the Finnish Centre for Astronomy with ESO, lead author of the research published in the journal Nature.

Scientists have long sought to understand how the jets launched from blazars become so luminous and the behavior of the particles in them. The jets from this blazar extend to a distance of about a million light years.

IXPE, launched last December as a collaboration between the U.S. space agency NASA and the Italian Space Agency, measures the brightness and polarization – a property of light involving the orientation of the electromagnetic waves – of X-ray light from cosmic sources. Different phenomena, like shock waves or turbulence, present polarization “signatures.”

The researchers found evidence that particles in the jet become energized when hit with a shock wave propagating outward inside the stream and emit X-rays as they accelerate. A shock wave is produced when something moves faster than the speed of sound through a medium like air – as a supersonic jet does as it flies through Earth’s atmosphere – or a region with particles and magnetic fields called a plasma, as in this case.

“The light that we see from the jets comes from electrons,” said Boston University astrophysicist and study co-author Alan Marscher. “X-rays of the type that we observe in Markarian 501 can only come from extremely high-energy electrons.”

“However, before we can use them as such, we need to understand all the physical processes that take place. For many years we would observe high-energy light from those sources and had a few theories how the particles that emit that light would be energized. The X-ray polarization capabilities of IXPE allowed us for the first time to directly test our theories,” Liodakis said.