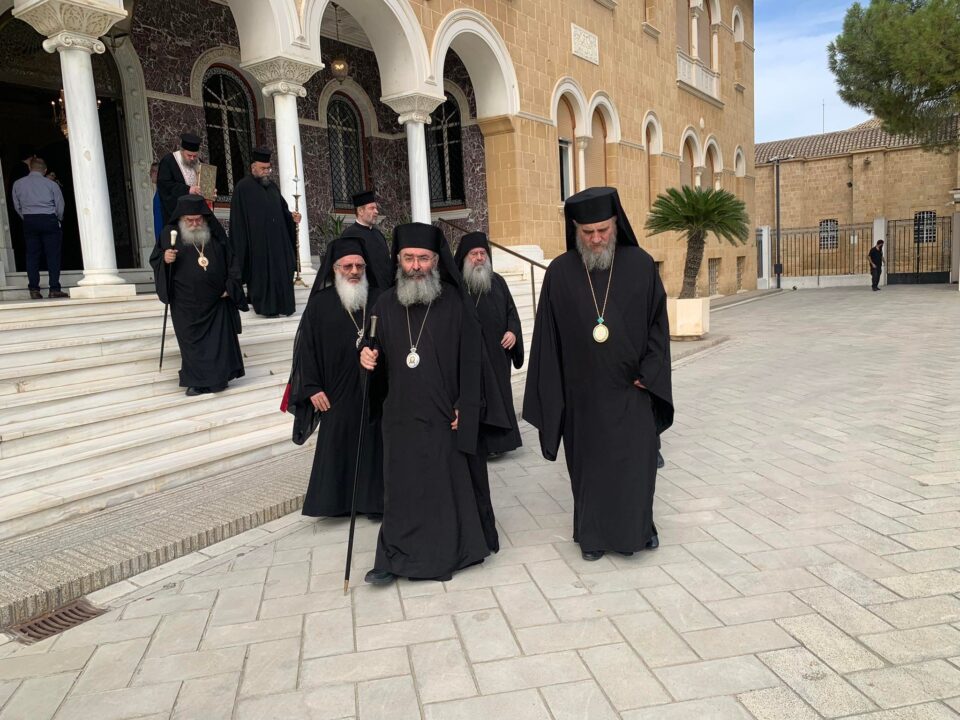 Members of the Holy Synod at the Archbishopric (Photo: Christos Theodorides)

Elections for the next archbishop are drawing closer, and the scenery is continuing evolving, with some candidates gaining growing support and others reportedly thinking of withdrawing from the race.

Reports surfaced on Thursday that Kyrenia Bishop Chrysostomos might withdraw his candidacy, despite being one of the six main candidates.

According to daily Politis’ information, there could be one withdrawal from the race by election day on December 18, and most likely it will be Chrysostomos, who according to polling seems to be a non-starter.

Meanwhile, the bishops have been taking to appearing on the TV programmes, and some have even gained support from youth groups, over the past few days.

Most recently, Constantia-Famagusta’s Vasilios had gained the support of 250 young people aged 18-40, an announcement from the bishop’s metropolis said on Thursday.

“He welcomed the more than 250 young people who support his candidacy with a smile and love,” the announcement said.

In Limassol, after launching their website, the friends and supporters of their bishop, Athanasios, launched an Instagram account, which has pictures and quotes from his sermons.

Tamassos and Limassol seem to be getting all the limelight, having the most appearances in the media and on social media.

This may be due to the greater financial strength of their metropolis’ in comparison with the other bishops.

Tamassos Isaias was also most recently endorsed by the Kykkos Bishop Nikiforos, who said they would work to get his “spiritual child” elected.

“At the young age of 18, he came here, I received him, educated him, made him a bishop and I will be very happy to see him as an archbishop,” he said.

Nikiforos added that all the all the polls place Isaias high, and that as an archbishop he would combine the spiritual aspect with the communal aspect of the role.

The archbishop needs to have both, according to Nikiforos, as the spiritual aspect is not enough.

Four dead in shooting at shopping centre in southern Russia

Suspended doctors to go back to work at Makarios hospital