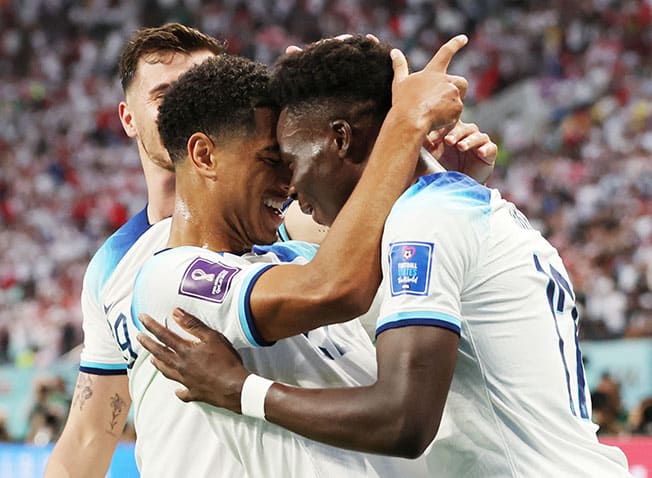 If you’re good enough, you’re old enough, so the saying goes, and the young guns of England and the United States added credence to that theory with eye-catching performances in their opening games at the World Cup this week.

On Friday the two nations meet in Al Khor where England’s Jude Bellingham and Bukayo Saka will try to match the levels they reached in a 6-2 victory over Iran which put Gareth Southgate’s side in command of Group B.

England have yet to beat the United States in World Cup meetings, suffering an unthinkable loss in 1950 that was regarded at the time as a national humiliation and playing out a 1-1 draw in South Africa in 2010.

But they will be oozing confidence after an emphatic return to form in their opening rout of Iran after a six-match winless streak, a game in which 19-year-old midfielder Bellingham scored the opener and 21-year-old Saka struck twice.

It was exactly the start England needed and the way they went about their business, with Bellingham at the heart of everything, was a breath of fresh air for fans who had begun to question whether Southgate was the man for the job.

Despite the soaring confidence England will be extremely mindful of Gregg Berhalter’s callow American squad who, with an average age of 25, are the second youngest of the 32 nations assembled in Qatar after Ghana.

Timothy Weah scored a goal his illustrious father George would have been proud of to give the U.S. the lead over Wales, while fellow 22-year-old Sergino Dest and 19-year-old Yunus Musah also impressed on their World Cup bows.

Having not qualified in 2018, Berhalter, like Southgate, has put his faith in youth and is being rewarded, even if there was a sense of disappointment that a team which began with 11 World Cup debutants against Wales could not see out the victory.

Some of his players looked fatigued by the end but asked if he needed to lift his players, Berhalter said: “We get to play one of the teams we think are one of the favourites for the tournament and I don’t think there’s going to be many tired players come Friday.”

Southgate said he did not enjoy the latter stages of England’s thrashing of Iran, annoyed that his side had switched off and conceded a couple of goals.

But England have arguably been the most impressive team so far in the early days of the tournament, with Southgate loosening the shackles and letting his side run free against Iran with five players on the scoresheet.

An athletic United States will be a far harder nut to crack though with several of their players seasoned Premier League performers such as Chelsea forward Christian Pulisic and Leeds United youngster Brenden Aaronson.

“We need to be better than we were (versus Iran) against the USA because they will be coming for us full throttle. We will have to reset,” Southgate said.

England, who have won eight of their 11 meetings with the United States yet never in a competitive game, have a slight worry over captain Harry Kane’s ankle but could have defender Kyle Walker back in contention on Friday, although midfielder James Maddison is still troubled by a knee injury.

Limassol stadium to be officially opened