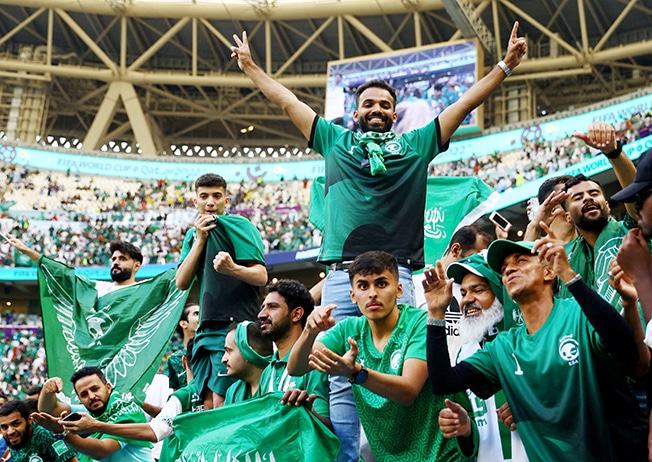 Victories against the odds by Arab teams competing at the Middle East’s first World Cup have inspired their supporters, bringing a rare sense of optimism and unity for fans from the Gulf to the Atlantic Ocean.

Saudi Arabia delivered the early shock of the tournament, defeating two-time champions Argentina, and Morocco then overcame second-ranked team Belgium – roared on by the vast majority of fans at both matches in the Gulf state of Qatar.

With one match each left to play in their groups, both teams remain in strong contention to reach the knockout stage of the competition, the first time two Arab countries would have reached that far.

That chance to make history has forged a sense of solidarity among Arab supporters in Doha.

“Most of the congratulations…” he began “…were from Saudis!” said Saudi fan Faisal al-Ruwaili, draped in his country’s green flag and finishing Mansouri’s sentence for him.

“When Saudi Arabia play I am Saudi and when Morocco play, all the Arab people…” said Mansouri “…are Moroccans!” said Ruwaili, his arm around Mansouri’s shoulder.

Mansouri said it felt as if Morocco and Saudi Arabia were both playing on home ground in Qatar, something which may have helped them reach new heights.

“Saudi Arabia played the best match in the history of the Arab world,” he said, speaking in Doha’s Souq al-Waqif market, where fans mingled in shops and restaurants, keeping one eye out on televisions for updates on matches.

Although hosts Qatar lost their opening two matches and were the first to be eliminated, a fourth Arab side, Tunisia, could still advance if they overcome France in a final group match on Wednesday. While the odds may be against them, they will not be short of support at the nearly 45,000-capacity Education City stadium on the western edge of Doha.

“Soccer unites nations. All Arab and Gulf people support any (Arab) team,” said Saudi supporter Khaled al-Asaimi, echoing the tone set by the leaders of Qatar and Saudi Arabia at the start of the tournament.

Tensions between the two neigbours led Saudi Arabia and its allies to declare a travel and trade embargo on Qatar in 2017, a move only rescinded last year.

Morocco fan Kareem al-Azzi said the results had shown that Arabs “are one nation, and the World Cup fixes what politics damage. We are brothers.”