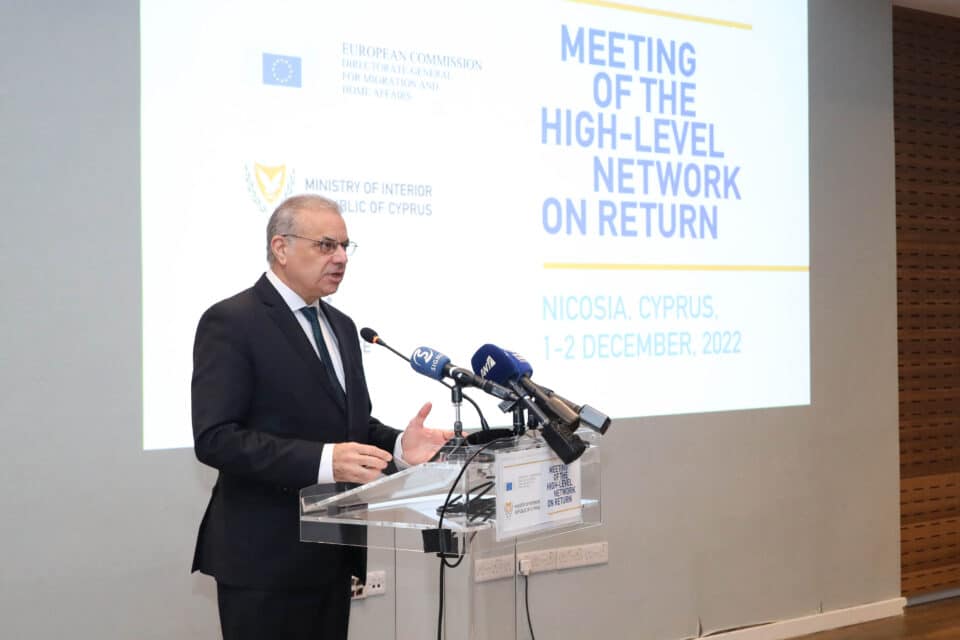 Nicos Nouris, addresses the second Meeting of the High-Level Network for Returns of the European Commission

Cyprus has repatriated close to 7,000 migrants during 2022 and is a model within the EU for such returns, according to Interior Minister Nicos Nouris.

According to figures from the European Border and Coast Guard Agency (Frontex), 20,748 returns were registered across Europe in the first 11 months of the year, a 40 per cent increase on 2021.

As of the end of November, Frontex was deploying 2,300 personnel, over 60 vessels and more than 270 patrol cars at Europe’s external borders. In Cyprus there were 25 Frontex personnel deployed in Cyprus plus 15 Returns Officers.

Nouris has long campaigned for boosting repatriations amid frustrations over many declined asylum seekers remaining in Cyprus. In July, he said that 2,770 had been returned as of that time during 2022.

His upbeat comments on Thursday were made during a presentation at the High-Level Network on Returns in Nicosia – attended by representatives from EU member states, Frontex and Europol.

The interior minister said that the goal is close coordination between member states in order to ensure an effective system of returns across the EU.

Costas Constantinou, permanent secretary at the interior ministry, told MPs that by the end of October, some 17,000 people had crossed into the territory controlled by the Republic – almost double the number recorded in 2021. Meantime the number of unaccompanied minors has tripled.

The heightened focus on repatriations comes amid a seeming lack of effectiveness on the ground in reducing arrivals, despite a slew of measures enacted by the government.

In a bid to stem the flow the government enacted measures including the controversial placement of barbed wire across sections of the buffer zone and introducing sweeping new policies.

One is by the International Organisation for Migration (IOM) and the other by the Civil Registry and Migration Department.

But the IOM states that for the programmes to be successful it requires the cooperation of the migrants, civil society, governments in both the host and transit countries as well as the country of origin.

Meanwhile, it also emerged on Thursday that German Chancellor Olaf Scholz conveyed Germany’s solidarity with Cyprus to President Nicos Anastasiades, who, during their recent meeting in Berlin, expressed his country’s intention to receive 500 asylum seekers from Cyprus.

According to CNA, both men condemned the instrumentalisation of the refugees by directing the flow of irregular migrants towards Cyprus. Anastasiades, it added, stressed the need for the EU to take effective measures in order to prevent the instrumentalisation of immigration, both by Turkey and by any third country that exploits human suffering in an attempt to gain political benefit.