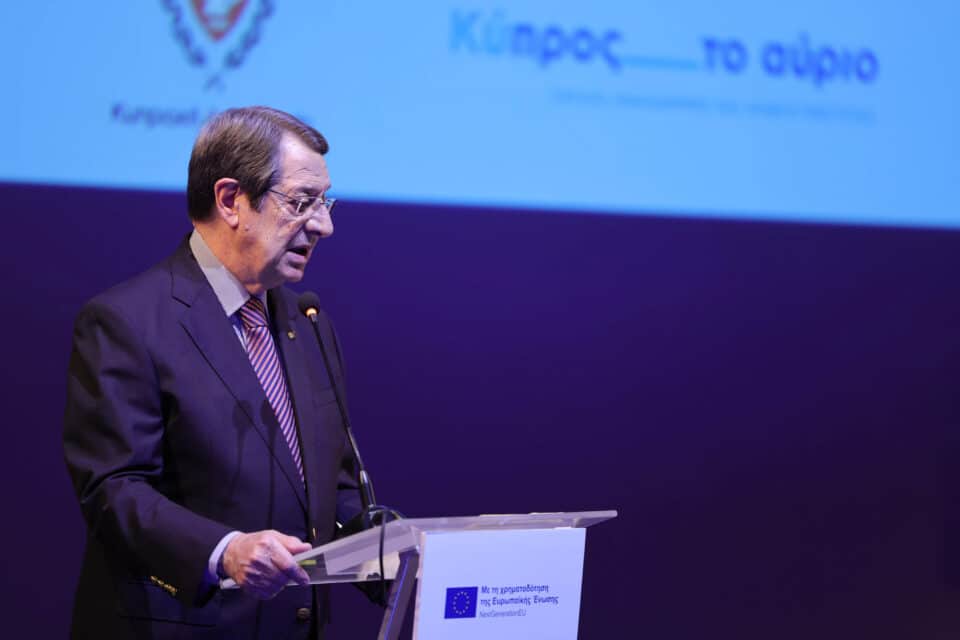 Cyprus will reap €4.4 billion from the ‘Cyprus Tomorrow’ plan, President Nicos Anastasiades said on Friday during the first event over the country’s Recovery and Resilience plan.

As part of the plan’s framework, the focus will lie on five main pillars: public health, a rapid transition to a green economy, boosting the resilience and competitiveness of the economy, digital transformation, employment and training. The funds come from the European Commission if Cyprus achieves certain reforms.

The plan includes a total of 133 measures, aiming to bring “the largest reform and development intervention since the establishment of the Republic of Cyprus.” The measures are broken down into 58 involving reforms and 75 addressing investments.

“Taking into account the funds for the Recovery and Resilience plan, the Cohesion Policy fun and additional private investments that will follow by implementing these projects, the economic impact of the ‘Cyprus – Tomorrow’ plan amounts to €4.4bn,” without taking into account the expenditure of annual budgets, Anastasiades said.

Beyond the projected GDP increase, there will also be a 7 per cent hike which is expected to create more than 11,000 “well-paying jobs”, the President added.

Despite the fact that the Covid-19 pandemic may have temporarily halted the country’s economic development, the government’s determination coupled with hard work from the public revealed that “we can transform a crisis into an opportunity.”

Anastasiades noted that the disbursement of funds to Cyprus was made possible after several milestones and targets were met, related to public service reform and improving the anti-corruption regulatory framework, as well as investments and sponsorship projects related to the green transition.

These include promoting energy efficiency and renewable energy investments in small and medium-sized enterprises, municipalities, communities, in the wider public sector, but also in residences while also confirming EU resources were optimally used.

Cyprus has successfully completed the first of the 10 payment requests, with Anastasiades thanking ministries and political parties “who showed responsibility and voted for the necessary reform proposals”, which are a prerequisite for the disbursement of the resources of the Recovery and Resilience Plan.

Currently, efforts are underway to compete the requirements for the second tranche of funds, amounting to €85m. It includes seven reforms and 11 investments, the majority of which have already been implemented or are on the way to being implemented, Anastasiades said.

“I have no doubt that with determination, planning and meticulousness as well as the cooperation between the executive and legislative powers, the timely implementation of these goals will be achieved.”