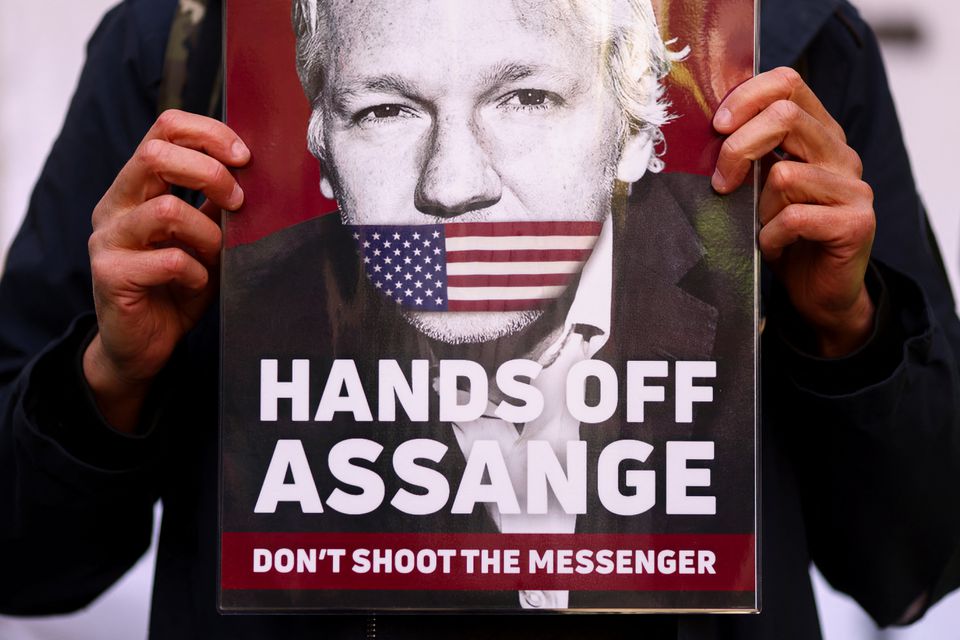 A supporter of Julian Assange displays a placard, outside the Westminster Magistrates' Court in London, Britain April 20, 2022. [REUTERS]

WikiLeaks’ founder Julian Assange, who is battling extradition from Britain to the United States where he is wanted on criminal charges, has submitted an appeal to the European Court of Human Rights (ECHR), the court confirmed on Friday.

Assange, 51, is wanted by US authorities on 18 counts, including one under a spying act, relating to WikiLeaks’ release of vast troves of confidential US military records and diplomatic cables which Washington said had put lives in danger.

Britain has given the go-ahead for his extradition, but he has launched an appeal at London’s High Court, with the first hearing expected early next year.

His legal team have also launched a case against Britain at the ECHR, which could potentially order the extradition to be blocked.

“We confirm that an application has been received,” a statement from the court said.

Assange’s brother Gabriel Shipton told Reuters earlier this week that he believed the US authorities would want to avoid the case going before the ECHR, as the European media and public were more sympathetic to his cause than those in Britain or the United States.

“I would imagine the US wants to avoid that… trying to extradite a publisher from Europe for publishing US war revelations when the US is asking Europe to make all sort of sacrifices for the war in Ukraine,” Shipton said.

In January 2021, a British judge ruled Australian-born Assange should not be extradited, saying his mental health meant he would be at risk of suicide if convicted and held in a maximum security prison.

But that decision was overturned after an appeal by US authorities who gave a package of assurances, including a pledge he could be transferred to Australia to serve any sentence.

The extradition was then ratified in June by the then British home secretary after the government said the courts had concluded it would not be unjust or an abuse of process, and that he would be treated appropriately.

WikiLeaks first came to prominence in 2010 when it released hundreds of thousands of secret classified files and diplomatic cables in what was the largest security breach of its kind in US military history.

US prosecutors and Western security officials regard Assange as a reckless enemy of the state whose actions imperilled the lives of agents named in the leaked material.

He spent seven years holed up in Ecuador’s embassy in London to avoid extradition to Sweden where he was wanted for questioning over a sexual assault investigation that was later dropped.

However, he was dragged out and jailed in 2019 for breaching bail conditions, and has been held in prison in London ever since while his extradition case is decided.

Assange’s supporters say he is an anti-establishment hero who has been victimised because he exposed US wrongdoing in conflicts in Afghanistan and Iraq, and that his prosecution is a politically motivated assault on journalism and free speech.

The case has gained prominence this week with major media outlets that had originally worked with the WikiLeaks founder over the leaked material writing an open letter to say his prosecution should end.

Meanwhile, Australian Prime Minister Anthony Albanese said he had raised the issue of Assange’s release with US officials, saying the matter should be brought to a close.