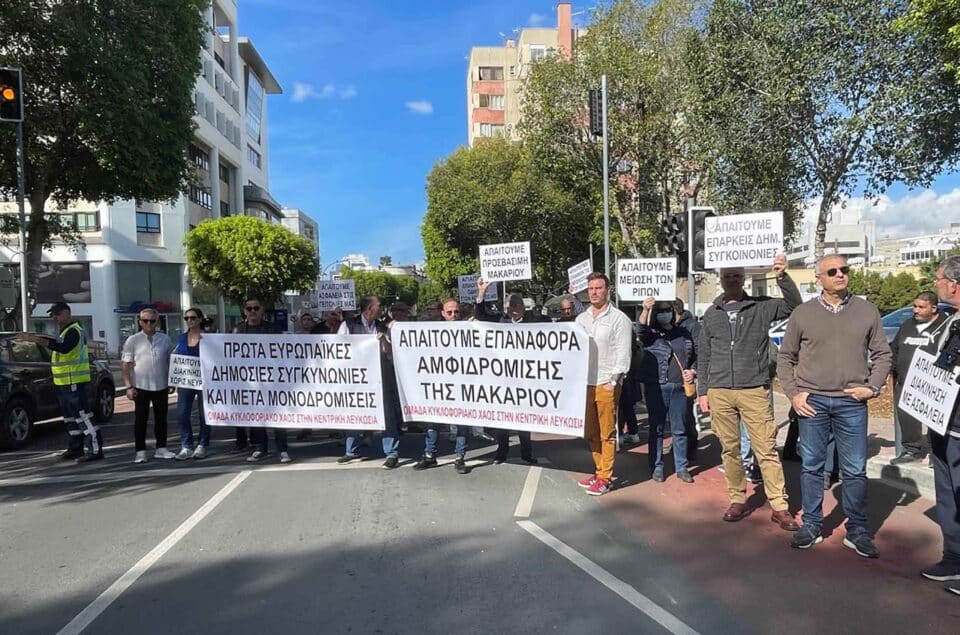 Demonstrators on Makarios Ave on Saturday

Shopkeepers on Makarios Avenue in Nicosia staged a protest on Saturday, calling for an accessible and sustainable shopping area.

Demonstrators blocked the road and held placards saying ‘We demand the reduction in pollution’, ‘First European standard public transport then one way roads,’.

Business owners have long argued that roadworks that went on for months and practically shut the street, which is now open but closed to private vehicles, have impacted the businesses, with many shops shutting down as a result of changes in the area’s traffic system.

The section of Makarios Avenue – from the Landmark Nicosia (formerly the Hilton hotel) to the traffic lights at the Lykavitos police station is open only to one-way traffic, while in late October the lower section of the avenue, where most of the shops are situated, opened as a “shared space” for pedestrians and authorised vehicles such as buses, taxis and delivery vehicles, in what the municipality hopes will lead to more environmentally-friendly use of the road.

Spokeswoman for the affected businesses Marilena Ieromonachou argued that since the changes, there have been road accidents on a daily basis. Additionally, a core component of the project is to boost public transport, but that has failed to materialise, she noted.

“The public has no alternative but to use their car, creating pollution,” and increasing traffic in the now congested area.

As a result, this is creating a nuisance to the public which is wasting its time on the roads and wasting money on petrol, she added. “We’ve been working on this road for 33.5 years and we’re trying to survive. This whole thing has created huge issues to our commercialisation. Our capital shouldn’t die.”

On Saturday, Nicosia municipality hit back at demonstrators saying that “in the past, when the avenue had three lanes with tens of thousands of cars driving past every day, many shops were closing one after the other.”

As it stands now, the area has its own identity based on modern designs of urban development, accessible to everyone and safe for pedestrians, the municipality said.

“A number of new shops have already started working and the majority – if not all – of commercial centres have been rented out or sold and will begin operations by summer 2023. This confirms that a number of investors believe in the project and the area’s potential,” it added.

The municipality said it is only a matter of time before citizens “embrace the project” just as they did when other areas changed usage, notably Stasikratous and Ermou.

“The Christmas period is a great chance to invite people to the centre so they can get to know the new commercial avenue in the capital and evaluate the potential it holds. To this effect, the municipality is organising a number of events,” it concluded.