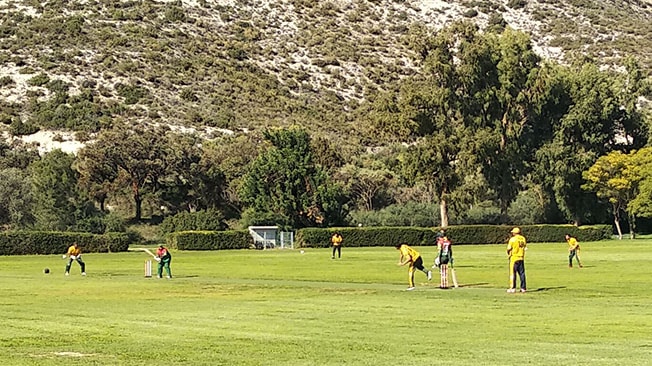 By Richard Boxall
The weekend’s matches in the Autumn 2022 CCA BAO Financial T20 Cup advanced three teams to the quarter final stage of the competition, while the remaining five places will not be decided until the last round of group matches next week.

Nicosia Tigers faced Limassol Moufflons in a crucial match in group D and restricted them to 144-7, a total boosted by Mehtab Ur Rehman’s 41 and a late flourish by Mansoor Nawaz. The Tigers knocked off the runs with some ease, thanks to Roman Mazumder’s 52, a steady knock by captain Shakhawat Hossain (30), and a violent finish by Iftekar Jaman (24 not out from 7 balls).

Sri Lanka Lions will join Nicosia Tigers in the quarter finals if they can beat them in their final game on Sunday; otherwise Limassol Moufflons will advance despite their defeat this week.

In group C Markhor have resurrected their chances by comfortably beating current group leaders Cyprus Moufflons, who turned in a below-par performance with bat and ball and in the field.

Muhammad Qamar Ali took 4-15 as Moufflons were restricted to 133-9, with Gurwinder Singh top-scoring on 43 not out. Raseb Sher got Markhor off to a good start with 51, and Abu Baqar Siddique (44 not out) played a steadying role in mid-innings before exploding into a flurry of sixes to complete the victory with 3 overs and 7 wickets to spare.

The top two placings will be decided when Cyprus Moufflons play Amdocs next week, with both of those teams and Markhor still in with a chance.

Two close encounters in group B resulted in crucial narrow wins for Punjab Lions and Bazigar.

The Lions were bowled out for 152, a low score at the Ypsonas ground, with Limassol Zalmi’s Faisal Khan taking 3-29. Zalmi set off well in reply, with openers Noman Zeb and Umar Shah putting on 54 in 5 overs. But the Lions worked their way back into the game, with Tejwinder Singh following his top score of 27 with 3 wickets for 22, while Harwinder Singh took 3-42.

The decisive bowling came from Taranjit Singh (3-30) who dismissed Noman for 45 and came back at the end to take the last two wickets, leaving Zalmi 11 runs short.

The 19th over, bowled by Babar Ayub, was dramatic. Jasdeep Singh struck 6, 4, 6 to bring his team close to an unlikely win, before being caught in the deep going for another boundary, leaving the Kings just 6 runs short as Bazigar claimed the quarter final spot.

There were no fixtures in group A, but next week’s game between Black Caps and Riyaan will decide which two out of them and Sri Lankans will progress in the competition. The closeness of all the groups has certainly added a level of excitement to the cricket as the knockout stage approaches.