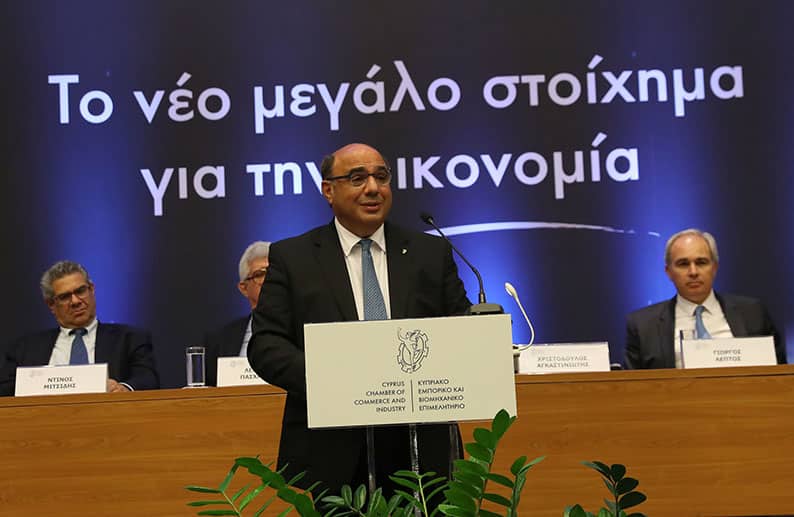 The Cyprus Chamber of Commerce and Industry (Keve) on Thursday announced that its upcoming annual general meeting, which will take place on December 19 in Nicosia, will also commemorate the chamber’s 95th anniversary, with President Nicos Anastasiades addressing the event.

Anastasiades’ address is expected to touch on a number of topics, primarily focused on the government’s initiatives and measures to boost the Cypriot economy.

The event’s keynote speaker will be Othon Theodoulou, the executive chairman of Thetaco Traders and former president of the Larnaca Chamber of Commerce, who will speak on Keve’s positions and proposals in relation to strengthening Cypriot businesses and entrepreneurship.

In his own address, Keve president Christodoulos Angastiniotis said that the “chamber has reached 95 years of comprehensive activities”, before reiterating the chamber’s stance towards inflation, reforms, labour demands, and the necessary steps going forward.

“I am certain that we are all proud of the history and the work that the Chamber of Commerce is carrying out in our country; we are all honoured to be members of the large and dynamic Cyprus family of chambers,” Angastiniotis said.

“Today, our chamber is a modern, flexible and reliable organisation, that with its actions contributes to the development and progress of our country,” he added, noting that “having the necessary technological equipment, the most qualified executives, and the most modern building facilities, Keve is able to intervene effectively and decisively in economic events and formulate policies and strategies for the economy”.

Furthermore, the Keve president said that the chamber is consistent, responsible and stable in its positions, something which allows the organisation to constructively advise the government and House of Parliament, while also actively participating in labour events, promoting the Cypriot economy abroad and helping to develop international relations to benefit of the country.

Referring to the economy, Angatiniotis stressed that Cyprus finds itself in an uncertain and difficult time.

“The Cyprus Chamber of Commerce strongly feels the responsibility it has towards the economy and its member companies,” he said.

“We all know that the energy crisis we are experiencing has external causes, namely the war in Ukraine and its side effects, however, we have no choice but to find ways to manage this crisis,” he added, noting that Cyprus is already experiencing an inflation rate of approximately 8 per cent, which is abnormally high for the country.

He also explained that businesses and households continue to suffer from the high cost of both products and services, which are frequently subject to price increases.

“In order to contribute to the protection of citizens’ incomes, the government has announced measures to the tune of €300 million,” he said, noting that these measures concern the subsidy of electricity, and the support of vulnerable groups of the population, among other things.

“We find that these measures, although they are in the right direction, do not yield the expected results, and the reason they are not effective is that international developments are not conducive to their efficacy,” he added.

The Keve president said that although he acknowledges the rationale behind a gradual increase in interest rates as a measure to de-escalate inflation, he expresses reservations and concerns about the possible effects of this measure on the real economy, businesses and households.

After welcoming the high growth rates that the economy experienced in 2022, he pointed out that “care is needed going forward and we will certainly have to resolve our remaining structural problems”.

In this context, he said, the chamber is concerned with the delay in promoting certain reforms.

“This obstruction may cost us in two ways: first, we will risk losing resources from the European Union’s Recovery and Resilience Fund, and second, we will delay the modernisation of the country and its infrastructure,” he said.

“Following these issues, are the daily problems of the economy which concern labour shortages in specific sectors, immigration, the bureaucracy of the public sector, the slow steps in the digital transformation of the economy, the absence of new incentives to attract foreign investments, as well as delays in the completion of infrastructure projects, among other things,” he added.

What is more, Angastiniotis said that Keve is concerned by the attitude of the trade union movement on labour issues, including new demands by trade unions concerning the minimum wage and the cost of living allowance, saying that these far exceed the ability of businesses to absorb them.

Angastiniotis made it clear that the Chamber of Commerce is not going to accept changes to the recent agreement on the minimum wage, while in terms of the cost of living allowance, its position is that this measure “should be replaced with another, more rational mechanism”.

“The trade union movement must realise that businesses today do not have the capacity to bear new burdens,” he stated.

Finally, he refers to the energy issues plaguing the global economy, pointing out that what is happening internationally in this sector necessitates that definitive decisions be made by Cyprus.

“The exploitation of our own gas deposits, the cooperation with neighbouring countries, the coverage of the internal market, the transmission pipelines, the liberalisation of the electricity market and the acceleration of investments in renewable energy sources are issues that must be clarified,” Angastiniotis concluded.