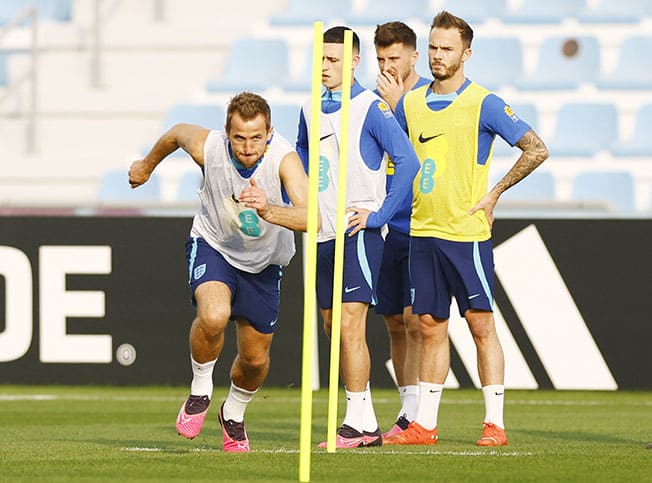 England were still unsure of their full potential when they reached the World Cup semi-finals in Russia four years ago but have now built belief over the years that they can finally win the tournament, skipper Harry Kane said on Friday.

A young and inexperienced England side defied the odds in Russia, where they were eliminated after extra time by Croatia but Gareth Southgate’s squad has since proved to be title contenders as they seek their first trophy since 1966.

England reached the final of the Euros last year where they lost in a penalty shootout to Italy, but Kane is confident they can dethrone world champions France when they meet their European neighbours in Saturday’s quarter-final.

“Looking back in 2018 we didn’t really know what to expect from the group. Of course we went there with the belief that we could win, but it was almost a new experience for a lot of us,” Kane said.

“Obviously we got to the semi-final there and everyone was over the moon. But whether we had the full belief to go and win the tournament, I’m not quite sure. I think we backed that up in the Euros, got into another final which we lost (on penalties).

“I feel like the belief has been building and building over the four or five years now. We entered this tournament believing that we can win it… I know we’re going into the game with maybe more belief than what we did back in 2018.”

Southgate said the experiences the team has been through in the last four years were important reference points which taught the squad how to play tournament football.

“We’ve had to come through many different ways of winning games. Some defeats have hurt, but we’ve learned a lot from them and they prepare you for nights like tomorrow where you’ve got to produce the very best version of yourselves,” he said.

“The mentality is key, the belief and the mentality that we deserve to be there. We’re ready to fight France for that place in the semi-final.”

The focus has firmly been on whether England’s Kyle Walker – returning from groin surgery and recovering in time for the World Cup – can handle the pace and guile of France’s electric forward Kylian Mbappe, the tournament’s top scorer.

Mbappe has issued a warning to rival teams with five goals and two assists in Qatar so far, but Southgate said Walker is ready after the Manchester City defender played an hour against Wales and the full 90 minutes against Senegal in the last 16.

“We always wanted to give Kyle the opportunity to be fit for the tournament. He’s been a very important player for us over the last six years and we’ve managed that process well,” Southgate said.

“But we play France, who are a fantastic team. We’re aware of all of their attacking players and the quality of the whole squad – that’s what has made them so strong to be able to cope with the loss of some very big players.

Deschamps’s Chelsea side beat Southgate’s Aston Villa in the 2000 FA Cup final and when asked if he had a score to settle with the Frenchman, the English manager laughed it off.

“Well, I know revenge is a dish best served cold, but that would be pretty freezing, wouldn’t it?” he said.

“No, we were underdogs that day. Chelsea had phenomenal experience in their team… so (it was a) bit of a mismatch really.”