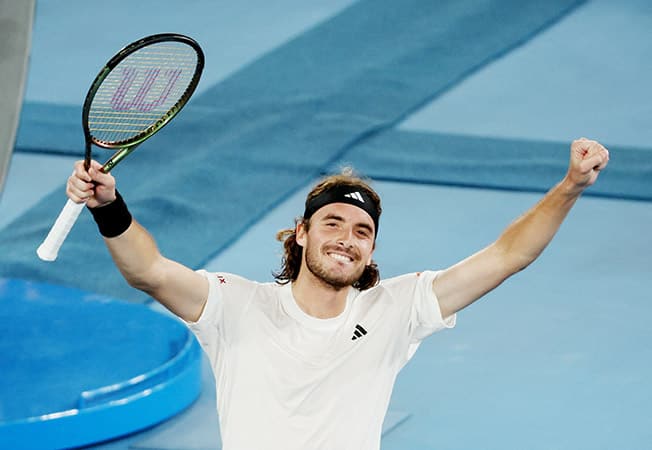 Victoria Azarenka showed glimpses of the form that took her to the 2012 and 2013 Australian Open titles with a vintage display to reach the semi-finals on Tuesday, before Stefanos Tsitsipas continued his march towards a maiden Grand Slam title.

Twice Grand Slam winner Azarenka meets Wimbledon champion Elena Rybakina in the last four, but it was the end of the road for Sebastian Korda, whose dreams of emulating his famous father ended in pain and disappointment earlier in the day.

Having been beaten in the opening round by Jessica Pegula two years ago, Azarenka gained revenge by dismantling the in-form American third seed 6-4 6-1 to reach the semi-finals at Melbourne Park for the first time in a decade.

“We had so many rallies and I wanted to try to stay there, take opportunities because she was going to take everything if I don’t try to win myself and I’m very proud that I executed my game plan really well,” said Azarenka.

The 33-year-old from Belarus was aggression personified in the match but conceded that it was “nerve-racking” to play in front of Rod Laver, the Australian great after whom the main showcourt is named.

“I feel like you want to show your best tennis in front of the best and I hope I did that and you guys enjoyed watching me because I really tried my best,” she added.

Former French Open runner-up Tsitsipas also showed some of his best form, sealing a 6-3 7-6(2) 6-4 win over Jiri Lehecka, and said he was happy to have all the answers to the questions the unheralded Czech posed.

“I can say it was a fair dinkum type of performance,” Tsitsipas said, once again bringing out the Australian slang that has become the feature of his post-match chats in the tournament this year.

“It felt different from any other type of match but I found the solution in the end.”

Korda tried in vain to find an answer and continue playing against Karen Khachanov but threw in the towel in their quarter-final match while trailing 7-6(5) 6-3 3-0 due to a wrist issue.

Khachanov, who had also reached the last four of the 2022 U.S. Open, said it felt great to be back in a Grand Slam semi-final after reinventing himself.

“Obviously not the way you want to finish a match,” said the 18th seed, who will face third seed Tsitsipas. “I think until a certain point, it was very competitive, very good battle.

“Sebastian beat one of my friends Daniil Medvedev in three sets and Hubert Hurkacz in five sets I guess, he was playing great tennis.

“I’m feeling really good, to be honest, really happy with my level and how I compete and I’m looking forward to the semi-finals here in Australia the first time.”

Rybakina also booked her place in the semi-finals for the first time, the Kazakh 22nd seed beating Jelena Ostapenko 6-2 6-4 in a match that was played under the roof after a rain shower halted play.

“I’m super happy,” said Rybakina. “Of course, I was nervous, particularly in the last game, but I’m happy that I managed my emotions. I played really well today.”

Having started her campaign on one of the outer courts at this year’s championship, Rybakina was every bit the star on Rod Laver Arena with a dominant display in which she sent down 11 aces to quell 2017 Roland Garros champion Ostapenko.