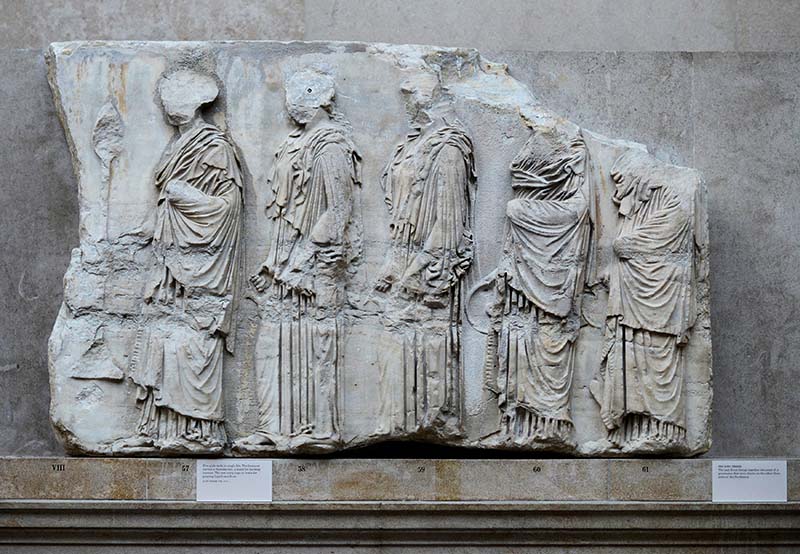 FILE PHOTO: Five girls walk in a single file, part of a collection of stone objects, inscriptions and sculptures, known as the Elgin Marbles displayed at the Parthenon Marbles' hall at the British Museum in London October 16, 2014. REUTERS/Dylan Martinez/File Photo

Obvious thievery makes headlines every day. Then there’s historical thievery where old, lax ways enabled procurement of indigenous cultural artefacts by other countries for their museums. On a BBC radio programme week before last, the Parthenon Marbles came up. A woman argued that the Marbles should not be returned, they had been housed safely in the British Museum for around 200 years where many foreign visitors had the chance to view these treasures of Greek antiquity. A man said more reasonably that the Marbles had been on the Parthenon for millennia.

I caught neither names nor titles. The housing cliche? Greece is perfectly capable of housing her treasures and a high percentage of foreign tourists visit the ancient site from which these excellent examples of Greek sculpting perfection were removed. Loaning to, she said, was not an acceptable option. Why should it be? It’s more than obvious where these objects belong. Then, it might set a precedent with other countries from which artefacts and statues etc., have, in the past often been looted, let’s not pretend otherwise.

The argument about the Marbles being ‘legally’ procured doesn’t stand when the giver, the Ottomans in occupation of Greek heritage, and the British taker, Lord Elgin, were alien to the land and its cultural inheritance. If one of the lions in Trafalgar Square were removed from its origin plinth and Greece had procured and held onto it, or any parts of buildings or statues dear to British hearts, their gap would be more than obvious, they would be emotionally irreplaceable.

Britain shouldn’t have been considering ‘loaning’ Greece its birthright but giving it back. We speak of honour among thieves, where does governmental honour replace the greed of acquisition? Who has the courage to publicly admit these intrinsically valuable Marbles belong to Greece and the just thing to do is return this gift of ancestral artistry bequeathed them.

Speaking of thieves and Greeks, the most prominent name and pictures I saw/read in reports about the MEPS and the alleged loadsa lolly scandal from Qatar, was of good-looking Greek MEP, Eva Kaili. That upper level people take brown envelopes, or is it bags of cash?, is nothing new. What this affair brought into sharp focus is a thing ordinary folk seldom ponder in relation to the EU – the lobbying that exists there.

There may be those who lobby for good causes, but how many are doing it for the gain of private players and themselves? Why, in any appointed or elected body with the authority to tell the rest of us how to behave, are people intent on influencing and steering the decisions they make allowed to roam the corridors of power in the first place?

MEPs get over €7,000 basic salary after tax, financial perks including pensions and end-of-term allowances. It’s become the common conception that politicians everywhere put into law their own financial gain. The sheer hypocrisy of some who say one thing in public yet do the opposite in power and get away with it makes one wonder if insincerity is now generally accepted by system weary voters as a norm they’re helpless to change.

Euro MEPs don’t have to declare whom they meet outside official work missions, despite this not being the first time an MEP was involved in profit-making criminal activity.

Cyprus joined the EU in the hope of feeling safer within its protective folds. Are we? It appears no matter where you are geographically, advantages, contacts, networking and personal financial improvement are foremost for those who see their job as an opportunity to be abused, takers not servers with election pledges soon forgotten. The poor who can’t afford heating or roam supermarket aisles for the cheapest brands are of scant interest, they are mere vote fodder who give the elite even greater elitism, the chance to say a lot and do little for them once a term has been initiated. Then there are those who, in full knowledge of untruths and bad practice, still willfully elect people they know are dishonest or dangerous. Unlike the protected Marbles, honest authority has become terribly eroded over time.