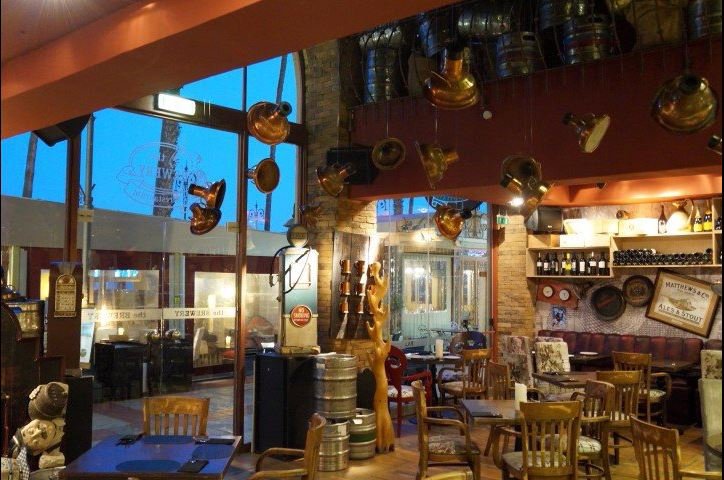 Birthdays are a time to celebrate so I gathered together the family and headed to Phinikoudes for an enjoyable lunch. We opted for The Brewery as I had heard about the variety on the menu and thought that there would be something for everyone.

No sooner had we been handed the menus than my brother ordered one of the famous Brewery beer kettles so that we could have a tap on our table and just pour our own beer.

The menu is extensive and does indeed have many different options. There was actually so much it took a while to decide what to have, narrowing down our options and then discussing them to see if we would get food envy if someone else ordered a different dish.

In the end, food envy won as three of us ordered the Dubbel burger, a burger with two patties, cheese, bacon and mushrooms. Other dishes ordered were the Monk Pork Chop, a pork chop marinated in a fruity beer, Kalamari and a Black Sriracha burger, black because of the coloured bun. The burgers are not served with a side so that must be ordered as extra. We all decided to go for chips with cheese and bacon.

With the food ordered much to our delight the three-litre beer kettle was brought to the table. My brother played barman and poured everybody a beer. There was a pause at one moment when we noticed something floating in one of the beers. We informed a waiter who called over the barman and he ensured us that it was the type of beer and that there is nothing wrong with it. Smiles all round and glasses clinking to the sound of ‘cheers’ and ‘happy birthday’. Again, a pause. The beer was flat and had a strange taste, resembling the taste of mould. Again, the waiter was called over, as was the barman and the beer was taken away to be replaced.

Despite being occupied with the beer, it had been a while since we had ordered and the head waiter came over to joke with us that the food ‘will only be another hour’. He wasn’t far off. We had indeed waited almost an hour for our food. Bearing in mind that the restaurant wasn’t really even that busy, it was difficult to be understanding. Finally, the food started to arrive. Everything except the kalamari. Again, the waiter came over to joke they were at sea catching the squid.

After having nearly dropped my dish on me, we noticed that one of the sides of chips was plain and didn’t have cheese or bacon. The waitress apologised and brought out a small plate with some bacon pieces and a small ramekin of a white, runny substance which they claimed to be cheese. No one was impressed with this side. The Dubbel burger looked very impressive. It was huge! The melted cheese inside however, had congealed as it had started to go cold. The burgers were actually dry and overcooked, the buns toasted and hard. Finally, the kalamari arrived. Unfortunately, it was hard and inedible. The waiter came over again to check if everything was ok. We told him about the burgers and mentioned that we hadn’t thought to say how we would like them cooked so perhaps it is our fault. He smiled at told us that all burgers are cooked medium. We cut a burger open to show him and he said ‘Ah, that looks well done’. He huffed and walked away. Was he upset with us for noticing, or the chef for over cooking?

By way of apology for the disastrous experience, we were offered coffee. What could go wrong? A few Cyprus coffees and a Freddo espresso. The cups for the Cyprus coffee did not fit the saucer they were on and it was sheer luck that one of them did not spill everywhere as the waitress tried to put it on the table. The Freddo espresso was so watered down it just looked like muddy water from a tap.

Safe to say, I don’t think I’ll be visiting again. Definitely a birthday I won’t forget!

HOW MUCH Approx €25 per head (depending on the order)

Hammers, chisels and a microscope: inside a diamond jewellery workshop