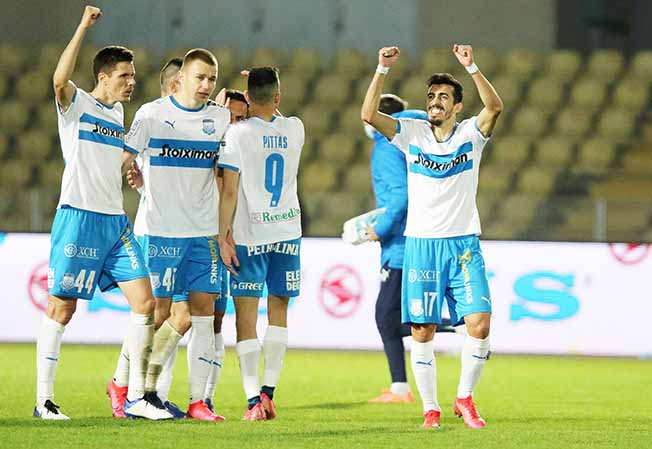 With 21 goals scored across seven games, the first round of the Cyprus first division in 2021 has set a benchmark for the remainder of the season.

The end of round 17 finds Apollon back at the top of the table with 36 points after their win over now fourth-placed Anorthosis.

The game was one of the most exciting and tactically intriguing I have seen in recent times in Cyprus, with Anorthosis manager Temur Ketsbaia devising a strong first-half plan to offset Apollon’s focal points while maximizing his own team’s strengths, namely Anorthosis’ aerial prowess and Giorgi Kvilitaia’s overall ability to threaten the opposition.

Ketsbaia’s tactics worked perfectly for the first 45 minutes, particularly because Apollon manager Petrakis’ own first-half set-up had been half-hearted and toothless. Anorthosis had given Apollon essentially half the pitch, ceding space in the opponent’s half so that they could clog up the midfield axis and the penalty area behind it, with Apollon not really taking advantage of this to pin Anorthosis back with players who would be committed high up the pitch.

Instead, the middle block approach with Nicolas Diguiny as a roaming forward minimized the potential of threatening the Famagusta club with any real intent. This was rectified in the second half, particularly with the early introduction of centre forward Dabo. Three goals in the span of 21 minutes completely flipped the game on its head.

After the game, Anorthosis manager Ketsbaia reserved both his praise and ire entirely for his own players, attributing the final result to his own team’s performance.

“Both halves belonged to us. We did not have one good half and one bad one. We could have finished the game off in either half”, Ketsbaia said.

The Anorthosis manager was furious at his defenders, with Gordon Schildenfeld receiving the brunt of the blame. The Croatian centre back is expected to leave the club within the coming weeks, if not the coming days.

Earlier on Sunday, Omonia continued their winning streak with an impressive 0-3 win over AEK Larnaca. The Greens have now won five straight games and find themselves in third place, just four points off leaders Apollon.

“I am happy with our form. Today’s game was not reflected in the final score because we were very effective”, said Omonia manager Henning Berg after the game.

“AEK were very good and had chances to score a goal”, Berg added.

Meanwhile, Apoel continued to be plagued by negative results after losing 0-2 at home to Enosis on Saturday evening. Apoel have now won just twice over the past ten games, drawing twice, and losing six times.

Apoel manager Mick McCarthy did not hide his dismay during his post-match press conference.

“I am disappointed and ashamed of our performance, but I am also shocked”, McCarthy said.

“I am not used to apologizing for defeats but I am apologizing to our fans because the performance was unacceptable”, he later added.

McCarthy also explained that Enosis had played well and merited their win, noting that Apoel need to show more spirit, quality and decisiveness.

Apoel are now in eleventh place with 16 points with 15 games played. They are 5 points off bottom-placed Enosis (16 games played) and are 12 points away from entering the top six.

The next round of games begins on Tuesday evening with games between Enosis and Karmiotissa, Ermis and Salamina, and Doxa and Apoel. The full schedule can be seen below.