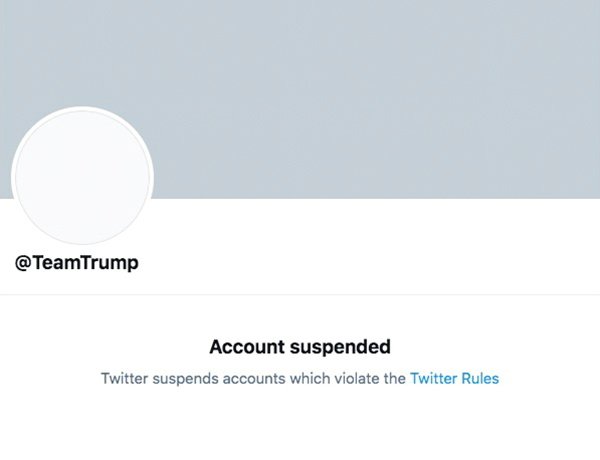 The suspended Twitter account for U.S. President Donald Trump's campaign @TeamTrump is seen in this screengrab obtained via social media on January 8, 2021. Twitter via REUTERS ATTENTION EDITORS - THIS IMAGE HAS BEEN SUPPLIED BY A THIRD PARTY. MANDATORY CREDIT.

Twitter Inc on Friday deleted new tweets posted by U.S. President Donald Trump on official government account @POTUS and suspended the account of his presidential campaign, after booting his personal account off the platform permanently.

Trump tweeted “We will not be SILENCED!” from the @POTUS government account, with 33.4 million followers. Twitter had permanently suspended the president’s go-to megaphone, his @realDonaldTrump personal account, hours earlier.

The company said accounts used by Trump to try to get around the ban could face permanent suspension as well under its “ban evasion” policies.

“Twitter is not about FREE SPEECH,” Trump wrote in the now-deleted tweets, adding that he is considering building his own social media platform in the near future.

Twitter shut down his @TeamTrump campaign account shortly after it sent out a tweet with a “statement from President Trump” accusing Twitter of “banning free speech” and coordinating with “the Democrats and the Radical Left” to silence him.

The account shortly before that had pointed its 2.3 million followers to its account on Parler, which is popular with conservatives for its hands-off approach to content moderation.

Owners of the two biggest mobile app stores took action on Friday against the Parler social networking service because of posts inciting violence, with Alphabet Inc’s Google removing it and Apple Inc warning it may do the same.

Google said the app favored by many supporters of U.S. President Donald Trump must demonstrate “robust” content moderation if it wants to get back in the store. Apple gave the service 24 hours to submit a detailed moderation plan, pointing to participants using the service to coordinate Wednesday’s siege of the U.S. Capitol building.

The actions by the two Silicon Valley companies mean that the network seen as a haven for people expelled from Twitter could become unavailable for new downloads on the world’s main mobile phone app stores within a day. It would still be available in mobile browsers.

Parler Chief Executive John Matze said in posts on his service on Friday that Apple was applying standards to Parler that it did not apply to itself and the companies were attacking civil liberties. He added in a text message to Reuters, “Coordinating riots, violence and rebellions has no place on social media.”

In suspending the service, Google, whose software powers Android phones, cited its policy against apps that promote violence and gave recent examples from Parler, including a Friday post that began “How do we take back our country? About 20 or so coordinated hits” and another promoting a “Million Militia March” on Washington.

In a statement, Google said that “for us to distribute an app through Google Play, we do require that apps implement robust moderation for egregious content. In light of this ongoing and urgent public safety threat, we are suspending the app’s listings from the Play Store until it addresses these issues.”

In a letter from Apple’s App Store review team to Parler seen by Reuters, Apple cited participants of the mob storming the U.S. Capitol building on Wednesday.

“Content that threatens the well-being of others or is intended to incite violence or other lawless acts has never been acceptable on the App Store,” Apple said in the letter.

Apple gave Parler 24 hours to “remove all objectionable content from your app … as well as any content referring to harm to people or attacks on government facilities now or at any future date.” The company also demanded that Parler submit a written plan “to moderate and filter this content” from the app.

Matze, who describes himself as libertarian, founded Parler in 2018 as a “free-speech driven” alternative to mainstream platforms but began courting right-leaning users as prominent supporters of Trump moved there.

Those who have joined include commentator Candace Owens, Trump’s lawyer Rudy Giuliani, and right-wing activist Laura Loomer, who handcuffed herself to the door of Twitter‘s New York office in Nov. 2018 to protest a ban on her by the site. In November, conservative activist Rebekah Mercer confirmed that the she and her family, which includes her father and hedge-fund investor Robert Mercer, have provided funding to Parler.

Russian companies want to make it rain in Cyprus