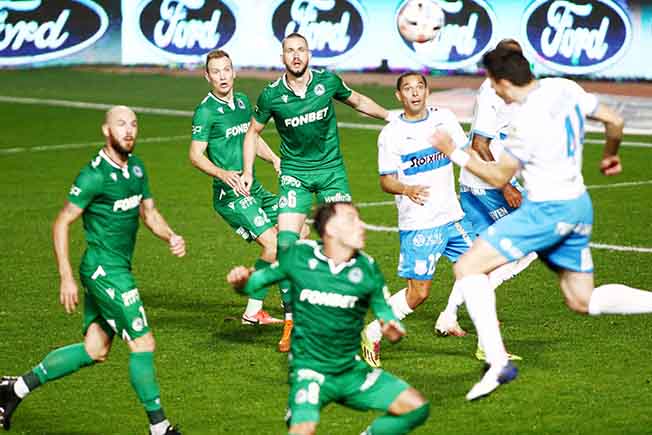 Should Omonia win the game, they will be tied with Apollon on 39 points at the top. An Apollon win meanwhile would extend their lead over the Nicosia club to a more substantial six points

League leaders Apollon and third-placed Omonia will clash for the second time in the span of a week when they face each other on Wednesday evening in the Cyprus Division (18.00).

The fifth-round game between the two sides was originally called off after both teams had made a request to the Cyprus Football Association to postpone the fixture due to their European qualifying obligations.

As such, neither team is allowed to field players who would have been unavailable for the original date of the fixture.

For Omonia, this means that they will be without attacking midfielder and winger Fotis Papoulis who was serving a three-match suspension back in October, while Apollon will be without new signing Giorgi Papunashvili, since the Georgian forward joined the Limassol club during the January transfer window.

Apollon will hope that star defender Attila Szalai will be able to maintain his focus while he continues to be linked with moves abroad.

Szalai has been reportedly attracting interest from a number of sides, including Turkish side Fenerbahçe.

Speaking to Hungarian media earlier this week, Szalai’s father said that his son is more interested in a move to Germany.

“I don’t think he will head east (in reference to Turkey). His heart is pulling him towards the Bundesliga. There’s every opportunity for him to move this summer but it all depends on Apollon’s chairman”, said Attila Szalai Sr.

They love him there, they appreciate him and even though they would like to sell him they will not do so at any price. He is in an excellent place at the moment. The Cypriot league is strong, the quality of matches is good and teams play quick football. In defence, he is playing with experienced players and he can learn a lot”, added the player’s father.

Meanwhile, Omonia manager Henning Berg spoke to the club’s in-house channel, providing his thoughts ahead of the game with Apollon.

“It’s not the most normal thing to face the same team in such a short time period. This might affect both sides. However, we have done our analysis and Apollon have done theirs. We know each other very well”, said Berg.

“We have taken seven points in the last three games and I believe this is good. We played AEK on Sunday, Apollon Wednesday (2-1 home win for Omonia in the league) and AEL on Saturday. Three tough matches and the seven points we took are pretty good. We could have done even better if we defended better in the last few minutes against AEL but seven points in total are good for us”, added the Norwegian.

Should Omonia win the game, they will be tied with Apollon on 39 points at the top. An Apollon win meanwhile would extend their lead over the Nicosia club to a more substantial six points.

The second game of the day is also a previously postponed fixture, with Apoel taking on AEK Larnaca in Nicosia (18.00) after their original game in the 15th round was called off due to Apoel’s then-spiralling Covid-19 crisis.

Meanwhile, Apoel have released yet another player after the contract termination of Portuguese defender André Geraldes. Geraldes has already found a new club after his return to Israeli side Maccabi Tel Aviv.

Do jabs equal jobs? Fed thinks vaccine can get US economy moving

Dialling down the pressure: two parenting experts based in Cyprus offer online advice