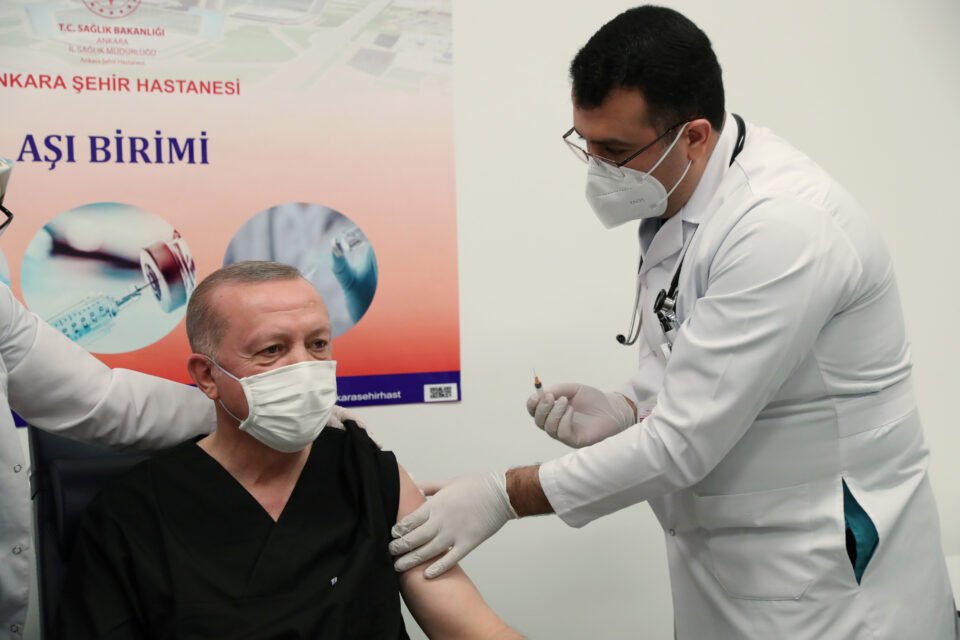 Turkish President Tayyip Erdogan received his COVID-19 vaccine in front of TV cameras on Thursday, a move which a spokesman for his AK Party said aimed to alleviate any public doubts about the effectiveness of the shot.

Erdogan received his first dose of the vaccine at the Ankara City Hospital. He arrived with Health Minister Fahrettin Koca, who received the first vaccine in the country a day earlier.

Speaking to reporters outside the hospital, Erdogan said he and senior members of the AK Party were all getting inoculated, and urged other politicians to endorse the vaccine.

“The number of vaccines in the first stage is clear. Now, another 25-30 million doses will come in the period ahead. We want to continue this rapidly,” he said, adding that all the incoming vaccines would also be from Sinovac for now.

Health Minister Fahrettin Koca, speaking after Erdogan left the hospital, said all citizens should get vaccinated when their turn comes.

Turkey has reported more than 2.3 million infections since March and still reports around 10,000 new cases and 170 deaths each day after a month of weekend lockdowns and nightly curfews.

At a research hospital in Istanbul, 30 clinics were set up to administer the vaccine. Health workers were given a first dose, with a second to be given 28 days later.

Surgeon General Nurettin Yiyit said the hospital could vaccinate around 1,800 people per day and that its 3,500 staff, including nurses and janitors, could be vaccinated in two days.

“We spent around 10 months in white overalls, supporting people as they struggle for life. Health workers know very well that this situation cannot be taken lightly and that the vaccine is needed,” Yiyit said.

The vaccination of health workers is expected to be completed within a few days and the process will then move on to the next group, which includes those aged over 65.

As of 1310 GMT on Thursday, Turkey had vaccinated more than 210,000 people, according to the Health Ministry.

Nurse Elcin Aslantas said health workers had faced many difficulties. “We don’t have much option other than trusting this vaccine really,” she said after getting the shot.

Turkey has ordered 50 million doses of Sinovac’s CoronaVac and has received 3 million. It is in talks for Russia’s Sputnik V vaccine, and the shot developed by Pfizer and BioNTech, and is working to develop one domestically.

Trials from around the world have shown varying results for the Chinese vaccine, which Indonesia began administering on Wednesday, including late-stage clinical data from Brazil showing an efficacy rate of only 50.4%.

Last month, Turkish researchers said CoronaVac showed a 91.25% efficacy based on an interim analysis of 29 cases. A fuller analysis can take place when they reach 40 cases.

Turkey’s trials will continue as it moves ahead with the mass inoculation, the trials coordinator told Reuters.

Advisory science council member Serhat Unal said the number of participants in Indonesia was small compared to Turkey and that Brazil had a different definition of cases, with their efficacy rate based on those who did not show symptoms.

“If the Health Ministry of the Republic of Turkey has purchased a vaccine… that is a reliable vaccine for us.”