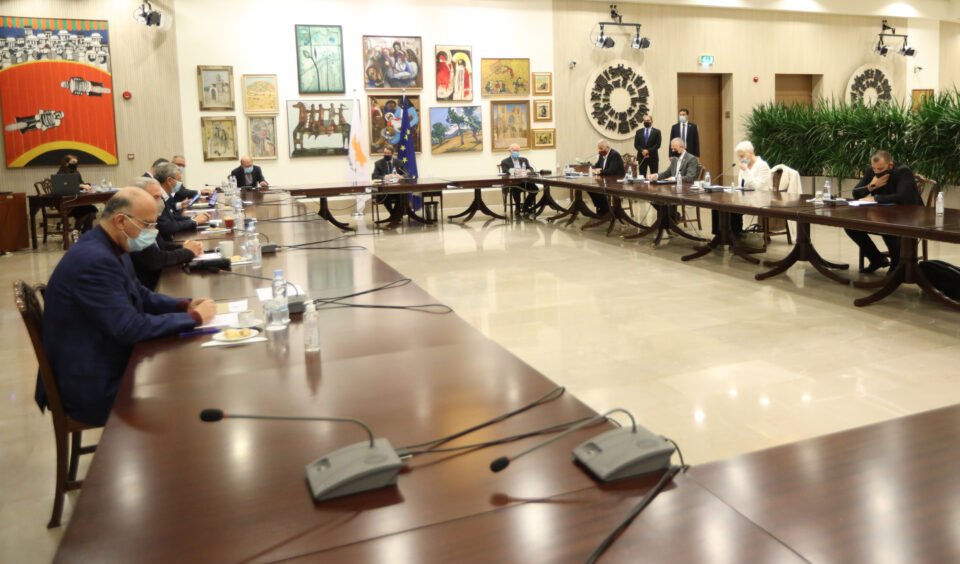 President Nicos Anastasiades invited the members of the National Council to escort him to the informal five-party summit to be convened by UN Secretary-General Antonio Guterres, it was announced on Thursday.

A meeting of the National Council, the country’s top advisory body, took place at the Presidential Palace, to discuss developments on the Cyprus issue, following a meeting of Anastasiades with UN Special Envoy, Jane Holl Lute last Monday.

Deputy government spokesman Panayiotis Sentonas said after the meeting that Anastasiades suggested the members of the National Council escort him to the five-party summit, “as this is a crucial meeting on the Cyprus issue.”

This, however, will be discussed at a later stage when a date for the conference is set by the UN Secretary-General (UNSG), he added.

Sentonas said the president briefed the members of the National Council on the latest developments, but also on the initiatives he has taken in relation to the Cyprus issue.

Anastasiades also briefed the National Council on his meeting with the Lute, who conveyed to him Guterres’ decision to convene an informal five-party meeting on the Cyprus issue in New York but also on his telephone conversation with Guterres on Monday.

The president also presented the proposals he forwarded to the UNSG, responding to his call for specific confidence-building measures to assist in the resumption of negotiations.

After the meeting, most opposition leaders reiterated their concerns about the five-party summit.

Akel leader Andros Kyprianou said Anastasiades asked the party heads on whether he should go to the five-party summit or not. The summit is expected to take place in February.

“It is imperative we go to the five-party summit, very well prepared, however,” Kyprianou said. “Otherwise, we will enter a prolonged impasse, which will bring us closer and closer to the final division of our country and people.”

Diko leader Nikolas Papadopoulos said statements both by Turkey and Guterres do not leave margin for optimism for the outcome of the summit.

He said Anastasiades must make sure that the solution framework does not change, despite pressure from Turkey for a two-state solution, while Guterres must make clear who are the parties at this five-party summit. He said if the Republic of Cyprus is invited as a ‘Greek Cypriot community’ this would mean downgrading of the Republic and upgrading of the breakaway regime in the north.

“In any case, the President of the Republic should not suggest any connection between the operation of Tymbou [Ercan] airport and any other action or initiative of the Turkish side,” Papadopoulos said.

Edek leader Marinos Sizopoulos said the briefing by Anastasiades confirmed the vagueness related to the five-party summit. He said that his party’s concerns only increase when taking into account Turkey’s provocative actions and statements but also references by Guterres in his reports to a ‘Greek Cypriot administration’ and ‘north Cyprus’ and efforts to downgrade the Republic of Cyprus.

Giorgos Lillikas, head of the Citizens’ Alliance, said a five-party summit was Turkey’s idea, which was adopted by the UN.

He said his party was suspicious of the timing of the summit given that the UN knows Turkey’s positions on a two-state solution which would lead the meeting to a standstill.

Lillikas said dangers were looming. “We do not suggest that the president should not attend, however because our refusal to attend would facilitate Turkey in its goals,” he said. He expressed his fears that the Greek Cypriot side would leave the summit with losses while Turkey would be facilitated in ‘legitimising’ its positions on two states and a confederation by tabling them before the UN Secretary-General.

Head of the Solidity Movement, Eleni Theocharous said she advised Anastasiades not to go to the summit, citing “traps” for the Republic of Cyprus because it “does not have the necessary status to be able to firmly negotiate its rights and with prospects of success.”

Leader of the Greens, Charalambos Theopemptou, said Anastasiades must go, but “we need to have a proper preparation beforehand, to make a risk analysis, to know exactly what our reaction will be depending on the requests that will be put forward.”
On Tuesday, the UN Secretary-General’s spokesperson Stéphane Dujarric stressed that Lute was continuing her consultations with all parties, including the guarantor powers.

Greece seeks to send 1,450 migrants back to Turkey