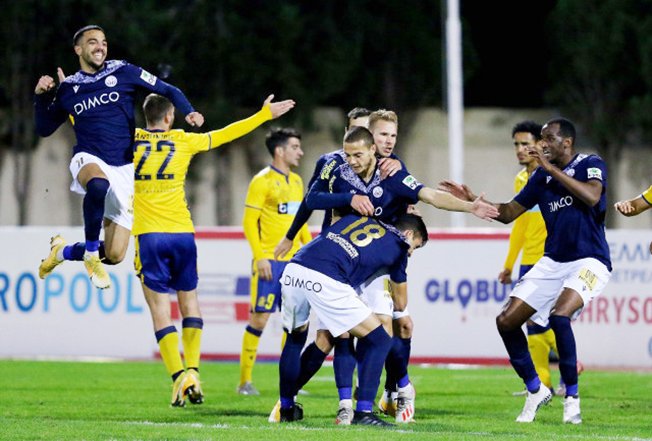 AEL were denied top spot in the Cyprus First division after a surprise 1-0 defeat at Paralimni on Friday night.

The Limassol side went into the game knowing a win would see them leapfrog bitter city rivals Apollon at the top of the table.

After only 15 minutes they had a great chance to take the lead when they were awarded a penalty, but Rieira’s attempt was saved by Enosis goalkeeper Gacevski.

With no further score, the roles were reversed just over 20 minutes from the end when Enosis themselves won a penalty, but AEL’s Vozinha emulated his opposition keeper by pushing the ball out for a corner.

Amazingly, Enosis scored from the corner, with Maisuradze firing home what turned out to the winner.

Though AEL ramped up the pressure after going behind and creating several chances to score, they were unable to breach Enosis’ defence.

Defeat leaves AEL on 38 points, two behind leaders Apollon, and just one point above Omonia in third.

On Saturday, Anorthosis and Salamina will face each other in the Famagusta derby. A win will be imperative for Anorthosis if they want to stay in the title race, while a win for Salamina could potentially push them into the top six.

Salamina have enjoyed their best form of the season recently, with the club going unbeaten for five straight games and recording four consecutive victories in the process.

Earlier on Saturday, Omonia will face Ethnikos Achnas in Nicosia. Ethnikos are currently bottom of the table on 12 points and are desperate to get something from the match.

Speaking to the club’s in-house channel, Omonia defender Tomáš Hubočan said that the game against Ethnikos will not be easy but the Greens should focus on getting the three points.

“We have to play our own game and score. We have to be effective”, Hubočan said.

Omonia manager Henning Berg was also keen to stress that it will not be easy, saying that his team will have to be ready.

“We played a lot of matches recently and Ethnikos did not play during the week. It’s not ideal but this is the reality”, Berg said.

“Against Apollon we had a good performance, I believe we had good control of the game, so we are more pleased with that performance than the one against AEL”, he added.

Leaders Apollon meanwhile, will play against Olympiakos at home in Limassol on Sunday.

Apollon will be without key player Attila Szalai who is the subject of a transfer bid by Turkish club Fenerbahçe.

The bid was first confirmed by Apollon chairman Nikos Kirzis on Friday after he was questioned by Turkish station NTV, with the club confirming a preliminary agreement with the Turkish club later during the day.

WHO sees poorer countries getting first Covid vaccines this quarter