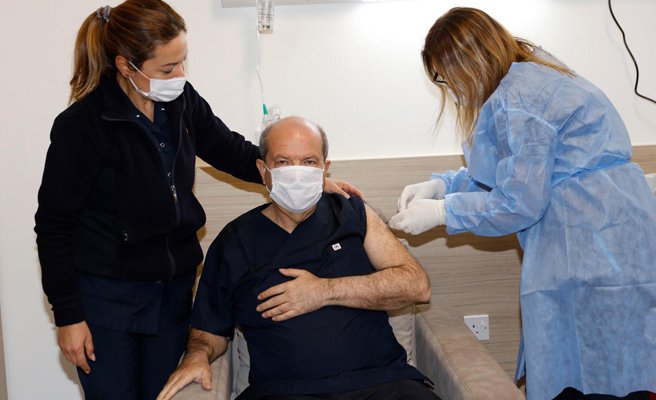 Turkish Cypriot leader Ersin Tatar kick started the vaccinations against coronavirus in the north on Friday after receiving the first jab of Chinese firm’s Sinovac batch sent this week by Turkey.

The Turkish Cypriot authorities said they plan on vaccinating 80 per cent of the population starting with healthcare professionals and the elderly.

The first batch of Chinese Sinovac’s vaccines, 20,000 doses, arrived in the north early on Thursday from Turkey.

The Turkish Cypriot community is also due to receive part of the vaccines reserved by the EU for Cyprus. Pilli said that the first 1,000 vaccines would be delivered on Monday.

Greek Cypriot co-chair of the bicommunal technical committee on health, Leonidas Phylaktou, told the Cyprus News Agency that the first 1,000 doses of the Pfizer vaccine would be delivered to the Turkish Cypriot side at 8.30am on Monday from the Ayios Dhometios crossing point.

The reason why not all 2,000 vaccines are being delivered was due to that the vaccines need to be stored at minus 70 degree Celsius and there was no suitable equipment for their transport.

For this reason, he said, the other 1,000 doses will be stored under the appropriate conditions until the time comes for their use for the second dose for the people who will receive the first dose.

“Once the appropriate means of transport is found, they will probably be given to the Turkish Cypriots earlier,” he added.

Responding to a question, he said the cost of these vaccines has been covered.

Tatar said earlier in the week that unless the vaccines were delivered directly via the EU and not through the Greek Cypriot side, they would not agree to receive them.

Following the backlash, his spokesperson, Berna Celik Dogruyol, said on Thursday that they were closely following the process and accused the Greek Cypriot authorities of creating bureaucratic difficulties that prevented the vaccines’ delivery.

And on Friday Tatar changed tack, saying that the vaccines were a health, not a political issue.