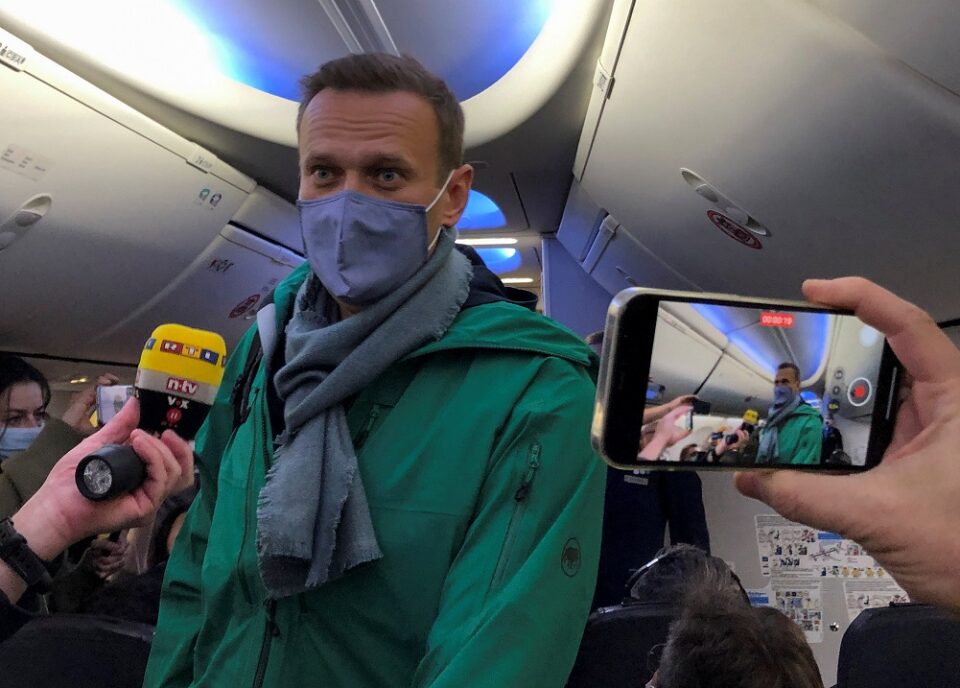 Russian opposition leader Alexei Navalny on board a plane before the departure for the Russian capital at an airport in Berlin, Germany. REUTERS/Polina Ivanova

By Polina Ivanova and Andrew Osborn

Kremlin critic Alexei Navalny took off on a plane bound for Russia on Sunday, to return home for the first time since he was poisoned last summer, despite Russian authorities’ stated desire to arrest him and potentially jail him for years.

Navalny, one of President Vladimir Putin’s most prominent domestic critics, was flown to Berlin in August last year for emergency medical treatment after being poisoned with what German tests showed was a Novichok nerve agent.

“This is the best moment in the last five months,” he told reporters after he boarded the plane in the German capital, bound for Moscow. “I feel great. Finally, I’m returning to my home town.”

He announced his decision to return from Germany on Wednesday, and a day later Moscow’s prison service said it would do everything to arrest him once he returned, accusing him of flouting the terms of a suspended prison sentence for embezzlement, a 2014 case he says was trumped up.

The 44-year-old, who boarded a plane in Berlin at the last minute from a car sitting on the tarmac, hence avoiding other passengers, made light of the risk of being arrested.

He said he didn’t think he would be arrested, calling himself an innocent person.

“What do I need to be afraid of? What bad thing can happen to me in Russia?” he added. “I feel like a citizen of Russia who has every right to return,” he added.

He was accompanied by his wife Yulia, and his spokeswoman.

Navalny, who is hoping for success in parliamentary elections in September, faces potential trouble in three other criminal cases too, all of which he says are politically motivated.

His return poses a conundrum for the Kremlin: jail him and risk protests and punitive Western action by turning him into a political martyr. Or do nothing and risk looking weak in the eyes of Kremlin hardliners.

He is expected to arrive in Moscow at around 1630 GMT.

The opposition politician, who says he has nearly fully recovered, says Putin was behind his poisoning. The Kremlin denies involvement, says it has seen no evidence that he was poisoned, and that he is free to return to Russia.

Navalny says the Kremlin is afraid of him. The Kremlin, which only refers to him as the “Berlin patient,” laughs that off. Putin allies point to opinion polls that show the Russian leader is far more popular than Navalny, whom they call a blogger rather than a politician.

SUPPORTERS PLAN TO GREET HIM

His supporters plan to meet him at Moscow’s Vnukovo airport despite a forecast of bitterly cold minus 20 Celsius weather and over 4,500 new coronavirus cases a day in the Russian capital.

So far, at least 2,000 people have used a Facebook page to say they plan to be there, with another 6,000 expressing an interest. Pro-Kremlin activists are also expected to turn up.

The Moscow prosecutor’s office, which says it has officially warned 15 pro-Navalny organisers, has said the event is illegal because it is not sanctioned by the authorities. That means that people who turn up could be detained, fined or jailed.

Reuters reporters saw a heavy police presence at the airport with dozens of police trucks.

Citing COVID-19 restrictions, the airport has said it will not allow media inside.