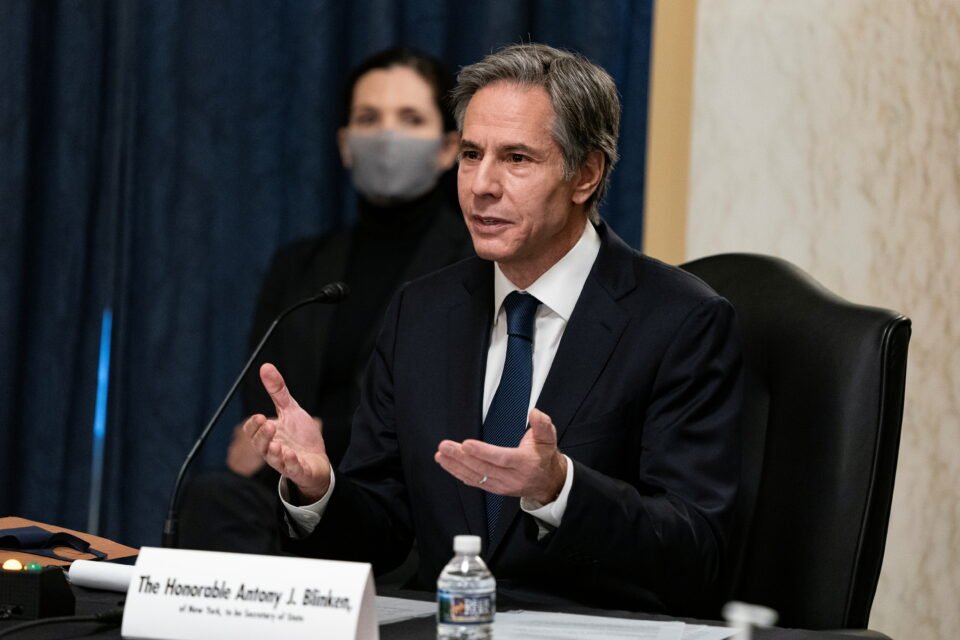 Antony J. Blinken speaks during his confirmation hearing to be Secretary of State before the U.S. Senate Foreign Relations Committee

President-elect Joe Biden’s nominee to be secretary of state, Antony Blinken, pledged on Tuesday that he will work to revitalise damaged American diplomacy and build a united front to counter the challenges posed by Russia, China and Iran.

At his confirmation hearing a day before Democrat Biden takes over from Republican Donald Trump, whose four-year tenure was marked by unilateral American action that often upset allies, Blinken said he would work with them and with humility.

Blinken, 58, a veteran foreign policy hand and close confidant of Biden, also explained why U.S. leadership is vital for the world, while promising a foreign policy that will deliver for the American people.

“When we’re not engaged, when we don’t lead, then one of two things happen: either some other country tries to take our place, but probably not in a way that advances our interests or values. Or no one does, and then you get chaos,” Blinken told the Senate Foreign Relations Committee.

“Either way, that does not serve the American people.”

Blinken testified two weeks after the building representing American democracy was stormed by thousands of members of a pro-Trump mob seeking to overturn Biden’s election victory.

The unprecedented attack on the U.S. Capitol stunned the world, further bruised America’s standing and gave ammunition to U.S. adversaries.

Biden will be taking on a much different world from the one he left four years ago as President Barack Obama’s vice president. China has assumed a larger global role, ranging from multilateral institutions to assisting development in Africa and Latin America. Ties between Washington and Beijing have sunk to their worst in decades, prompting Cold War comparisons.

There has been no indication that Blinken would face difficulty being confirmed by the Senate.

As the hearing began, the committee’s chairman, Republican Senator Jim Risch, and Democratic Senator Bob Menendez, who will become chairman after Vice President-elect Kamala Harris and new senators from Georgia are sworn in, both said they wanted Biden’s national security team to be put in place quickly.

“I think all of us have a very strong interest in seeing that the president has in place, as rapidly as possible, his national security team,” Risch said.

“The world is on fire,” Menendez said.

One of Trump’s major international actions was pulling the United States out of the 2015 international nuclear agreement with Iran. Risch and Menendez, who both opposed the pact, warned against a quick return.

“I fear returning … without concrete efforts to address Iran’s other dangerous and destabilizing activity would be insufficient,” Menendez said. However, he also said he believed there was bipartisan support for a “comprehensive, diplomatic approach” to Iran.

Risch also said any discussions with Iran should involve U.S. allies, including Israel, and he said any new nuclear deal should be submitted as a treaty for Senate ratification.

Both senators stressed the importance of a strong stance on China.

“I hope and expect that the Biden administration will pursue bipartisan cooperation on challenge of proposals posed by the Chinese Communist Party,” Risch said.

“One of those challenges is Taiwan. The PRC’s obliteration of Hong Kong’s autonomy last year makes the question of Taiwan’s future all the more urgent,” he said.