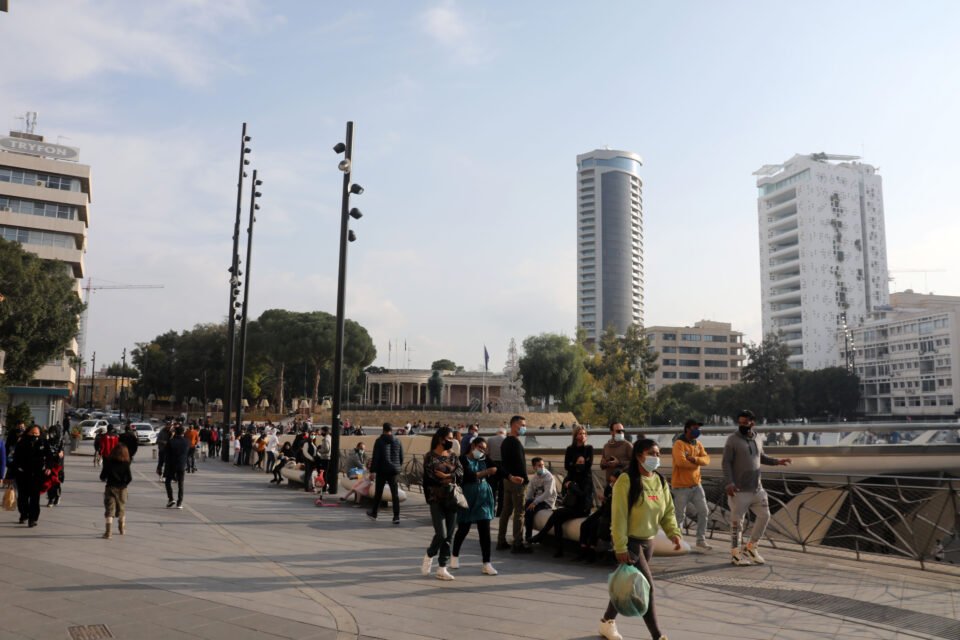 People at Eleftheria Square just before the lockdown (Photo: CNA)

February should be considered more of a transition period than a time to start easing Covid restrictions, the head of the government’s advisory committee, assistant professor of internal medicine infection prevention, Constantinos Tsioutis said on Friday.

Tsioutis said there was an apparent improvement in the number of infections but the viral load in the community remained high.

The committee will discuss the situation with President Nicos Anastasiades on Monday during which it is expected to make recommendations on how to proceed, including how do deescalate the measures depending on the situation at the time.

“By Monday we will have some additional data, which could perhaps reinforce the ones we are already seeing,” Tsioutis told the Cyprus News Agency.

Tsioutis said they also wanted to see hospital admissions by that time because it was the most important parameter that led to the decision to go into lockdown.

Tsioutis said the improvement currently seen was the result of the measures put in place in December. The results of the lockdown, which was enforced on January 10, cannot yet be evaluated, he added.

“Yes, we have an improvement in the community with a drop in the positivity rate, but the load remains high,” he said. “We want to see it drop further because easing the measures would lead to a surge and we want this surge to be controlled, to be identified in time, and not lead us to the situation we had in the previous weeks.”

However, he said, there were also the hospital admissions and those in ICUs, whose numbers remained high.

Tsioutis added that it was too early for them to say with certainty that the situation had cleared but they were expected as scientists to give their positions, explain them in detail, and make suggestions as to how to move forward under the current circumstances “but also the dangers that exist by a sudden ease in February.”

“In general, our positions as a committee is that February must be considered more of a transition period than a period of easing measures.”

“A transition from a period of strict measures, gradually, towards a period of relaxations.”

The EU meanwhile has expressed deep concern over the rapid spread of a highly infectious new variant of the virus first identified in the UK.

European Commission President Ursula Von Der Leyen said studies in the UK and Germany showed the variant’s aggressive surge with countries expecting a worsening of the epidemiological situation in the next six to 12 weeks.

Von Der Leyen urged member states to set common targets and measures in a bid to avoid the closure of EU borders.