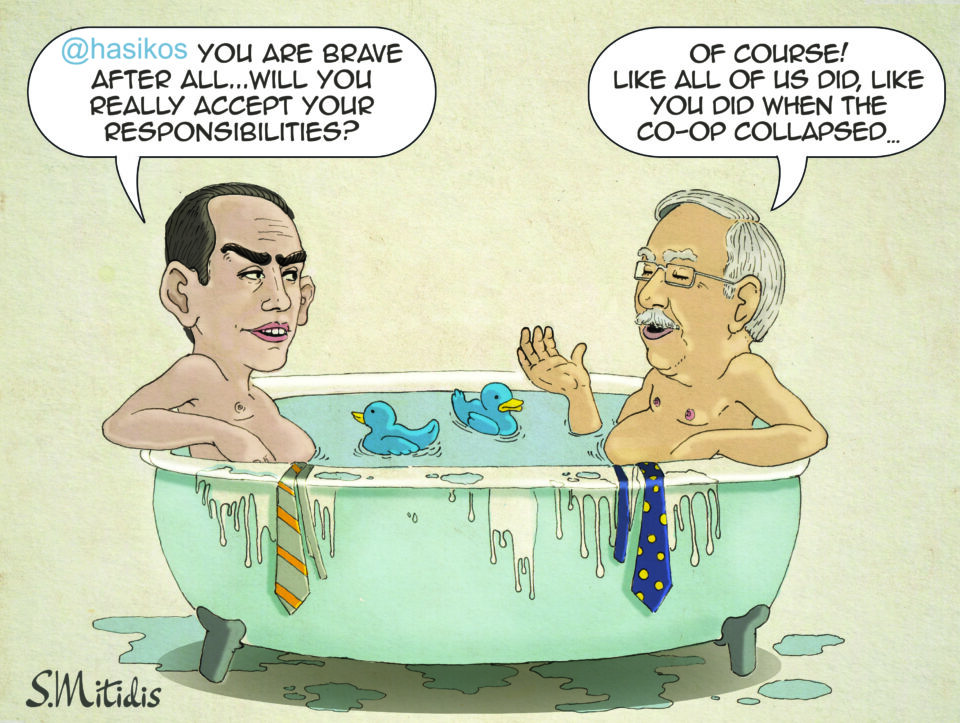 EVERY morning the police issue a report proudly informing us how many people have been fined for committing heinous crimes such as not wearing a face mask on the street or for going to their neighbourhood periptero without having secured SMS authorisation from the state computer.

These are hefty fines of €300 to €500. In the latest fines’ communique issued on Saturday morning, a shopkeeper was fined €500 because he was not wearing a face mask in the presence of a customer, who was also fined for being out after the 9pm curfew.

Between 10 to 11 thousand checks are carried out every day and on average 100 to 130 people are caught violating the decrees. Is it really worth mobilising half the police force, setting up road blocks all over the country in order to catch 100 people for committing minor offences?

Is this just to remind everyone that they are living in a police state, run by unelected scientists-cum-media celebrities who have alarmed the government into following their instructions to fight the spread of the coronavirus?

Just think about what is happening? People are being fined for leaving their house without the State’s permission and there are cops everywhere policing this totalitarian measure, carrying out more than 10,000 checks per day. The state is crushing the human spirit, like the Soviet Union did, in order to protect us from a pandemic that has allegedly killed 183 people, average age 80, out of 30,000 positive cases? If the situation gets worse, decree violators will not be fined but sent straight to prison without trial.

A COUPLE of weeks ago, before the lockdown was imposed, some anti-vaccine nutcase was arrested for being involved in organising a demonstration. The demo was in violation of the decree banning public gatherings and the guy should probably have been fined and sent home, but the cops, illustrating their police state mentality carried out a search of the man’s house.

In what democratic country do you carry out a search of a person’s house because he took part or organised a demonstration? He had no guns or explosives in his possession, so what were police hoping to find in his house? Or perhaps in the pandemic era anyone demonstrating against the vaccine is a threat to the police state. At the house, the police found a gramme of cannabis and three ampules of steroids.

Another example of police heavy handedness was demonstrated the other night. A young woman had absentmindedly got in her car to go somewhere without sending the obligatory SMS for permission. She realised this while driving and stopped to send the SMS. She got her authorisation and drove on but was stopped just a few metres later at a police road block.

The cops, who had seen she had stopped, insisted on checking the time she received the SMS authorisation and when they saw it was only a minute earlier duly fined her, because she left home without the authorisation. On the plus side, they did not carry out a search of her house.

ME TOO has finally arrived in Cyprus with a few years delay. Like the repressive coronavirus measures, it arrived via Greece where Olympic medalist Sophia Bekatorou revealed that she had been raped by a senior official of the Hellenic Sailing Federation in 1998.

This was the spark for Cyprus sports shooter Andri Eleftheriou to repeat the allegations that she had been sexually harassed by a sports official on two sports trips – Melbourne in 2006 and Beijing 2008. Eleftheriou made this allegation in 2018 on a television show and again last month and was completely ignored. She filed a complaint to the police on Wednesday.

The last time a woman went to the police to report a rape, in 2019, she ended up being charged with making false accusations against the rapists, but things may have changed now. Eleftheriou met the justice minister, Emily Yiolitis, who said she was by her side, before going to the police, so the officers might even believe her story.

WHAT the hell has happened to foreign minister Nicos Christodoulides who has recently metamorphosed from a Cyprob hawk to dove? What has made him abandon his multi-faceted, multi-dimensional foreign policy that would upgrade the strategic importance of our super-nuisance nation and make it a regional player able to bring Turkey to its knees?

He has suddenly become the biggest supporter of BBF, which he had been fanatically opposed to for years. The devious Paphite has now struck up friendships with BBF supporters and complains to them that Prez Nik does not want it. This is the same guy that was constantly pestering Nik at Mont Pellerin and Crans-Montana not to do a deal with the Turks (admittedly his boss did not require much persuading).

In fact, it was his idea to leave the meeting in Mont Pellerin, where Akinci had offered the return of Morphou, on the pretext that Nik had to confer with the party leaders. What was there to confer over? Would any party leader have told Nik we do not want Morphou returned? Christodoulides played a similarly destructive role at Crans-Montana, but now he has seen the federation light.

Like any principled opportunist, his support for federation will last as long as he considers it beneficial to his career.

AS A RULE, I have never responded to the comments published below the Coffeeshop’s online edition. I was often tempted when some smart-ass went on a rant based on a complete misunderstanding of what I had written or attributed ulterior motives to me that did not exist, but in the end, I stayed loyal to the dictum, ‘when you dish it out you have to take it.’ (I do not think it was either Walter Scott or Shakespeare that said this.)

I feel obliged to break this rule today, not in order to argue with any of the commenters, but to put the record straight. Below last week’s coffeeshop, there were several commenters stating that the column was being written by someone else and that the “real P has left the stage” that the “original Patroclos has retired”. Others agreed with this speculation and bade the ‘real P’ farewell.

It was all very sweet of them. However, I would like to assure readers, that I am the real P, the original Patroclos, the same person I have always been and I have not retired, left the stage, or have surrogates doing my job, even though I have been tempted on many occasions to give up. But I am addicted to the weekly adulation and abuse I receive from my loyal customers, without which my life would have no meaning.

I have no plans to retire, even though in nine months’ time I will be old enough to go to the supermarket before 10am, because this year the Coffeeshop turns 30. I think only my friend Alecos Constantinides at Alithia has a longer running newspaper column.

SOME commenters arrived at their mistaken conclusion because they felt there was a decline in the quality of the coffeeshop, and instead of surmising that the real P was underperforming or had lost his touch, they assumed he had packed it in.

In a way this was quite flattering, but I should point that anyone can go through a period of bad form, including superstars like Messi and Ronaldo; and the Rolling Stones have produced bad albums, without anyone saying that their songs were written by someone else.

Of course, the Stones have been in decline since the late seventies when they produced their last great album, Some Girls, and it is entirely possible that Patroclos may be suffering the same fate. It might be time to release the Real P’s Greatest Hits, so that fans who are disappointed with the current output have something else to read on Sundays.

Alternatively, disappointed readers that can’t get no satisfaction from reading the Coffeeshop, could apply to be banned from reading it and we will take all necessary steps to satisfy their request.

Our View: The economy must reopen on February 1