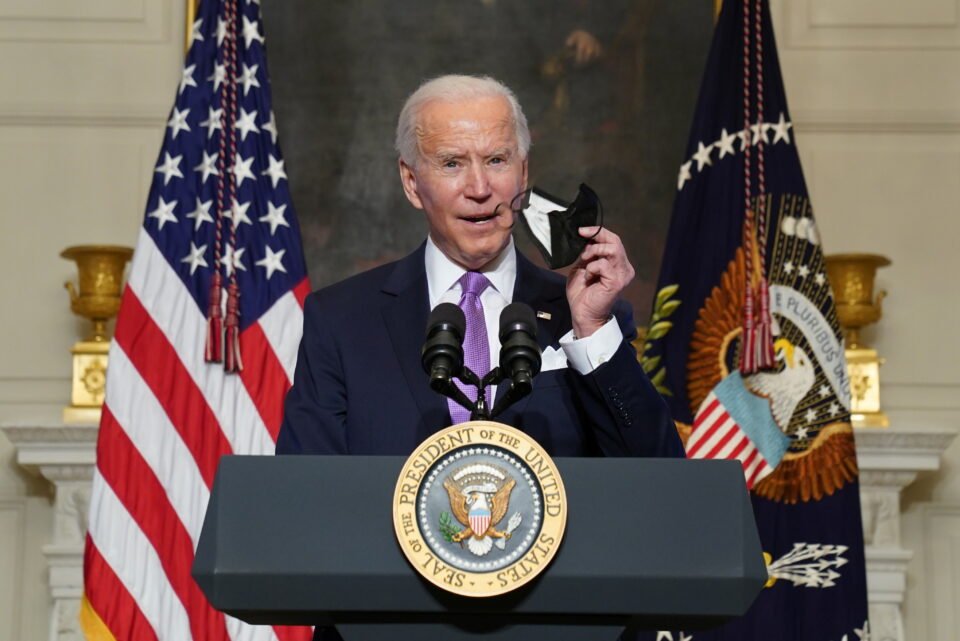 President Joe Biden was set on Wednesday to sign executive actions to combat climate change, including pausing new oil and gas leases on federal land and cutting fossil fuel subsidies as he pursues green policies in stark contrast to those of his predecessor Donald Trump.

The orders map out the direction for the Democratic president’s climate change and environmental agenda and mark a reversal from Trump, a Republican businessman-turned-politician who sought to maximize U.S. oil, gas and coal output by removing regulations and easing environmental reviews.

Biden’s focus on climate change has cheered international partners and environmental advocates, but upset Big Oil, which argues that the moves will cost the United States millions of jobs and billions of dollars in revenue at a time when the U.S. economy has been battered by the COVID-19 pandemic.

The White House said Biden will direct the Interior Department to pause new federal oil and gas leases on public lands or offshore waters “to the extent possible” and review the program’s climate impacts and taxpayer benefits. The pause will not restrict energy activities on lands that the government holds in trust for Native American tribes, it added.

Biden will call for a “rigorous review” during the pause of all existing leasing and permitting practices related to fossil fuel development on public lands and waters, the White House said. Biden also will seek to double renewable energy production from offshore wind and by 2030 and set a goal to conserve 30% of federal land and waters to protect wildlife, also by 2030.

The orders will impact large swathes of land onshore in mostly Western states, as well as offshore drilling acreage located mainly in the U.S. Gulf of Mexico, which combined make up about a quarter of the nation’s oil and gas supply. Word of the measure has drawn criticism from some states that depend on drilling revenue.

Biden will also direct federal agencies to “eliminate fossil fuel subsidies as consistent with applicable law,” according to a White House fact sheet. It was not clear which subsidies could be stripped away under this order, given many of the industry’s tax breaks are congressionally approved.

U.S. special climate envoy John Kerry touted the executive orders during the virtual summit of the Davos-based World Economic Forum on Wednesday, saying they show that Biden has made climate change the “centerpiece of his presidency.”

John Hess, CEO of energy company Hess Corp, said the Biden administration must keep in mind the impacts of its climate change agenda on jobs and energy security.

“They have to realize that oil and gas are a strategic engine for the U.S. economy. … oil and gas play a key role in the economy’s recovery,” Hess told Wall Street analysts.

Abraxas Petroleum CEO Bob Watson separately told Reuters, “In my many years in this business, this is the worst downturn I have lived through, and this is not going to help a recovery. There’s still going to be demand for oil and gas for my lifetime, anyway, and I’m just worried about the impact it will have on the broader economy.”

Biden also faces pressure from liberals in his own party for aggressive action to address climate change. Senate Majority Leader Chuck Schumer on Wednesday called on Biden to declare a national emergency on climate change, calling such a move “a giant step in the right direction” that would let the president tap additional resources to achieve his goals.

The new orders include an announcement that Biden will host an international climate summit on Earth Day April 22, the creation of new climate change positions and an inter-agency task force within his government, and measures to boost government procurement of U.S.-sourced clean energy and vehicles, boost science, and assist communities most affected by industrial pollution.

Biden also will instruct agencies to develop policies to address the disproportionate health, environmental, economic and climate impacts on poor and minority neighborhoods.

Coronavirus: 51 rapid testing sites for Thursday, all those going back to work must be tested