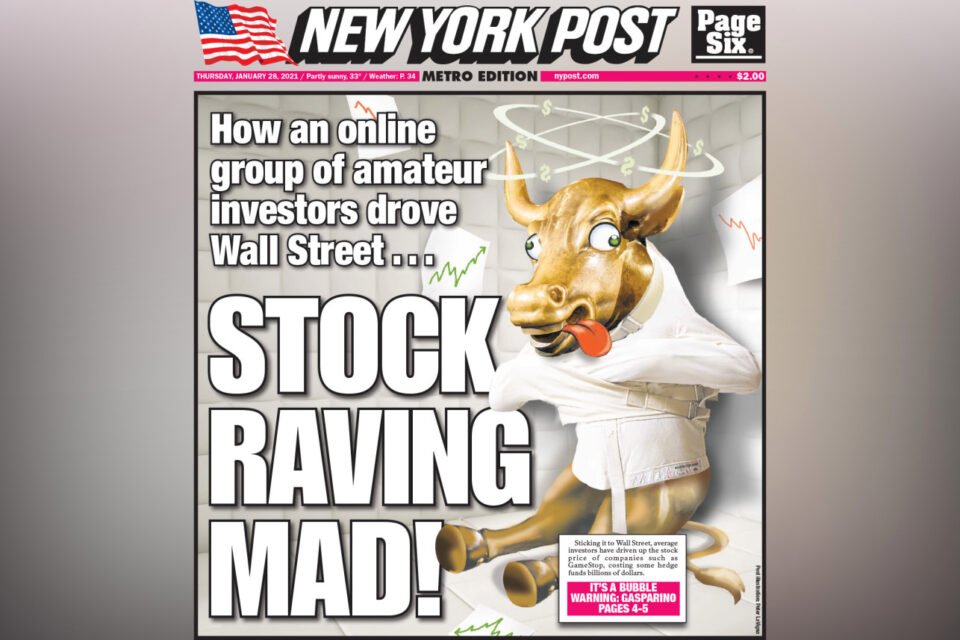 Members of a discussion group on the social news and chat site Reddit (page ‘R/WallStreetBets’) have been able to drive up the stock price of Gamestop by 1,700 per cent. For a time, the Reddit group held Gamestop stock worth billions – one member of the group told CNBC that he was able to pay off all his $24,534 in student loans with the profit.

And this is with a company that is close to bankruptcy.

The mostly Millennial investors have been hyping up GameStop shares, encouraging others on the platform to buy and hold in frenzied drive to raise the price of the stock. The outcome, so far, has been staggering over a four-week period.

The saga is baffling professional Wall Street investors, shaken to the core by the bizarre speculative rally. ‘I’ve been on Wall Street for over 20 years,’ said Anthony Chukumba, a financial analyst working for Loop Capital, ‘and I cannot think of anything that I’ve seen that is nearly as insane as what’s going on with GameStop right now. If you want to gamble, go to the casino, this is not what markets are for.’

GameStop, like many brick-and-mortar retailers, were hit hard by coronavirus restrictions. Already suffering from the move to online sales, the consumer electronics and gaming merchandise chain announced last April that they would be closing 300 stores.

This year, store closures are set to exceed 2020’s, and over the last 12 quarters the company has lost a staggering $1.6 billion. GameStop stock had been consistently on the decline for 6 years, culminating in a paltry low of $3.98 on the July 30.  Six months on, with no substantive improvement in the company’s operations or revenue, the stock sits at $350.

Assuming the role of Goliath, Wall Street hedge funds have sought to profit from unprecedented market movements by shorting the stock – essentially betting that the company will collapse, and price will fall. As the stock continues to defy logic and climb, disgruntled hedge fund managers are losing money. A lot of money.

Just this year, short positions on GameStop have cost investors over $7 billion. Andrew Left, who runs Citron Research, took to YouTube to concede that his bet had resulted in ‘a 100 per cent loss,’ while Melvin Capital, another ‘Goliath’ which bet against the meteoric rise have taken losses ‘in the billions’, with Redditors revealing their plan to leave the fund’s multimillionaire founder Gabriel Plotkin with ‘less than a college student $50k in debt with a part time job at Starbucks’.

Somewhat unsurprisingly, Wall Street’s reaction has been to call foul, beseeching regulators to investigate claims of market manipulation. Nasdaq chief Adena Friedman said in a statement to CNBC that trading could be halted to allow time to investigate ‘if a significant amount of social media chatter could be matched up against unusual trading activity.’

Such allegations have only added fuel to the fire, with retail investors countering that their social-media stock pump is just a more blatant version of the ‘gangster tactics’ that Wall Street has been getting away with for years. ‘It’s the sentiment,’ said Reddit co-found Alexis Ohanian in a tweet on Wednesday, ‘the public doing what they feel has been done to them by institutions’.

US Senator Elizabeth Warren waded in with an announcement yesterday, as she described how for many years ‘wealthy investors have treated the stock market like their own private casino’, adding that it is high time the SEC and other regulators ‘wake up and do their job’. The issue has even garnered attention from the White House, who claim to be monitoring the situation.

Does any of this make any sense? Not really, but then again, it can’t be much less sensical than the stock market sitting near record highs at the same time as millions are struggling to feed their families.  As one Redditor aptly put it, ‘hate the game, not GameStop’.

Speed limit being reduced to 30km/h on some city streets