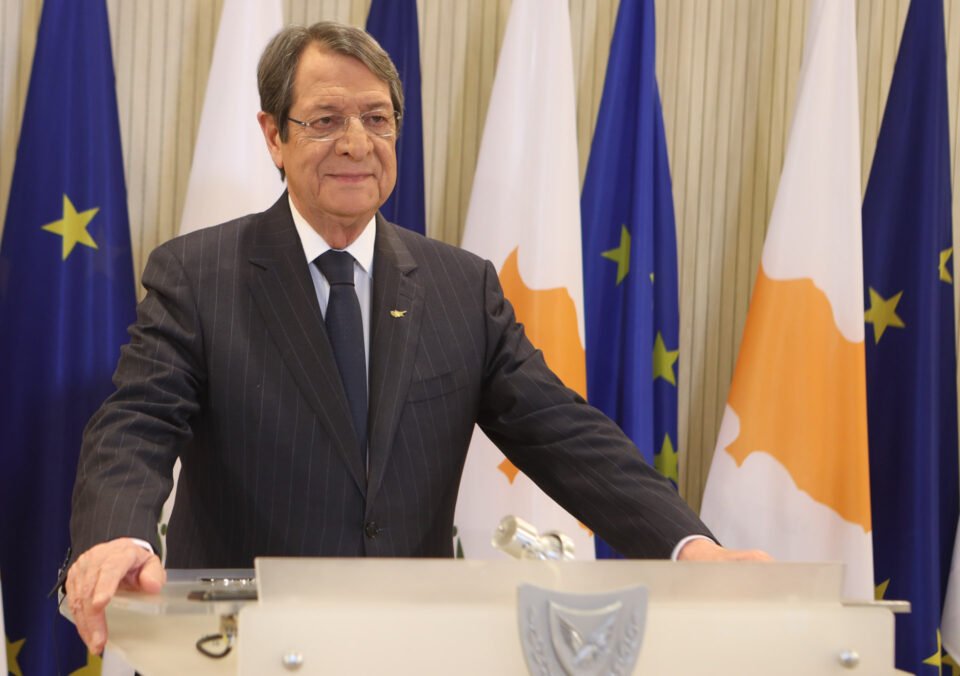 EVERYTHING he does to wriggle out of the problems he has created for himself ends up causing him more trouble. He could have lost his touch, his political craftiness might no longer work or he may have simply run out of luck, which he has enjoyed in bucketloads for years. Whatever the reasons, everything he does now backfires, leaving him with more egg on his face than before he engaged in his clumsy damage-limitation efforts.

As one metrios drinker pointed out during a heated discussion in our establishment this week, Prez Nik has developed quite a talent for making the wrong call. When the Al Jazeera passports story went viral, Nik could have ridden the storm by giving 40 or 50 citizenship files to Odysseas to investigate and that would have been the end of the story.

Instead he refused to give him any allowing opposition parties to mount a major offensive, accusing him of trying to cover up shady dealings in which his law office may have been involved and claiming that Odysseas was the only person morally fit to investigate. To silence them, he asked the AG to order a full investigation of the citizenship scheme, from 2008, that will result in some 2,000 files being handed over for scrutiny.

Meanwhile, everyone appearing before the committee, including his serving or former associates, understandably, is looking to protect his own ass and making revelations that expose more of the shabbiness with which the scheme was handled by the government. To make matters worse, the investigative committee’s sessions are now open to the public, ensuring we miss none of what is said.

ARCHBISHOP Chrysostomos appeared before the investigative committee on Tuesday and among other things said he had told the Prez that we must look after our economy. To have a robust economy and be able to buy “modern military equipment,” he told the Prez, “we must all stop stealing and I include myself.”

He tried to patch things up, appearing on the CyBC television news that night and saying he had been misunderstood. “We know what is going in Cyprus,” he said. “What I meant was that both the president and I must use our weight to persuade those that are stealing that they must stop.”

It is not the first time Chrys had embarrassed Nik in public. Last month he revealed the Prez had on several occasions told him he preferred a two-state solution causing the presidency to claim the Archbishop had misunderstood. The presidency did not issue a statement about the Archbishop’s plea to Nik to stop stealing realising it might not be such a good idea.

GIVING a televised address to the nation about corruption was another example of Nik’s poor judgment. If he was known to listen to anyone, you could blame his advisors for this monumentally stupid decision, which was a gift to Akel and Diko as it kept their campaign against government corruption as the main news story for a few more days.

Nik, who could be quite an orator at times, actually thought he could persuade TV audiences to feel sorry for him because he was the victim of vicious gossip and the dirt-producing industry intent on harming his “moral stature, prestige and dignity.” He had tolerated this unprecedented attempt to vilify him for months, he said.

Impressively, he quoted Joseph Goebbels – “If you tell a lie big enough and keep repeating it people will eventually come to believe it” – to explain how he had been a victim of Nazi-like propaganda. Another famous quote that came to mind listening to the Prez’s address is from Hamlet: “The lady doth protest too much methinks.”

“THE PHENOMENON of corruption has plagued the Cyprus Republic since its establishment,” said the Prez in his address, giving yet another exhibition of how he makes things worse for himself. If it had been around since 1960 why has he done nothing about it in the eight years he has been in office, only acknowledging its existence now when he is on his way out?

Why had he not called all the thieves and persuaded them to stop stealing as the Archbishop had advised during his first term and waited to grapple with the problem now that he has only two years left? 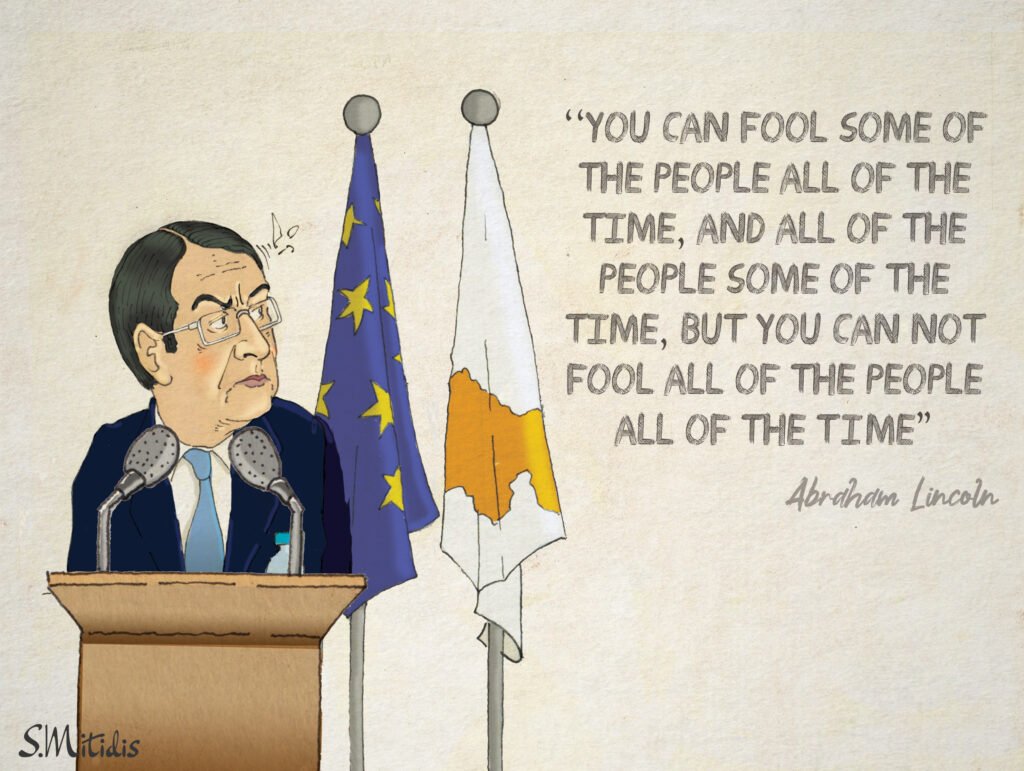 THE DAY after the address, the victim of propaganda turned corruption-buster gave a news conference with Justice Minister Emily Yiolitis to present all the policies and laws the government will pursue to eliminate corruption and take Kyproulla to the top of Transparency International’s global Corruption Perception Index (CPI).

In the latest index, published on Thursday, we dropped nine places to 42nd with a score of 57 out of a hundred points which is not too bad considering 180 countries are evaluated and top mark for the least corrupt – Denmark and New Zealand – was 88. If we are still in the top half of the table after the golden passports fiasco we can’t complain.

Yiolitis announced so many measures it would be a miracle if the government manages to implement a fraction of them before Nik leaves office. Nik underlined his corruption busting commitment by bombarding us with measures. The only thing the government failed to announce as part of its fight against corruption was the return of the death penalty.

THERE is no space to go into the measures which Nik and Emily, displaying a sense of humour, or lack of touch with reality or both, have urged the political parties to help implement. What is the probability Akel and Diko which have stumbled on a winning formula – slamming the government about corruption daily – would help eliminate the problem that is winning them votes at a time when their popularity is at rock-bottom?

Of course the crafty Nik has found a way to lure some parties to his side. As Yiolitis informed us there is already a bill for the establishment of an Independent Authority against Corruption and there are plans to set up a National Integrity Service, which seems a bit of a joke considering integrity is quality that has always prevented career advancement in the public sector.

Positions on these bodies will be distributed among members of parties that will join the government’s noble cause, but this should in no way be construed as a form of corruption.

PREZ NIK may have thought he was acting chivalrously in coming to the defence of Yiolitis during the news conference that followed the presentation of the measures but it showed that he has not come to terms with the times.

Yiolitis was asked if she would step down after the Supreme Court ruled that the search warrant used to enter the home of a woman suspected of running the parody Yiolitis account should not have been issued by the district judge. The minister had complained to police about something posted on the ‘Lady Emily Kardashian Duchess of Yiolou’ site and the cops secured a warrant and barged into a woman’s home who had nothing to do with the account.

Yiolitis was asked by a hack whether she would step down for alleged abuse of power. Nik did not let her respond, expressing his full backing for her and when the hack insisted the minister reply became angry. As a feminist I would consider Nik’s behaviour rather sexist – did he consider Yiolitis a weak, defenceless woman that could not stand up for herself and answered on her behalf, protecting the weaker sex like some benevolent uncle?

THE HEALTH ministry junta did not like the barrage of criticism it came under after keeping most restrictions in place on Friday and issued an announcement on Saturday telling us we should count ourselves lucky because Kyproulla is among the few EU member states that is de-escalating Covid measures.

The ministry did not mention that Kyproulla is the only EU member-state in which citizens are locked up in their homes and need authorisation from the junta to go out, for reasons specified by the junta, and only twice a day. And it is also the only EU member-state which has a curfew from 9pm. Greece, which we copy these police state measures from, is more liberal even though it has three times Kyproulla’s Covid mortality rate. In Greece people can leave their home six times a day via SMS and the curfew starts at 11pm.

But the health ministry wants us to show gratitude that it is de-escalating measures albeit at a glacial pace. Perhaps the government’s mean Covid enforcer Health Minister Constantinos Ioannou should issue a decree obliging us to say ‘thank-you for de-escalating measures’ in the SMS, as a condition for the junta giving us permission to go out.

I WAS DISGUSTED watching Ioannou like some nasty generalissimo informing people that the mountains were out of bounds, because last weekend too many people gathered in Troodos square. This weekend the junta set up police roadblocks on all roads leading to Troodos to emphasise the de-escalation of Covid measures. Citizens were naughty last weekend and the strict and unforgiving generalissimo decided they must be punished.

THE PEP list was finally released on Friday but our ambassador to Athens and former education minister Kyriacos Kenevezos issued a pre-emptive statement out of the blue on Monday. In his statement he listed the three loans he had with BoC, Altamira and Hellenic, totalling about €390,000. All loans were “fully serviced, without any arrears,” he said.

The ambassador knew that he would be on the PEP list – his loans on the list were in the region of €900,000 – and decided to stop the gossip. Kenevezos was a former Diko deputy and godson of the late Tassos, who was very well-rewarded by Nik for leaving the party.

It is said that one of the reasons he was appointed ambassador to Greece was because the 90K annual salary would help him repay his loans. This was why after he completed four years as ambassador in 2018 (the maximum stay for an ambassador) the council of ministers took the unprecedented decision to renew his posting for another four years, presumably so the loans can carry on being repaid.

Our View: Grandiose corruption plans but can they be implemented?