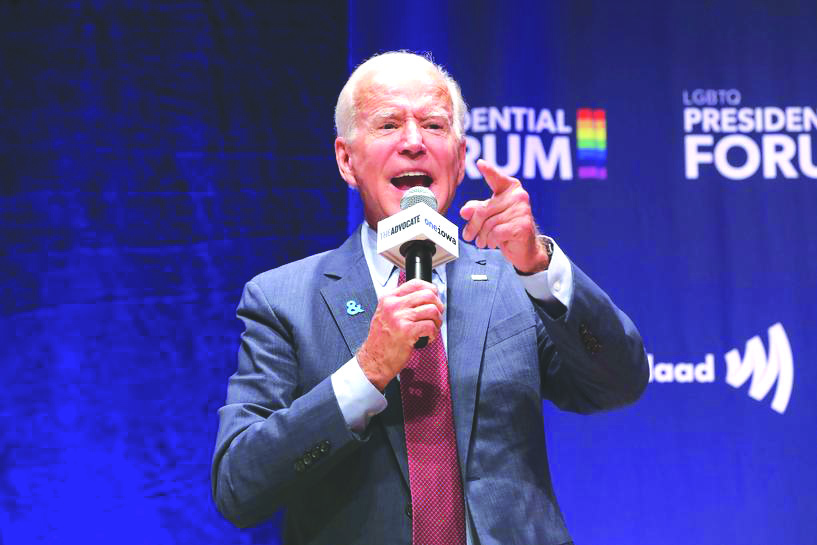 On Jan. 25, Biden also signed an order reversing a Trump-era ban that barred trans Americans from joining the US military

Montana has become the latest conservative U.S. state to advance legislation concerning transgender rights, joining more than a dozen other states pursuing laws that appear to be at odds with the pro-LGBT+ policies of Joe Biden’s White House.

Within hours of taking office on Jan. 20, Biden moved to allow equal transgender participation in school sports, an issue that has exposed a growing divide between more liberal and conservative parts of the country on LGBT+ rights.

“Children should be able to learn without worrying about whether they will be denied access to the restroom, the locker room, or school sports,” Biden wrote in an executive order.

On Jan. 25, Biden also signed an order reversing a Trump-era ban that barred trans Americans from joining the U.S. military.

But while Biden has vowed to advance equity across the country, 26 trans-related bills have been introduced in state legislatures since Jan. 1, many seeking to stop trans athletes competing in women’s sports competitions.

The Montana House of Representatives on Jan. 25 gave the green light to a proposed ban on trans girls in school sports teams but the next day killed a bill that would stop doctors providing advice and care on issues specific to trans youth.

The sports bill needs to be passed by the Montana Senate and signed by the governor of the northwestern state to become law.

Lawyer Chase Strangio at the American Civil Liberties Union (ACLU) said the bills that had been launched in 16 U.S. states were likely being funded by well-resourced organizations “that can find witnesses, draft the bills, move them through.”

“(This means the groups) can facilitate quick action in state legislatures that are otherwise potentially somewhat overburdened as a result of the pandemic,” Strangio said.

In the United States, school sports, particularly for girls, have become a flashpoint between trans activists and some religious and conservative groups in recent years, mirroring a debate in the wider sporting world.

While one side wants equal participation, the other argues female trans competitors have an unfair physical advantage.

Barbara Ehardt, a state representative from the neighbouring state of Idaho who drafted the bill at the basis of Montana’s sports legislation, said the measure “was strictly a desire to preserve opportunities” for women. She said it had nothing to do with impeding people’s transitions.

“I know that we physiologically cannot compete against the inherent advantages of a biological male athlete,” said Ehardt, whose bill last year made Idaho the first state to ban trans competitors from women’s sports in schools and universities. The law was immediately challenged in court and has not been enacted.

LGBT+ activists, however, have voiced concerns that measures to limit trans involvement in school sports are part of a drive by conservative states to roll back trans rights nationwide.

So far in 2021, 26 trans specific bills have been introduced in 16 states, according to a legislative tracker from Freedom for All Americans, an LGBT+ rights organization.

“I’ve been focused on lobbying on anti-trans bills for six years and this has already proven to be the worst session we’ve seen in terms of volume and content of the bills,” Strangio told the Thomson Reuters Foundation.

He said Alabama and Mississippi, both with Republican majorities and Republican governors, could soon follow Montana as both states have reintroduced bills that failed last year.

The ACLU has pledged to mount legal challenges against all of the proposed bills for violating the Constitution.

While the focus of many of the recent bills is to stop trans girls from competing in single-sex sports at school, others seek to prosecute doctors who provide medical care to children questioning their gender identity.

One Mississippi proposal would ban people aged under 21 from being prescribed puberty blockers – which pause sexual development to treat gender dysphoria – or hormone replacement therapy.

Others in Alabama, Missouri, Utah and more seek to prohibit these treatments up to the age of 18.

This year’s flurry of trans-related bills reflects a long-running battle in the United States between some Christians and other conservatives and LGBT+ rights activists.

One of the country’s most influential Christian legal interest groups, the Alliance Defending Freedom (ADF), is a leading backer of legislative efforts to bar trans competitors in school sports.

“ADF has a consistent record defending fairness for women and girls, and is ready to do so in the future,” said ADF’s legal counsel Christiana Holcomb.

“Nothing in the constitution requires a state to abandon fairness for girls in order to give special treatment to males who want to compete in girls’ sports.”

The ADF did not respond to further enquiries as to its overall position on trans rights.

The showdown over trans rights has been played out in other countries too amid a global debate about participation in sports and the age at which a child can choose to transition gender.

In December, England’s health service said children under 16 would need a judge’s approval to access puberty blockers after a court ruled they could not give informed consent to the drugs.

In the United States, the debate over trans rights has been defined by entrenched divisions between more liberal and conservative parts of the country.

But with the Biden administration set to become “the most LGBTQ-friendly and progressive in our nation’s history”, Kevin Jennings, chief executive of LGBT+ rights organisation Lambda Legal, said many expect the culture war between liberals and conservatives over trans rights to intensify.

“Politics will definitely be marked in the Biden years by the culture wars,” said Andrew Hartman, professor of history at Illinois State University. “That’s just where we are.”

Coronavirus: Workers returning to work to be tested alphabetically