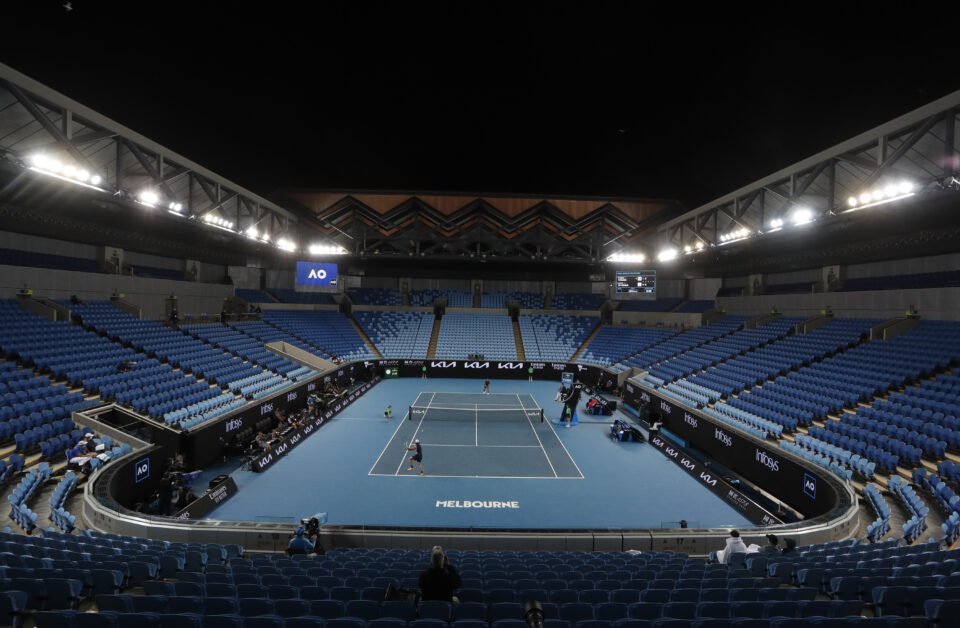 General view of empty seats at the Australian Open

As boisterous crowds made way for deafening silence at the Australian Open on Saturday, players did not have to do too much adjusting as they abruptly switched back to the “new normal” of the COVID-19 pandemic.

Victoria, of which Melbourne is the capital, entered a five-day lockdown on Saturday to contain a COVID-19 outbreak. Authorities allowed the Australian Open to continue but without the presence of fans.

Players were back to travelling between their residences and the site of the year’s first Grand Slam as per requirements of a biosecure “bubble”, similar to the way they have competed since tennis restarted last August after a five-month shutdown.

For the first five days, the Australian Open, despite its reduced capacity, had transported the sport back to pre-pandemic times with fans in the stands – unlike the last six months when just a spattering of them were allowed at a few tournaments.

While the experience was short-lived and Melbourne Park turned mostly desolate on Saturday, it was business as usual for the sport.

“I don’t think it changes the dynamic of the tournament too much because the players are shut off, they are in a bubble anyway, so for them not much will change,” said Barbara Schett, the former world number seven and an Eurosport pundit.

Last year’s U.S. Open Grand Slam was played in front of empty stands, the French Open allowed up to 1,000 fans daily at Roland Garros while most of other events on the professional circuit kept the public out of the stadiums.

Seven-times Grand Slam winner Mats Wilander did not believe that lack of fans would impact quality of play.

“That’s what I was most proud of in 2020 during the pandemic … you could not tell the difference in the players – they were behaving the same way,” said Wilander, a Eurosport pundit who was a three-time winner at Melbourne Park.

“I didn’t see any change in body language from anyone.

“The intensity is there, the players are used to it and I think we are learning that – yes, they enjoy the crowd of course, but they don’t need the crowd to play their best tennis. At least, not the majority of players.”

Greek player Stefanos Tsitsipas is one of those who enjoy the vociferous support from the stands at the Australian Open with the presence of the huge Greek community in Melbourne.

“I don’t know if the crowd would make it any different. My game was there, and that’s the most important thing for me,” the 22-year-old said after an easy win on Saturday. “It’s all in the head. It’s only mental.”

Women’s world number five Elina Svitolina finds it easier to focus when there are no fans but said the mind could wander off for a player who is trailing in a match.

The campaign ended on Friday for home hero Nick Kyrgios, who considerably raised the decibel levels at Melbourne Park during his three rounds, before the stands were vacated.

“It would have been tough for me, I think, playing with no crowd,” he said.

“I think sports is entertainment at the end of the day, and I want to be able to play in front of full crowds around the world.”

Why pain is an unhealthy driver of self-development