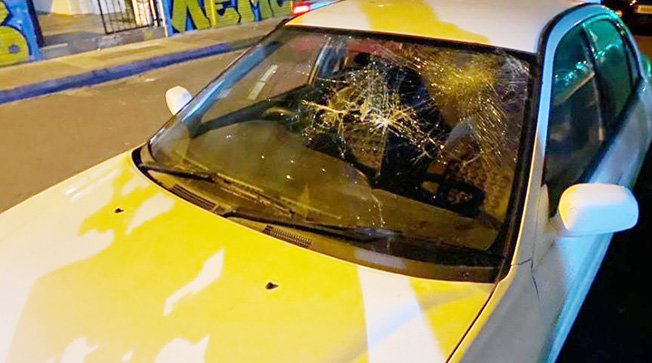 According to local residents and videos, the two groups clashed using rocks, handheld flares, flare guns, smoke bombs and other projectiles, resulting in damage to private properties and cars parked in the area

It all started on Friday, at Apollon’s basketball court in Limassol, where Apollon’s wheelchair basketball team had been in the middle of a training session.

During that session, a number of AEL fans entered the court with the intention of stealing one of Apollon’s banners, which was hanging behind one of the baskets.

According to the club, the invading AEL fans resorted to violence and other acts of aggression in their attempts to steal the banner.

“We condemn the cowardly attack of a portion of AEL fans at our basketball court during a time when the only people present were handicapped basketball players in wheelchairs”, said an Apollon club statement.

“This heinous and reprehensible move disrespects all sane fans and is a black spot in the sports history of our city”, the statement added.

A day later, on Saturday, Apollon fans sought retaliation by attacking the AEL supporters’ club (Syfael) in the Enaerios area in Limassol.

The incident, which was first reported between 18:00 and 19:00 on Saturday evening, necessitated the involvement of the police force.

According to local residents and videos, the two groups clashed using rocks, handheld flares, flare guns, smoke bombs and other projectiles, resulting in damage to private properties and cars parked in the area

Moreover, Cypriot police reported that a local 49-year-old resident was injured after being hit on the head by a rock.

On Sunday, Apollon released another statement condemning what had taken place the day before.

“Apollon Limassol and its fans strongly condemn the tragic events of violence that took place in our city in the last 24 hours”, the statement said.

“These events have no place in a city that can be proud of the culture, ethics and education of its inhabitants”, the club statement added.

“We call on the Limassol fans to show mutual respect and enjoy this celebration of football the way it deserves to be celebrated”, the statement concluded, referring to the Monday night football game between Apollon and AEL (7pm).

Unfortunately, a third incident took place only a few hours after this statement.

In response to the attack in the Enaerios area on Saturday, a group of AEL fans attacked the Apollon fan club in the Agios Antonios area, located in the old Turkish Cypriot area of old town Limassol, close to the marina.

The group of masked and hooded AEL fans stormed the old building housing the Apollon fan club, shouting that everyone should leave because it will be burned.

In footage released online, the AEL fans can then be seen placing wood palettes inside the building and starting a fire by throwing molotov cocktails.

The fire department was then called to the location and arrived at around 5pm.

While the fire was eventually put out by the fire department, there has been extensive damage to the interior of the building.

A few hours later, AEL and Apollon released a mutual statement, condemning the attack and urging fans to de-escalate tensions before something even more severe and tragic occurs.

“Together, the administrations of AEL Limassol and Apollon are watching with great sadness, disappointment and shame the tragedies that are happening over the past few hours in our city between a group of “fans” of the two teams, if they want to call themselves that, who only succeed in hurting and insulting the prestige and history of the two clubs as well as a city with culture and history”, the statement read.

“In almost all the families of Limassol there are supporters and fans from both teams, and this in itself should be a point of respect among the specific “fans”. We are absolutely sure that the vast majority of the fans of these two historic clubs are against such vicious and uncivilised behaviour”, the statement added.

“We call on everyone immediately to stop these dangerous actions before it is too late and before we mourn victims in our own homes”, the statement concluded.