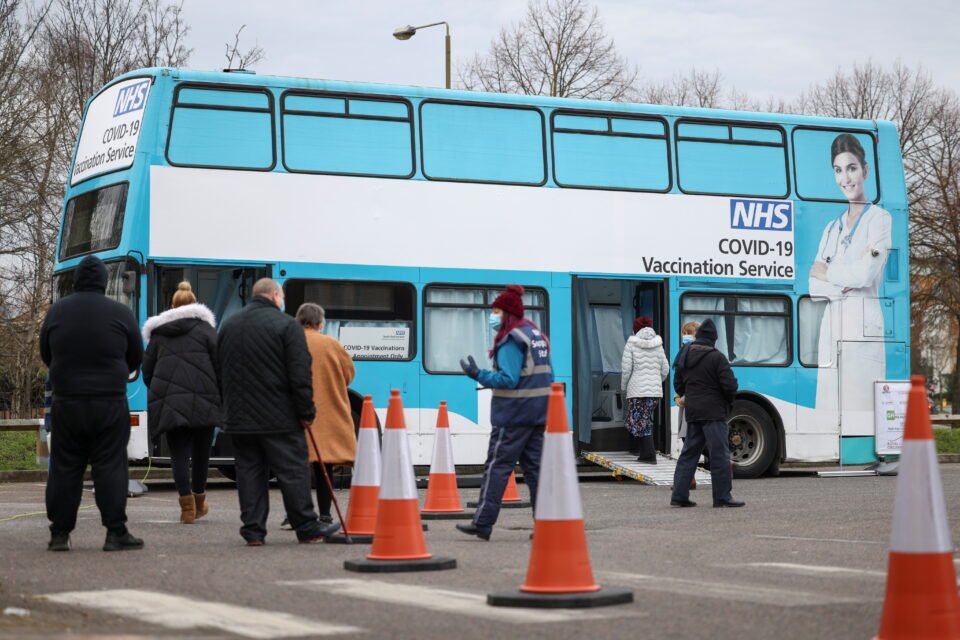 People queue outside a bus modified into a mobile vaccination centre for the coronavirus disease (COVID-19), in Thamesmead, London, Britain, February 14, 2021. REUTERS/Henry Nicholls

British Prime Minister Boris Johnson said on Monday he would plot a cautious but irreversible path out of the COVID-19 lockdown this week after the vaccination of 15 million vulnerable people.

With nearly a quarter of Britain‘s population now inoculated with a first dose of a COVID vaccine in a little over two months, Johnson is under pressure from some lawmakers and businesses to reopen the economy.

“We’ve got to be very prudent and what we want to see is progress that is cautious, but irreversible,” Johnson told reporters. “If we possibly can, we’ll be setting out dates.”

Johnson, due to set the path out of lockdown on Feb. 22, said rates of infection were still high and too many people were still dying.

Speaking later from Downing Street, Johnson said there was not yet enough data about how vaccines were affecting the spread of COVID-19, though data from Israel, currently the world leader on vaccination, was promising.

“If you look at the data for example from Israel, you actually can see the effect, in the UK we can calculate an effect but it’s much better when we can actually see it, when it’s big enough to actually be able to see,” the government’s chief medical adviser, Chris Whitty, said.

Whitty also said that there were several variants which appeared to slightly reduce the effectiveness of currently available vaccines.

Johnson said he would do everything he could to ensure that schools reopened on March 8.

If many people get infected, there would be a high risk of mutation in the virus and higher risk of it spreading to older and more vulnerable groups, he said.

The biggest and swiftest global vaccine roll-out in history is seen as the best chance of exiting the COVID-19 pandemic, which has killed 2.4 million.

Britain has the world’s fifth-worst official death toll – 117,396 – after the United States, Brazil, Mexico and India.

Britain has vaccinated 15.3 million people with a first dose and 539,630 with a second dose, the fastest roll-out per capita of any large country. Hancock said he expected vaccine supplies to increase as manufacturing accelerated.

An influential group of lawmakers in Johnson’s Conservative Party is urging an end to the lockdown as soon as the most vulnerable nine groups are vaccinated. They want no more rules beyond May 1.

“We’re all filled with sorrow for the people we’ve lost, the harms that we’ve suffered but we don’t honour those we’ve loved and lost by wrecking the rest of our lives,” lawmaker Steve Baker said. “We’ve got to find a way to rebuild our society and our economy and our prospects, our livelihoods.”

Britain is speaking to other countries about giving its citizens certificates showing they have been vaccinated so that they can travel abroad in the future to countries that require them.

“That’s going to be very much in the mix, down the road I think that is going to happen,” Johnson said.

“What I don’t think we will have in this country is, as it were, vaccination passports to allow you to go to the pub, or something like that.”

Johnson said Britain would ensure mass vaccination and rapid testing for nightclubs and theatres rather than demanding certification for normal life.

US reassures Turkey over executions after Erdogan calls response ‘a joke’