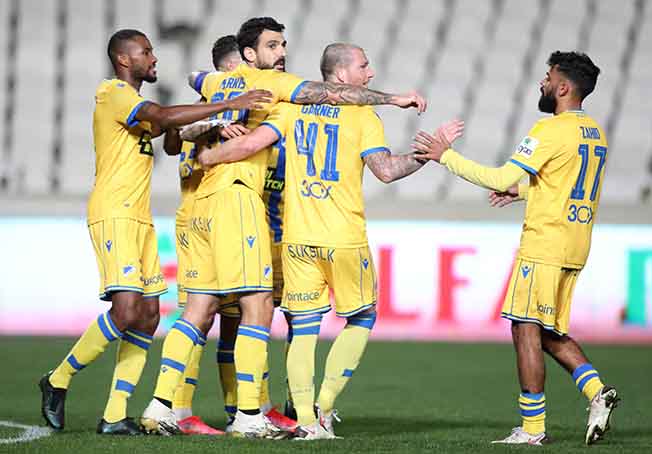 Make mine a treble: English forward Joe Garner starred for Apoel against Salamina

Apoel rose up the table after their 3-1 victory against Salamina on Sunday evening, with English forward Joe Garner netting a hat-trick after an impressive display.

Garner scored his first goal in the 14th minute when Viktor Klonaridis low cross was deflected towards him inside the penalty area, before thumping it into the top right-hand corner.

Garner grabbed his second in the 43rd minute by heading home after meeting a well-taken Tomás De Vincenti free-kick.

The Englishman secured his hat-trick in the 52nd minute. Kloranidis dribbled down the right flank before finding Ghayas Zahid with a low pass just outside the penalty area.

Zahid needed just one touch to flick the ball to Garner who was waiting on the inside left of the penalty area.

Garner cut onto his right foot before squeezing the ball towards the far right corner of the net despite a small deflection.

Apoel are now in seventh place, just one point off the top six, although one of Pafos and Doxa can overtake them if the game between the two sides on Tuesday doesn’t end in a draw.

Speaking to Cypriot outlet Kerkida, former Apoel manager Mick McCarthy said that Joe Garner was a key signing for him at the Nicosia club.

“He was fantastic for me at Ipswich and was the first player I wanted to sign for Apoel”, McCarthy said.

“All fans love a good goal scorer and I expect a lot more goals will follow from Joe”, McCarthy added.

McCarthy also assured fans that Jack Byrne will also prove to be valuable to Apoel, calling the midfielder the ‘best player of the Irish championship’.

Elsewhere on Sunday, Karmiotissa lost 3-0 at home against Olympiakos, all but confirming relegation for the club. Karmiotissa are now in last place, eight points away from safety.

Olympiakos’ win has lifted the club into the top six, a testament to the improvement in the club’s recent form resulting in a tally of seven points over the past four games.

On Saturday, Omonia beat Ermis 0-2 away from home to go top with 53 points. Apollon, who are now second with 51 points, can retake first place if they beat third-placed AEL on Monday evening.

India to ship vaccines to Canada as diplomatic tension eases