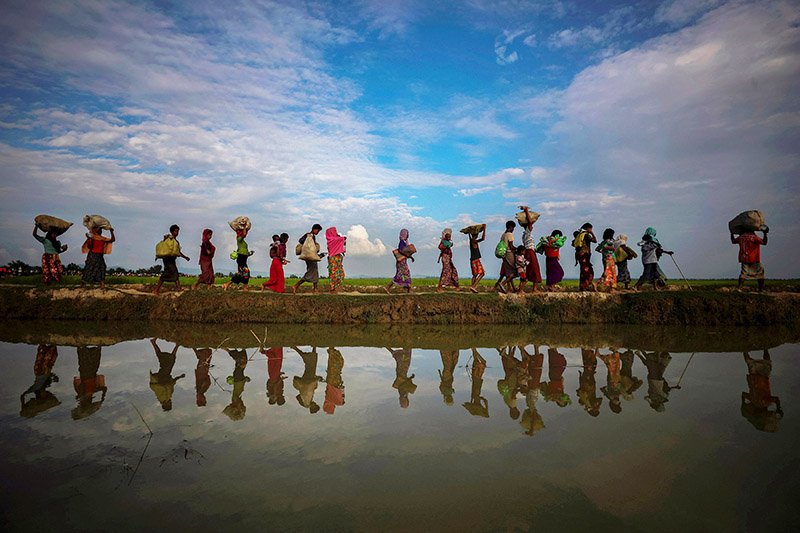 Rohingya refugees are reflected in rain water along an embankment next to paddy fields after fleeing from Myanmar into Palang Khali, near Cox's Bazar, Bangladesh November 2, 2017. REUTERS/Hannah McKay/File Photo

There is a powerful altruism about being human. Certainly there are selfish blighters about but, for the most part, people are generally prepared to help others be they close family or distant sufferers from starvation. In short, people are kind and generous.

This kindness even extends to such philanthropic ideals as animal rights. I mean at a far higher order than just being nice to stray cats or being against any kind of wanton cruelty to dumb creatures.

These unselfish attributes, however, propel us headlong into another bigger and far more serious set of problems. They all depend upon how you view the world and our place in it.

There are, broadly speaking, two ways in which we can regard the situation, some might call it plight, of the human race here on this planet. Some see us as being on Spaceship Earth. According to this persuasion we are all flying through space on a vast spaceship. It has all the facilities we need – food, warmth, protection – and we all receive from its quartermasters whatever we need to live.

There is an alternative viewpoint. Just as many other people see us as precarious survivors in a vast and hostile universe protected only by the facilities available on this pitifully small Lifeboat Earth on which we are fortunate enough to be passengers.

There is no false dichotomy here. As I see it there is no middle ground. The two options are mutually exclusive.

The people on the spaceship are well protected. They have pretty much what they need throughout their life’s journey. They enjoy freedom to live, work and earn if they wish to better themselves. They have unrestricted rights politically. They are equals under the law. They have religious freedom, too, and if they adhere to Biblical dictum they are free to be fruitful and multiply.

Things are inclined to be a shade tougher on the lifeboat,  not quite so free and easy. Things require careful rationing. But, with a bit of luck they have a decent chance of survival.

But let’s stop there for a moment and think. As we pull away from whatever disaster got us into this mess we see that there are many other survivors in the water. They want to come aboard and share whatever there is. And here’s the dilemma. Do we pull away and ignore the screams however heart-rending? Or do we pull on board as many as we can, thereby overloading the boat, having to reduce rations to below survival levels and risk sinking, in which case there will be no survivors?

It is here that Dickenson’s first law of lifeboats comes into play, ‘Thou shalt not exceed the carrying capacity for, verily, altruism must have limits.’

In a calm and routine state of affairs an innate generosity and wish to share is laudable. But when the chips are down it is equally arguable that a thoroughly rational individual can deny he has any obligation to make sacrifices for the future.

At the present time the Ostrich Factor in the form of universal political myopia is enjoying prevalence. Idealism seems to be the rule though it is manipulating our view of how the world should be and should be run.

I suggest that there is a need to re-think this lofty intent. It is currently considered good form to speak politely of religious adherence. So be it pro tem, but, as for scripture one might suggest respect it by all means but don’t bother reading it. Above all, don’t read it thoughtfully. Unthinking fecundity must eventually fail due to the physical and mathematical impossibility of long-term exponential growth on a finite planet. Not even the richest nations are immune.

Philosopher Garrett Hardin offered his first law of economics as: ‘We can never do merely one thing. Any intrusion into nature has numerous associated effects, many of them unpredictable.’ This rather zen viewpoint reminds that, for example, if you spend millions feeding starving illiterates in Somalia in 20 years time there will be even more millions to feed from the still further depleted world supplies. Sooner or later everyone will be equal and will have the same as everyone else, which is not enough. Ultimate harm has been the product of good intentions.

Nowadays the state provides for children and supports overbreeding and obesity as fundamental human rights, but unqualified reproductive rights without any control is, ultimately, unsustainable. Economics, as a discipline, can be as much about mythology and ideology as about real science.

There is no-one on earth more dangerous than a shallow-thinking compassionate person.

Dutch government races for plan B to uphold curfew