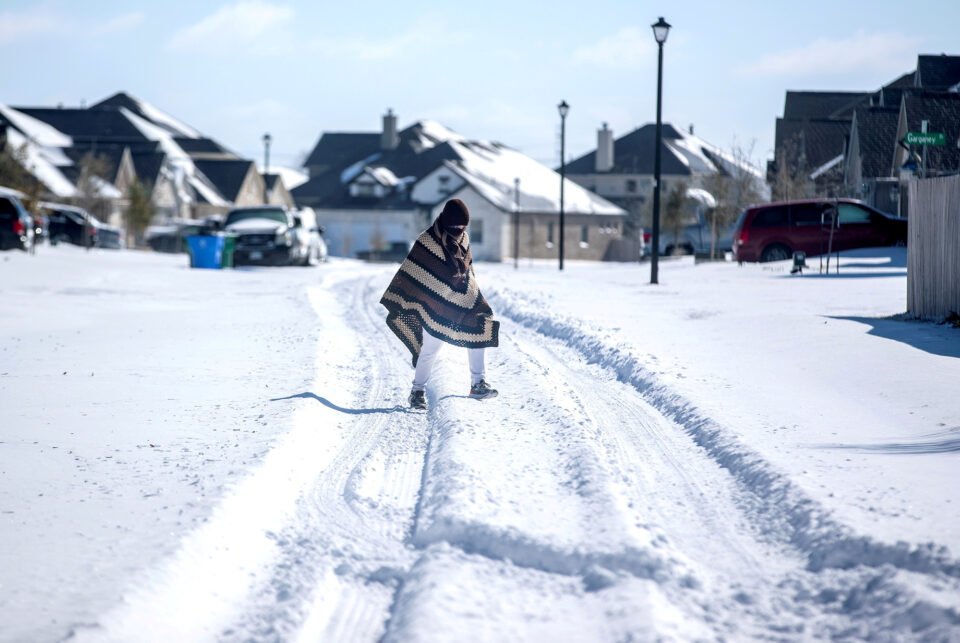 FILE PHOTO: A man walks to his friend's home in a neighborhood without electricity as snow covers the BlackHawk neighborhood in Pflugerville, Texas, U.S. February 15, 2021. Bronte Wittpenn/Austin American-Statesman/USA Today Network via REUTERS/File Photo

Texas officials warned of “disasters within the disaster” of historic cold weather that left millions without heat for a third day on Wednesday, telling residents to prepare for energy to not return until the weekend.

Residents in over 100 counties in Texas have been told to boil their drinking water as treatment plants continue to suffer from energy blackouts, officials said. Upward of 12 million people in the state — the country’s second largest with a population of roughly 29 million — have either have no drinking water on tap in their homes or have drinking water available only intermittently.

Energy remains out for 2.7 million households, officials said. With freezing temperatures expected through the weekend, getting the lights back on will be a slow process, as the state has lost 40% of its generating capacity, with natural gas wells and pipelines, along with wind turbines, frozen shut.

As Texas oil producers and refiners remained shut for a fifth day Governor Greg Abbott directed Texas natural gas providers not to ship outside the state until Sunday and asked the state energy regulator to enforce his export ban.

“That will also increase the power that’s going to be produced and sent to homes here in Texas,” Abbott said at a news conference Wednesday.

The ban prompted a response from officials in Mexico, which relies on imports via pipeline from Texas. More than 40% of U.S. natural gas exports come from Texas.

Hospitals in Houston, the state’s largest city, and elsewhere in Texas have reported they have no water. Nearly two dozens deaths have been attributed to the cold snap. Officials say they suspect many more people have died – but their bodies have not been discovered yet.

On Wednesday evening, officials told residents in the most populous parts of the state to brace for another round of freezing rain and snow in the next 24 hours.

The cold forced some residents to choose between staying in dark and cold homes, some with frozen or broken water pipes, or face possible COVID-19 exposure at local relief centers.

“This is in many ways disasters within the disaster,” said Judge Lina Hidalgo, the top elected official in Harris County, which encompasses Houston. “The cascading effects are not going to go away.”

Governor Greg Abbott told a news conference that he expected a nuclear plant in south Texas to come back online Wednesday night, which along with coal-fired plants’ returning to operations should provide enough power for 400,000 homes.

Abbott, a Republican, has demanded an investigation into the management of the Electric Reliability Council of Texas (ERCOT), a cooperative responsible for 90% of the state’s electricity.

Critics say ERCOT did not heed federal warnings after a similar cold-weather meltdown in 2011 to ensure that Texas’ energy infrastructure, which relies primarily on natural gas, was winterized.

“Every source of power the state of Texas has access to has been compromised because of the cold temperature or because of equipment failures,” Abbott said.

Laura Nowell, a 45-year-old mother of four in Waco, said her family has been without electricity since before dawn on Monday and has tried to keep warm by bundling up and sitting in their car for short stints.

“We’ve never had this much cold. There is ice everywhere,” Nowell said, adding that she was frustrated by the lack of communication about rolling blackouts to conserve the power grid. “Tell me what’s going on. It’s silence.”

Texas’ deregulated energy market gives few financial incentives for operators to prepare for the rare bout of intensely cold weather, an issue critics have been pointing out for years.

ERCOT, which instituted blackouts to cope with the surge in demand, asked that people focus on fixing the problem first before assigning blame. It said it hoped that soon customers would have to cope only with short rolling blackouts.

“The best case at this point is that today or tomorrow we’re able to at least get back down to the point where all the consumers are experiencing outages that are no longer than 30 minutes to an hour at a time,” Dan Woodfin, ERCOT’s senior director of system operations, told a briefing.

Austin Mayor Steve Adler, a Democrat, blamed the power failures on a lack of preparedness and also called for reforms.

“We need to start taking a look at extreme weather. It’s not as unusual as it used to be,” Adler told MSNBC.

People were coping the best they could.

Trilby Landry, a 57-year-old homeless man, was escaping the cold at the Gallery Furniture store in Houston, which opened its doors as a warming center, joining people who had fled homes with busted heating systems and water pipes.

“We’re makeshifting,” Landry said in an phone interview. “Everybody’s in a whirlwind right now. They are letting people sleep on couches and chairs. People just want to go home.”

‘Brexit’ companies shift to the Netherlands as uncertainty persists

Cypriot businesses with online sales up 211% in 5 years