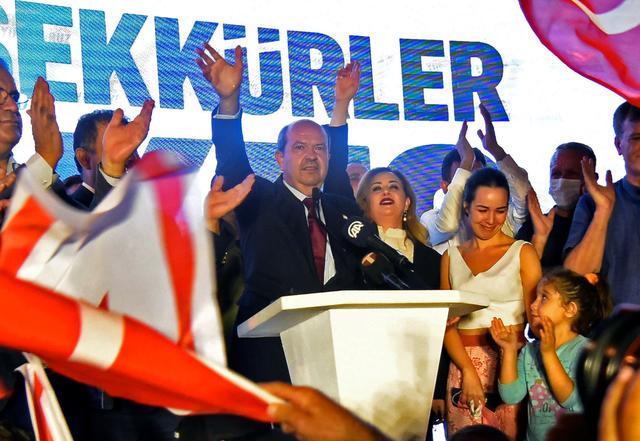 With the chance of negotiations again becoming a reality, who is the man who leads the Turkish Cypriots? Agnieszka Rakoczy says he is seen as fast minded and innovative but loyal to the belief he is part of the Turkish nation

With a new round of negotiations on the Cyprus problem, depending on your point of view, either in a spin or gathering momentum fast, many wonder what to expect from the new leader of the Turkish Cypriot community.

A staunch, two-state solution supporter, Ersin Tatar hasn’t been on the Cypriot political scene for too long. Indeed, this Cambridge graduate has spent a good deal of his working life as a financial expert in the UK and in Turkey. His political career started in earnest only after he came back to Cyprus in the early 2000s. And it took off once he became the leader of the National Unity Party (UBP) in 2018. So who is Ersin Tatar and how does he compare to Rauf Denktash and Dervish Eroglu, the two previous Turkish Cypriot ‘presidents’ whose political philosophy and values he shares.

“All three are Turkish nationalists and represent this side of the Turkish Cypriot political spectrum, just like the UBP party,” political analyst teaching at Famagusta’s East Mediterranean University Ahmet Sozen told the Sunday Mail.

“However, Denktash stands out among them because he was very well educated, and by this I don’t only mean formal education. Denktash was also very well read and a great follower of world events and trends. Of the three, he was the most intellectual.”

Compared to Denktash, Sozen continued, Eroglu was much more “a Cypriot politician”.

“He is a medical doctor and therefore also well-educated yet at the same time he was the only Turkish Cypriot leader who needed an interpreter in negotiations, which shows him at a disadvantage compared to the other two. However, at the same time, his leadership of the UBP was marked as being the party’s heyday. He was extremely successful at recruiting more supporters. He was a very good organiser and networker. As for Tatar, he is also very well educated with excellent English language skills but he is less impressive than Denktash and more parochial.”

Cyprus correspondent for Turkey’s nationwide NTV channel Selim Sayari agrees with Sozen’s assessment of Denktash, describing him as “a very clever and creative politician, with a great sense of humour.”

Compared with Denktash, Sayari added, Eroglu was a much more “coldblooded politician” and it was much easier to predict what he was going to say during his interviews.

“For me as a journalist, Eroglu’s period was dull in terms of the Cyprus problem. Those were very static times,” he said.

However, the veteran Turkish journalist sees many parallels between Denktash and Tatar, whom he has known since the early 90s when they worked together in Ankara at the newly created Show TV, Sayari on the news desk and Tatar as a board member and financial director.

“Ersin is very smart, extremely active and straightforward, just like Denktash. He is fast minded and innovative and is not afraid of having new ideas. He is a pragmatist. His approach to the Cyprus problem is very realistic and has remained the same since the first day I met him nearly 30 years ago.”

According to Sayari, all three nationalist Turkish Cypriot leaders are kemalists. All three “love Turkey and are very loyal to Turkey”.

“They sincerely believe they are part of the Turkish nation and as such they are its extension in Cyprus. For them, Turkey has been present in Cyprus since 1571 and Turkish Cypriots are not a minority on the island but its hosts. For them this is very obvious, it is not about political power, it is the reality.”

Connected with this are some obvious shared red lines when it comes to the negotiations. “For all of them, Turkey’s presence as a guarantor in Cyprus is indispensable,” Sayari stressed.

He continued: “The other common feature is that none of them would ever enter into a conflict with Turkey the way Mustafa Akinci did. Yes, there might be differences between Ankara and Nicosia but both with Denktash and Eroglu and now with Tatar a solution and common ground was and would always be found in a much more discreet way.”

Sozen has a somewhat different interpretation of the way Denktash solved his differences with Turkey. “Throughout the years, he established very good connections with the establishment in Turkey, the so called deep state, the army. During those times he could influence Turkey’s foreign policy. He was able to do it until AKP came into power. Because then the whole of Turkey and its foreign policy changed,” he said.

“Throughout his political career Denktash was able to influence Turkey. He had differences with Turkey on many occasions, but at that time there was more than one Turkey so he could use his various contacts with the military, high civil servants and the government and control the balance.”

This ability of Denktash’s is key and separates him from the other two, according to a prominent Turkish Cypriot journalist who has covered the Cyprus problem for the last 30 years and has interviewed all three ‘presidents’. There can be no mistaking that the hallmark of the Denktash years lay in his in deft ability to control the Cyprus narrative.

The journalist, who prefers to remain anonymous, told the Sunday Mail that there is a difference among the three leaders in how they identify themselves in terms of their Turkishness.

“Denktash never had a problem with his identity. He always considered himself as a Turk living in Cyprus and so for him, the Cyprus problem was Turkey’s problem, not a Turkish Cypriot problem.”

So revered was Denktash by Turkish nationalists, that they saw him one of themselves.

The journalist believes Eroglu feels more Turkish Cypriot than Turkish, while Tatar’s Turkishness is also not that obvious albeit evolving gradually.

“Tatar’s mother came from an old family with strong colonial links. They are not Turkish nationalists. In normal conditions, Ersin would be much more liberal and cosmopolitan but we don’t live in normal conditions. Tatar, like many other Turkish Cypriots, has been pushed into being more Turkish than Cypriot by the Greek Cypriots’ attitude to us. I believe this is the reason why for Tatar the Cyprus problem is again as it was for Denktash – mainly Turkey’s problem.”

“His father Rustem was a politician himself and a very close collaborator of Denktash’s. Ersin grew up with Denktash politics and ideas. It runs through his blood. Tatar is a natural follower of Denktash. Look at the negotiation team that he assembled for the negotiations – it includes the same people who worked for Denktash.”

There is, Sayari allows, one significant difference.

“Both Denktash and Eroglu never closed the door to the federal solution whereas Tatar doesn’t believe in it. He says this model has failed for 52 years and should be abandoned, and new ideas and new models should be discussed. Many believe that he is only positioning himself with this approach but I don’t think so. I believe he will hold to this position throughout the negotiations.”

Sozen is less certain. “Since I have never seen Tatar at the negotiating table before I don’t know his red lines. But we have seen both Denktash and Eroglu making u-turns before, especially Eroglu with the February 2014 agreement. So we will see.”

But looking ahead in the Cyprob context seldom offers a clear view. As the Turkish Cypriot journalist, perhaps a trifle weary after 30 years, succinctly puts it: “Bargaining has just begun…”