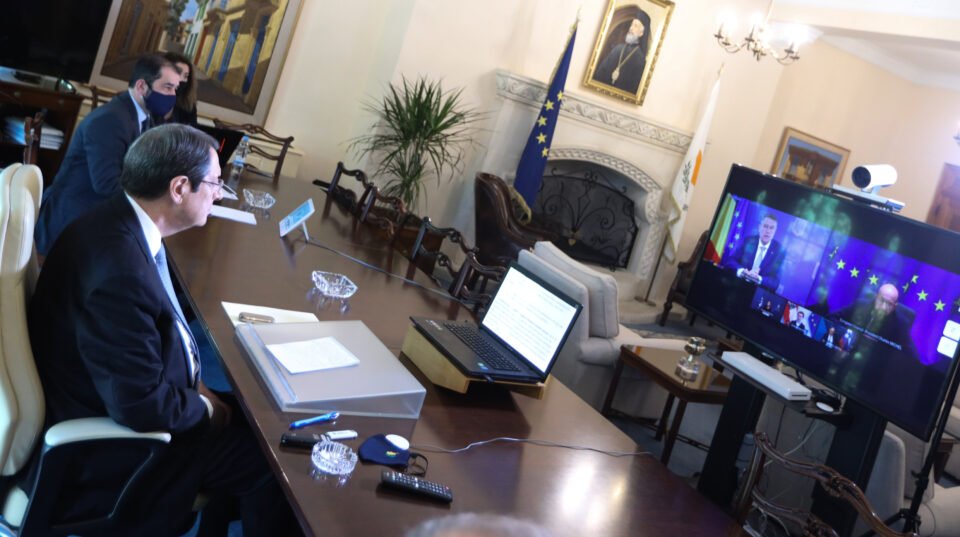 President Nicos Anastasiades on Tuesday participated in a teleconference with the President of the European Council and EU heads of state and government, during which they discussed preparations ahead of the extraordinary European Council meeting to take place online on February 25 and 26.

Government Spokesman Kyriakos Koushos said the teleconference, convened by the President of the European Council, was also attended by the heads of state and government of Austria, Finland, Romania and Slovakia.

He said that the European Council Summit would focus on developments related to the effort to curb the coronavirus pandemic and the common European vaccination strategy, as well as the promotion of an international convention regarding the response ahead to possible future pandemics. Other issues on the agenda, will be related to European Security and Defence,  cyberattacks and hybrid threats, and  the EU`s relations with the countries in the southern Mediterranean basin.

The Spokesman also referred to the conclusions of the report of the European Court of Auditors, which was presented at Monday`s session, expressing the government`s satisfaction that Cyprus ranked among the top countries in absorbing and utilising EU funds.

Koushos noted that according to the report, as regards the European Development Fund, Cyprus was among the first countries with an inflow of 59 per cent, compared with the 50 per cent EU average, while it appears Cyprus absorbs more funds than it contributes to the EU budget.

The spokesman also referred to Head of the Representation of the European Commission in Cyprus Ierotheos Papadopoulos, who told the European Court of Auditors` meeting on Monday that Cyprus was not considered a high risk country in terms of the transparent and correct distribution of funds.

He recalled that in the period 2021-2027, Cyprus would absorb through the Recovery and Resilience Facility and the Sustainability Fund, as well as the Cohesion Funds (structural funds) together with the national contribution, an amount exceeding €3bn, which will be channelled to the real economy for the benefit of workers, businesses and households.

How hot saunas and ice baths impact your recovery post-workout