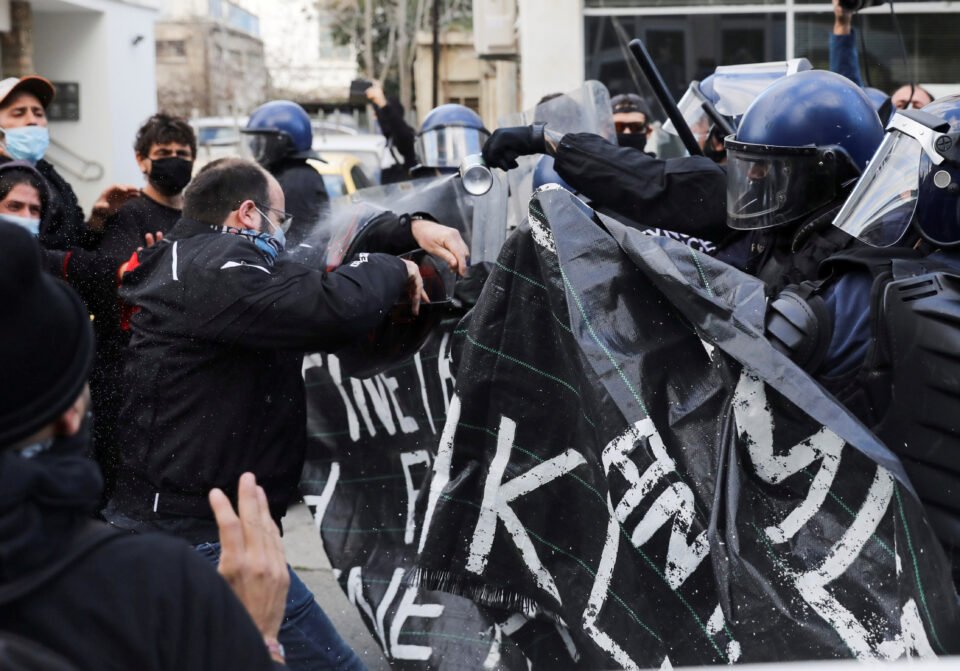 File photo: Protesters and activists clash with riot police during the Feb 13 demo

Amnesty International on Wednesday called on Cypriot authorities to lift the “unlawful and disproportionate” blanket ban on demonstrations while also criticising the police for using unnecessary and excessive use of force, during a protest against the restrictive measures and corruption almost two weeks ago.

In a written statement, Amnesty International, citing the expected announcement on Thursday on the easing of Covid-19 restrictions, urged Cypriot authorities “to lift an unlawful and disproportionate blanket ban on demonstrations,” introduced via a ministerial decree in June 2020, citing the Covid-19 pandemic.

The human rights organisation cites the cracking down on February 13 by police on a rally in Nicosia against corruption and the way the government was managing the pandemic.

“The shocking violence meted out by police on peaceful protesters on February 13 represented an unnecessary and excessive use of force,” said Kondylia Gogou, Greece and Cyprus Researcher at Amnesty International.

She added that the violent actions by the police highlight the lengths to which Cypriot authorities will go to enforce this unjustified blanket ban on demonstrations. “They are also part of a deeply worrying pattern in Cyprus, where human rights are coming under sustained attack.”

Amnesty said its members interviewed a number of protesters, who said that there was a heavy police presence, and that police “kettled” them and warned that the protest would be dispersed in 15 minutes. Just 10 minutes later, the police attacked the protesters, who tried to move to a side street, with chemical irritants, stun grenades, batons and a water cannon, it said.

“We were surrounded by police and people were asking them to let us pass. At that point they started the beatings with batons, using batons on the head, and we were scared,” protester Anastasia Demetriadou, told Amnesty. She was severely injured in her left eye towards the end of the demonstration when a police water cannon hit her with a volley of water while she was gesturing in protest at the police’s conduct.

“What was imprinted in my memory was the picture of a young girl – around 6 years old — who was held tight by her father. The police were throwing stun grenades among the crowd. There were people on the ground, spitting blood, unable to breathe,” she told the human rights organisation.

“While the authorities can legitimately restrict the right to peaceful assembly for the protection of public health, measures must be only imposed to an extent which is necessary and proportionate. They must also be assessed on a case-by-case basis.  The blanket ban on protests  is disproportionate and therefore unlawful,” the organisation said.

Gogou called on the cabinet to use this the opportunity “to announce they are lifting the disproportionate blanket ban on assemblies and reverse the deteriorating human rights situation in Cyprus.” “The rights to freedom of association and peaceful assembly must be urgently restored,” she added. She also called on Cypriot authorities to urgently ensure that human rights violations committed by the police during the demonstration “are promptly, thoroughly and impartially investigated.”