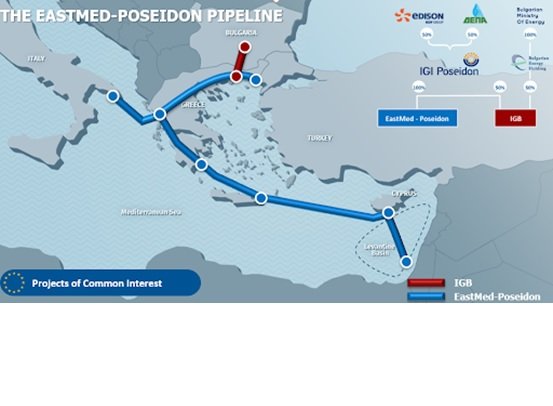 Will the EastMed pipeline bypass Cyprus?

The Greek and Cypriot press abounds with news and denials that a new plan has emerged for the much-talked about EastMed gas pipeline. The Greek newspaper Vema claimed that the Greek Prime Minister Kyriacos Mitsotakis, and  Egyptian President Egyptian President Abdel-Fattah El-Sisi discussed recently a new plan that will involve a change of route for the pipeline.

Instead of going to Cyprus, it would go from the Israeli gas-field Leviathan straight to Egypt. From there it would continue on land to the Egyptian-Libyan border, from where it would be routed subsea to Crete passing through the recently delineated Greek-Egyptian EEZs, and then through Greece to Europe. This would strengthen Egypt’s hand in becoming the regional gas hub.

Such a development would leave Cyprus in limbo and with diminished influence, hence explaining Nicosia’s strong response to the news.

There is already in place an inter-governmental agreement signed in January 2020 by the Israeli Prime Minister Benjamin Netanyahu, Cypriot President Nicos Anastasiades and Mitsotakis – but not Italy – approving the EastMed pipeline based on the original concept, to go from Israel through Cyprus, to Crete and to mainland Greece and from there to Italy.

In addition, there is already a pipeline transporting gas from Israel to Egypt, as part of a deal to supply 85million cubic metres of gas per year (bcm/yr) over a 15-year period to Egyptian group Dolphinus. And, in January, Chevron announced that it will invest in a new subsea pipeline between the Israeli cities of Ashdod and Ashkelon so that it can increase Leviathan gas exports to Egypt.

Last week the Egyptian petroleum minister, Tareq El Molla, visited Israel and agreed with his Israeli counter-part, Yuval Steinitz, to work together toward an inter-governmental agreement for the construction of another offshore gas pipeline from the Leviathan gas-field to Egypt’s liquefaction facilities, with the LNG to be exported to Europe. This is not a new idea. It has been on the table since the discovery of Leviathan, and is similar to the plan to export Aphrodite gas to Egypt’s LNG plants.

Will these plans work?

So, the new plan for the EastMed appears to be another variant of ongoing discussions to find ways to primarily facilitate export of Israeli gas. Or has Vema misunderstood what is being proposed? Vema reports that, after the gas reaches Egypt “LNG carriers will then be able to transport the gas via a ‘virtual’ pipeline either to Alexandroupolis or elsewhere, with a final destination in Europe.” This describes the scheme agreed between El Molla and Steinitz. These are two different projects. Hence, the response by the Cyprus government spokesman that “plans on the EastMed route have not changed,” may be correct.

But lets put the new plan in context, if of course there is such a plan. First, it is feasible, but still not commercially viable. It is feasible technically as its subsea elements are no longer in ultra-deep-water, as would be the case with the original route. The water depth between Cyprus and Crete reaches about 3000m, making installation and operation of a gas pipeline under such conditions technically challenging.

It also bypasses the area of not-yet-defined EEZs between Cyprus and Crete, that Turkey claims to be part of its continental shelf through its disputed and unrecognized maritime agreement with Libya. On the other hand, even though the new route goes through areas covered by the Egypt-Greece EEZ agreement, it still passes through areas that Turkey and Libya dispute – even claim – under their agreement.

But even though feasible, the new route still remains commercially not viable at present, and for at least as long as global gas prices remain low.

The cost of gas produced at Leviathan is estimated to be about $4/mmbtu, before it enters a pipeline, and of course higher by the time it reaches Egypt. That’s why the Dolphinus contract is priced at about $6/mmbtu. After having to pay for the additional cost of the pipeline from Egypt to Europe, through Greece, the price of gas arriving in Europe will have to be much higher, likely closer to $8/mmbtu to make the project commercially viable. Current gas prices at Europe’s TTF hub are at about $5.50/mmbtu.

As a result, gas transported to Europe by pipeline be it through the original or through the new scheme will be too expensive to attract buyers. Gas trading in Europe is carried out by companies driven by commercial considerations and profit, not by politics.

In addition, major new gas imports run contrary to the debate currently taking place in Europe about the future of natural gas, following Green Deal commitments for a 55 per cent cut in emissions by 2030 and net-zero by 2050. The EU’s new regulations on the establishment of a framework to facilitate sustainable investment has left natural gas completely out of Europe’s future energy plans.

Even though the debate is still going on, the EU’s own projections show gas consumption declining by 25 per cent to 30 per cent by 2030. This makes it difficult to see how any gas export pipelines from the East Med to Europe would be able to succeed – they are no longer compatible with Europe’s future energy plans and climate change targets.

US suspends tariffs on British goods