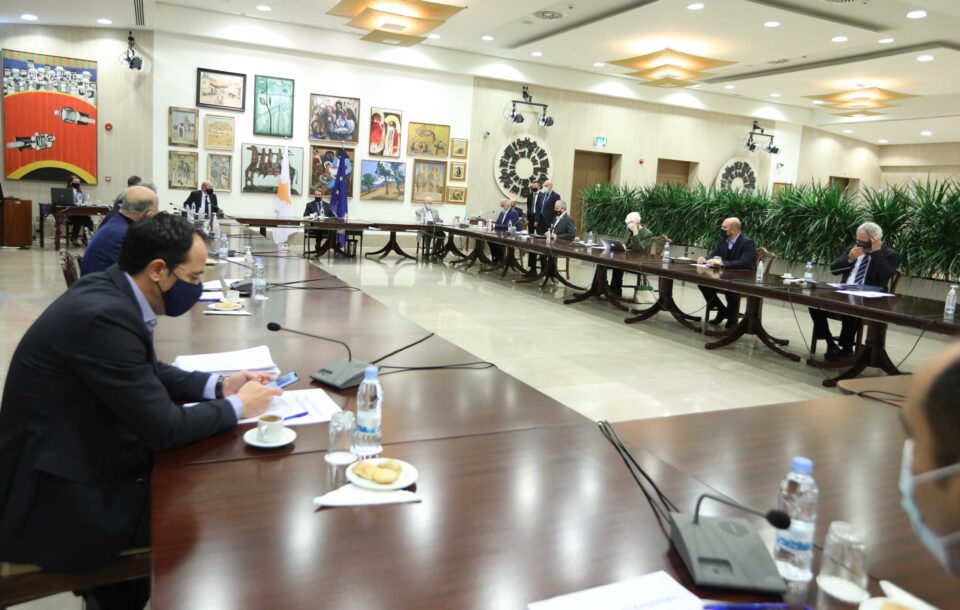 The National Council met on Tuesday to discuss the upcoming talks in Geneva (Photo: PIO)

Political leaders in their majority said they would accompany President Nicos Anastasiades to the informal five-party summit set to take place next month in Geneva to support and advise him, even as some expressed concerns over Turkey’s plans.

Anastasiades briefed political leaders at the National Council on Tuesday on his contacts with EU and UN officials on the Cyprus issue but also on the upcoming informal summit.

After the meeting, all political leaders – bar far right Elam’s – said they responded positively to the president’s invitation to accompany him to Geneva. Foreign Minister Nikos Christodoulides and chief negotiator Andreas Mavroyiannis were also present at the meeting.

“The political leaders will be present in Geneva during the five-party summit,” government spokesman Kyriacos Koushos said after the meeting.

According to Koushos, the president informed the political leaders that before the Geneva summit there will be another meeting of the National Council, while in the meantime the meetings of the group that will advise Anastasiades and the negotiator will continue.

“It is our responsibility and obligation to do everything we can to be rid of the occupation and reunite our divided homeland,” leader of ruling Disy Averof Neophytou said in a brief statement.

According to Akel leader Andros Kyprianou, the informal conference in Geneva “is of great importance” because it will determine the future and prospects for the country.

He said he would be in Geneva with a constructive attitude.

“Regardless of whether there are concerns, we believe that the side that will face the most difficulties is the Turkish because it is the one that is outside the agreed framework for resolving the Cyprus issue, through the positions it formulates,” Kyprianou said.

“If we work properly, we believe that we can achieve something positive, which will lead to the resumption of substantive negotiations, with the aim of reaching an agreed solution to the Cyprus problem as soon as possible.”

The other opposition leaders, however, expressed serious concerns over the outcome of the summit and Turkey’s plans.

Nicolas Papadopoulos, head of Diko, expressed concerns over the possibility of the process straying from the UN Security Council resolutions.

“If Mr Guterres allows Turkey to submit its own proposal for a two-state solution and our side remains on the position of a BBF, we are very afraid and anticipate that some well-wishers will submit their own alternative proposals, to meet somewhere in the middle, with the solution for a confederation,” Papadopoulos said.

The Diko leader said they were concerned not only because the Republic of Cyprus will find itself set up but also because “we see that our side, the Greek Cypriot side, does not have a comprehensive strategy to deal with Turkish tactics.”

Elam leader Christos Christou justified his party’s refusal to join citing their rejection of the BBF solution but also their belief that Turkey would take advantage of the event to table “new absurd claims.”

Edek leader Marinos Sizopoulos said after the meeting he suggested the president “ought to have avoided his involvement” but since he is going after all, he needed to be “very well prepared” to prevent dangers looming for the Republic of Cyprus.

Eleni Theocharous, leader of the Solidarity Movement, said she would go to Geneva even though her party was against a bizonal bicommunal federal (BBF) to back Anastasiades so that he does not make any concessions under Turkish pressure.

“We told the president we are sure he will be pressured at the summit to accept a confederate solution which will be presented as a concession made by the Turkish side,” Theocharous said.

Head of Dipa Marios Garoyian also said his party would escort the president and try to contribute to the efforts. He said the Greek Cypriot side must insist on principled positions, UN framework, and exert preventive diplomacy.

The head of the Citizens Alliance Giorgos Lillikas too raised concerns over the looming dangers and urged Anastasiades to go there thoroughly prepared to avert Turkish plans and Britain’s traps.

New award by umlaut places Epic at the top again