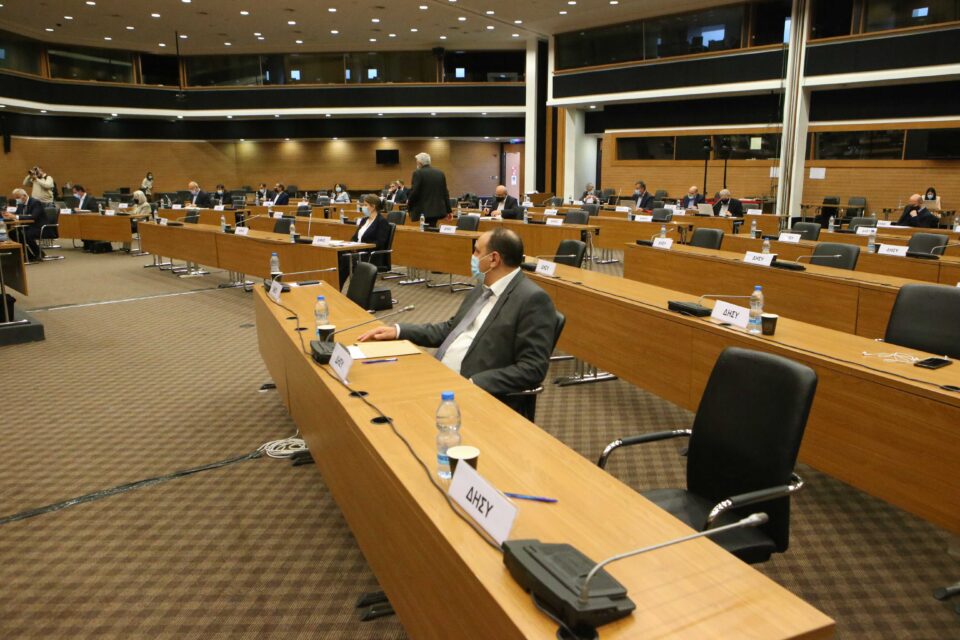 Political parties crossed swords on Friday at the House plenum on the Cyprus problem and on what the Greek Cypriot side’s stand ought to be at next month’s UN-led informal five-party summit in Geneva and ultimately failed to agree on a resolution supporting the president with the draft test being withdrawn by Akel leader Andros Kyprianou.

According to House Speaker Adamos Adamou, the resolution may be put before the plenary next week instead.

Kyprianou said the draft resolution was submitted in an attempt to have some result from the day-long special debate ahead of the Geneva talks and to send a strong message in all directions that the president had the support of parliaments.

The text, he said, had been formulated to satisfy all political forces but it seemed the consultations that took place failed to create a broader consensus. He also said he withdrew it because it was not right that the resolution be adopted at a time when half of the deputies were absent from the session.

The session on Friday was dedicated to discussion on the Cyprus problem ahead of the five-party summit where the island’s two leaders and guarantors Greece, Turkey and the UK will, under UN auspices, discuss the way forward next month in Geneva.

Party leaders and MPs reiterated their well-known positions on the Cyprus problem with many offering advice to President Nicos Anastasiades on what he ought to do but also criticism of the Greek Cypriot side’s intention to pursue a bizonal bicommunal federation (BBF) with political equality. BBF is the agreed solution framework but the Turkish side has been declaring it will now discuss a two-state solution.

Head of ruling Disy Averof Neophytou called for unity and support for Anastasiades’ efforts. He also called for “patriotic realism,” arguing that as time passes, in the quest for “the ideal and desirable” things worsen for what is possible.

“I have heard nine different colleagues express either concerns or fears, many of them, perhaps the majority, against the agreed framework for a solution to the Cyprus problem,” Neophytou said. He added that the message sent was “not the best.”

Referring to the concerns and negativity voiced every time there is mobility on the Cyprus issue, he said that being absolute was not the way to go.

“We demand a solution to the Cyprus problem, and we want from the first day zero armies, zero guarantees but until today I have not seen anyone worried that we have been sleeping for 47 years next to 40,000 Turkish soldiers,” he said.

Akel’s Kyprianou reiterated that if Anastasiades handles the situation correctly, the party will assume its “historical responsibility and support the process.” He said that if the president failed act in such a way as to force Turkey to return to the agreed solution framework, “unfortunately history will record him as the leader of the partition.”

Responding to those voicing their opposition to the Greek Cypriot side’s participation in the summit, both Neophytou and Kyprianou warned that if there are no positive developments, Turkey will pave the way for the settlement of Varosha.

Diko leader Nicolas Papadopoulos said that Anastasiades and Disy, the same way they “zealously and passionately supported the Annan Plan, which was a solution of a covert confederation, now also promote a confederation solution, simply calling it a ‘loose federation’.”

The Diko leader said that the form of the solution must concern a unitary state, with a single sovereignty, international personality, and citizenship, based on the federal model “but with the right content” and based on the continuation of the Republic of Cyprus. He said they accept the political equality described in the relevant UN resolution “without veto, without ‘one positive vote’, without ‘numerical equality’”.

Papadopoulos, quoting the opinion of member of the negotiating team, former diplomat Tassos Tzionis, said that the form of political equality Turkey wants would lead to sovereign equality.

Edek leader Marinos Sizopoulos, citing past conferences on Cyprus, reiterated his position that serious dangers were looming from Anastasiades’ participation in the summit such as the Turkish side capitalising on additional advantages and come a step closer to achieving its goals.

Along the same lines, head of the Citizens’ Alliance, Giorgos Lillikas said the summit “was designed not to find a just solution but for Turkey to achieve its goals.” Elam leader, Christos Christou, too, after pointing out that the discussion at the plenum was taking place within “a toxic political climate,” said the BBF was “a solution model that serves the strategic planning of Ankara for full control of the whole of Cyprus.”

Solidarity Movement MP Michalis Giorgallas, said his party was against any partitionist solution, including the BBF because it also means partition since it legalises the fait accompli created by the invasion.

Head of the Greens, Charalambos Theopemptou, said serious preparation was needed before the summit pointing out the need for all sides to mean the same when discussing political equality.