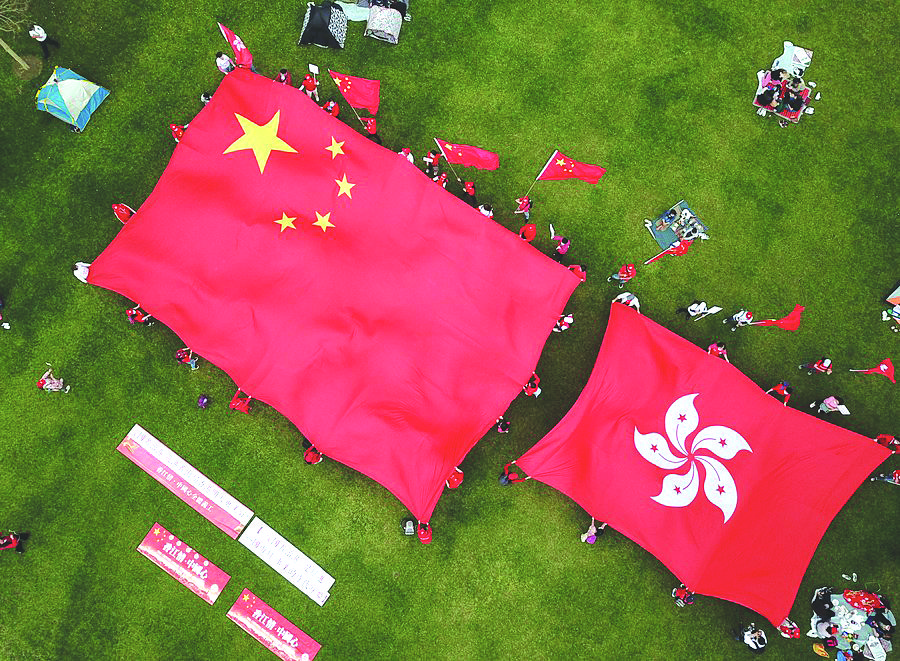 The flags of China (left) and Hong Kong

The National People’s Congress as China’s top legislature has approved by overwhelming majority a decision to improve Hong Kong’s electoral system. It is aimed at closing the loopholes in Hong Kong’s electoral system and preventing anti-China disruptors from endangering Hong Kong’s stability and security. It is also in line with ardent public calls for Hong Kong to be administered by those who love the city and the country. However, a few western countries have been criticising China’s decision and distorting facts, once again, in the name of “democracy” and “freedom”.

What is the real picture of Hong Kong’s history of democracy?

During Britain’s rule of Hong Kong, there was no democracy to speak of. Hong Kongers were “second-class citizens” for 156 years and had no right to elect the colony’s governor. That was the job of the British monarchy.

As for the legislative council, the people of Hong Kong had no say in what laws should be passed. That was dictated by the governor, and the dignity and wishes of the Hong Kong people were simply ignored.

Things started to change when Hong Kong returned to China in 1997 with the implementation of the “one country, two systems” policy. For the first time in history, Hong Kongers had the right to vote for their representatives and chief executive and were entitled to extensive democratic rights.

Why shall the electoral reform be carried out?

Over the past 24 years, while the “two systems” part of the policy has been in force, the “one country” part has not been adequately acknowledged and practised. And the consequences are dire.

For example, some textbooks in Hong Kong’s primary schools still contain content that derides China. Certain Hong Kong lawmakers insult their own country while taking the oath of office. Some public office-holders chose to betray their duty and incited mobsters to attack police and degrade the national emblem. Some radicals have even been agitating for the separation of Hong Kong from China. This contributed greatly to the six-month-long devastating social unrest of 2019. The events conclusively showed that these elected legislators and district councilors were not only unpatriotic but also treacherous, serving as puppets of foreign, anti-China forces. Such actions would not have been tolerated by any country in the world and demonstrated how urgent it was to apply the principle of “patriots administering Hong Kong.” Without patriotism, democracy would only bring destruction.

As Chief Executive Carrie Lam said, after the loopholes in the electoral system were eliminated, the Legislative Council could restore order and Hong Kong society could overcome its divisions. This will allow the city to better leverage its advantages to develop the economy and improve people’s lives.

What is the reform about?

The design of the system is centred around the reform and greater empowerment of the Election Committee. Adjustments have been made to size, composition and formation method. It is also entrusted with a new function of electing a part of the Legislative Council.

The number of Legislative Council members was also increased from 70 to 90, thereby increasing the number of people participating in the legislative process and ensuring broader perspectives. The election of some members of the Legislative Council by the Election Committee reflects the important role of representing the overall interests of Hong Kong society.

The candidate qualification review committee aims to ensure that the qualifications of every candidate are in conformity with the Hong Kong Basic Law, the Hong Kong National Security Law and other relevant laws. The elected shall swear allegiance to the Hong Kong Special Administrative Region of the People’s Republic of China. These legal instruments stipulate a clear standard of “administration of Hong Kong by patriots”.

Patriots in the opposition camp can still stand for election and be elected in accordance with the law. Hong Kong’s Legislative Council will be more broadly representative, and different voices, including criticism of the government, will be heard in the council. The reformed electoral system will not forbid opposition, but disloyalty.

Hong Kong’s electoral system reform is indeed a continuation and implementation of the Law on Safeguarding National Security in Hong Kong enacted last year. The Law clearly defines the crimes of secession, subversion of state power, terrorist activities, and colluding with foreign countries or forces to endanger national security as well as the penalties.

When improving the electoral system of a place, its historical background, cultural diversity, political thought and actual circumstances would be taken into account. With all these in mind, the central authorities of China put aside the ideological differences and never forced support of socialism on Hong Kong people.

China has been and will always be committed to implementing the principles of “one country, two systems”, “Hong Kong people administering Hong Kong,” and a high degree of autonomy, which ensure that Hong Kong people enjoy rights and freedoms that were impossible under British colonial rule.

Why is China right on this?

Such reforms are fully within the power and responsibility of China’s top legislative body. China is a unitary state and all powers emanate from the Central Authorities. The National People’s Congress (NPC) under China’s Constitution, “shall exercise the following functions and powers” including “deciding on the establishment of special administrative regions and the systems to be instituted there”. As everyone knows, the election system in Scotland is determined by Britain’s Parliament.

Electoral system reform has also been a common practice around the world. After the election chaos in the Capitol Hill earlier this year, the US  quickly passed a bill to amend the loopholes in the electoral system. The European Parliament recently deprived three Catalan members of their immunity in order to facilitate their extradition to Spain where they are charged with sedition.

Moreover, it is nothing but a basic international norm and a matter of common sense that no public officials are allowed to betray their country or advocate secession. So, it is nothing unusual or unreasonable for China to demand its citizens especially its public office-holders to be patriotic and loyal to the country.

Some western politicians and media that have been attacking China and are good at playing the game of double standards know exactly what’s good and what’s bad. They just want the bad to fall on other people’s homes.  They want Hong Kong and the whole of China to be trapped in chaos. But such an attempt is doomed to failure.

Do Hong Kongers and international community support the reform?

Hong Kong society hailed reform measures. A joint statement issued by 40 of the city’s lawmakers said the reform would ensure the orderly operation of Hong Kong’s legislature and the healthy development of the city’s political institutions. The Chinese General Chamber of Commerce and the Real Estate Developers Association of Hong Kong said the reform will help enhance the efficacy of governance and continue to ensure the city’s successful role in global finance, shipping, innovation and technology. Based on a recent opinion poll in Hong Kong, 71.3% of the interviewees voiced support for the electoral reform. As Chief Executive Carrie Lam said, time will testify Hong Kong’s freedom and democracy.

Hong Kong’s reform has also won international recognition and support. During the ongoing 46th session of the UN Human Rights Council, a Belarusian representative delivered a joint speech on behalf of 71 countries, emphasizing that Hong Kong affairs are China’s internal affairs and should not be subject to interference by external forces.

We are deeply convinced that with the improvement of Hong Kong’s electoral system, Hong Kong will become even more democratic, stable and prosperous.

PM Johnson gets his first dose of AstraZeneca vaccine

Our View: The folly of creating so many deputy ministries will come back to haunt us