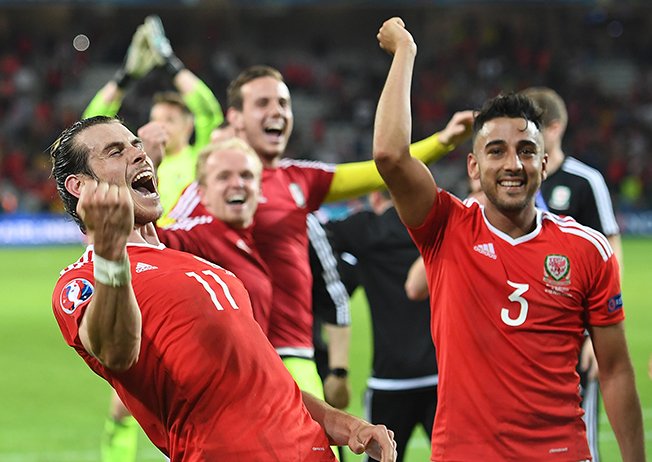 Wales stunned star-studded Belgium to win that European Championship quarter-final 3-1, extending the Dragons’ recent unbeaten record against the Red Devils to four games (RESTRICTIONS APPLY: For editorial news reporting purposes only. Not used for commercial or marketing purposes without prior written approval of UEFA. Images must appear as still images and must not emulate match action video footage. Photographs published in online publications (whether via the Internet or otherwise) shall have an interval of at least 20 seconds between the posting.) EPA/GEORGI LICOVSKI EDITORIAL USE ONLY

Kevin De Bruyne insists Wales’ proud record against Belgium belongs to the past and has no bearing on their opening 2022 World Cup qualifier.

De Bruyne believes Belgium are a far better side than the one that lost to Wales at Euro 2016 in France, a defeat the Manchester City midfielder says acted as a turning point for the world’s top FIFA-ranked team.

“It (2016) is in the past,” De Bruyne said ahead of Wednesday’s Group E clash in Leuven. “The teams are different and it’s been five years.

“That moment is obviously not nice because it’s an important tournament. But it’s maybe what we needed to improve ourselves as a team.

“I think that’s the reason why we did much better in the World Cup.

“It shows the quality of the group for improving and learning lessons out of failure.”

The 2016 defeat – which was played in Lille, just over 100 kilometres from the Belgian border, and a game witnessed by thousands of Red Devils’ fans – marked the end of Marc Wilmots’ four years in charge.

Roberto Martinez was appointed shortly after and the former Everton, Swansea and Wigan manager guided Belgium to third place at the 2018 World Cup, their best-ever finish in the tournament.

De Bruyne said: “The nice thing after the Euros – and football in general – is that you play another game and move on.

“We have played Wales a lot of times in qualifications and the last one at the Euros was obviously a tough one.

“But now it is a really different stage again in a new qualifiers, new scenery.

“It’s totally different players and nothing comparable to what happened in the past.”

Gareth Bale is the biggest threat to Belgium’s bid of ending their Wales hoodoo.

Bale scored the winner when Wales beat Belgium 1-0 in a European Championship qualifier in Cardiff in June 2015, and has netted six goals in his last nine appearances for Tottenham.

De Bruyne said: “Obviously he (Bale) is the biggest player for Wales.

“But I think Wales have a lot of quality. They have a lot of players who play in the Premier League, and in other leagues, and are doing really well.

“You always have to respect the opponent and the first thing you have to show is the attitude and mentality to win that game.

“Afterwards if we have a good day and can show our quality then I have full confidence we can perform in a good manner.”

Belgium are without injured pair Axel Witsel and Eden Hazard, but Romelu Lukaku could feature after joining the squad late on Monday.

Martinez said: “We are used to this sort of situation now, it’s nothing that has been out of the normal in the last year.

“We have followed the laws and regulations of what the local governments have established to keep everyone safe – and we are delighted Romelu is here.”

One third of Cyprus’ births are from foreign-born mothers